What’s the latest on the Canadiens’ efforts to shop a surplus forward? Could the Golden Knights become a trade target for teams seeking a goalie? Find out in today’s NHL Rumor Mill.

THE LATEST ON THE CANADIENS 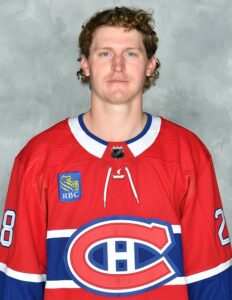 Dadonov and Drouin are both pending unrestricted free agents who are struggling with the Canadiens and might benefit from a change of scenery. Dvorak could be more enticing to other clubs. He carries an affordable $4.45 million average annual value through 2024-25 and his play is improving after a slow start.

D’Amico suggested Dvorak’s strengths as a penalty killer and winning faceoffs could interest the Ottawa Senators and Philadelphia Flyers. The Senators apparently had an interest in Dvorak during the offseason and recently lost center Josh Norris to shoulder surgery while Flyers center Sean Couturier is out for at least four months due to back surgery.

Dadonov or Drouin could be a fit with the injury-ravaged Capitals’ forward lines if young Connor McMichael or call-up Sonny Milano fail to stick. The rebuilding Anaheim Ducks could also be a destination for either guy. The Canadiens have the luxury of retaining 50 percent of Dadonov’s or Drouin’s salary to facilitate a trade.

SPECTOR’S NOTE: Dvorak is the best of this bunch but I think Canadiens general manager Kent Hughes prefers to retain him for the time being. The very things that could make him attractive in the trade market also make him a key player as their second-line center.

Washington Hockey Now’s Sammi Silber acknowledged TSN’s Pierre LeBrun’s recent report of the Canadiens talking trade with the Capitals. However, she doubts they’ll be enticed by Dadonov, Drouin or the equally struggling Mike Hoffman. The Capitals’ recent claim of Nicolas Aube-Kubel off waivers from the Toronto Maple Leafs probably brings any further trade discussion with the Habs to a close for now.

WILL TEAMS COME CALLING FOR A GOLDEN KNIGHTS GOALTENDER?

VEGAS HOCKEY NOW: Owen Krepps speculates the Golden Knights could draw interest from clubs in need of goaltending depth. They currently using Logan Thompson and Adin Hill as their goalie tandem while Laurent Brossoit is with their AHL affiliate on a conditioning stint after returning from offseason hip surgery.

The Golden Knights currently lack sufficient cap space to bring Brossoit back into the lineup. They could decide to trade him.

Krepps believes there are several clubs in need of help between the pipes. The Toronto Maple Leafs are relying on AHL call-ups with Matt Murray and Ilya Samsonov sidelined. So are the Chicago Blackhawks with Petr Mrazek and Alex Stalock on the shelf. Boston Bruins netminder Jeremy Swayman is week-to-week while the Minnesota Wild tandem of Marc-Andre Fleury and Filip Gustafsson has struggled through the early going.

SPECTOR’S NOTE: The Leafs recently indicated Murray could return within the next few days while the Blackhawks expect Mrazek back in the lineup soon. The Bruins will likely ride things out with Linus Ullmark and call-up Keith Kinkaid for the time being while Fleury and Gustafsson have improved since their shaky starts in October.

Nevertheless, one of those clubs could express an interest in Brossoit if their injured players suffer a setback or their regular tandems continue to struggle.

← NHL Morning Coffee Headlines - November 7, 2022 NHL Morning Coffee Headlines - November 8, 2022 →
We use cookies on our website to give you the most relevant experience by remembering your preferences and repeat visits. By clicking “Accept”, you consent to the use of ALL the cookies.
Do not sell my personal information.
Cookie SettingsAccept
Manage consent