NHL.COM: Florida Panthers captain Aleksander Barkov had a five-point performance (including a first-period hat trick) in a 7-2 drubbing of the Montreal Canadiens. Barkov had missed three games with a lower-body injury. Matthew Tkachuk scored twice for the Panthers as they improved to 16-16-4. The Canadiens (15-18-3) have dropped four straight games. 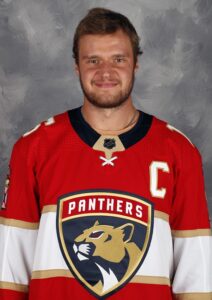 SPECTOR’S NOTE: The Canadiens welcomed back Brendan Gallagher after he was sidelined for 13 games by a lower-body injury. Habs defenseman Kaiden Guhle left this contest late in the third period with an apparent leg injury. There was no post-game update regarding his condition.

A hat trick by Mark Scheifele carried the Winnipeg Jets (22-13-1)over the Vancouver Canucks by a score of 4-2. Jets forward Pierre-Luc Dubois scored on a penalty shot while teammate Sam Gagner skated in his 1,000th career NHL game. Collin Delia made 35 saves for the Canucks, who drop to 16-16-3.

SPECTOR’S NOTE: It was a costly victory for the Jets as defenseman Josh Morrissey left the game in the third period following a hit by Canucks blueliner Tyler Myers. Head coach Rick Bowness claimed Morrissey had a “little bit of a lower-body injury” but anticipates he’ll be able to play on Saturday against the Edmonton Oilers.

Buffalo Sabres captain Kyle Okposo also had a hat trick while Casey Mittlestadt tallied twice in a 6-3 victory over the Detroit Red Wings. The Sabres (17-14-2) have won five straight games. Dominik Kubalik scored two goals for the Red Wings as they dropped to 15-12-7.

The San Jose Sharks’ Erik Karlsson became the first defenseman to reach 50 points this season but his club fell 4-3 to the Philadelphia Flyers (12-17-7) on an overtime goal by Tony DeAngelo. Karlsson collected two assists to extend his points streak to 11 games while teammate Tomas Hertl scored twice for the 11-19-7 Sharks. Travis Konecny tallied twice for the Flyers as they overcame a 3-1 deficit to force overtime.

SPECTOR’S NOTE: Karlsson is having what could become a career-best performance. With 50 points in just 37 games, he’s on pace to exceed his previous high of 82 points and could become the first blueliner to reach 100 points since Brian Leetch in 1991-92.

The Dallas Stars (22-9-6) moved into first place in the Western Conference by beating the Minnesota Wild 4-1. Tyler Seguin scored two goals and Jake Oettinger kicked out 23 shots as the Stars are tied with the Vegas Golden Knights with 50 points but hold first place with a game in hand. Kirill Kaprizov tallied his 20th goal of the season for the 20-13-2 Wild.

Tampa Bay Lightning forward Brayden Point scored his 20th goal of the season as his club downed the New York Rangers 2-1 on a shootout goal by Alex Killorn. Andrei Vasilevskiy made 45 saves through regulation and the shootout as the Lightning rose to 22-11-1. Mika Zibanejad scored for the Rangers (19-12-6) in regulation while Igor Shesterkin made 39 stops.

SPECTOR’S NOTE: Point became the fifth player in Lightning history to reach the 20-goal plateau in at least six straight seasons. Meanwhile, there were some raised eyebrows when the Rangers announced former first-overall pick Alexis Lafreniere was a healthy scratch for this game.

The Arizona Coyotes scored four unanswered goals (two by Jack McBain) to upset the Toronto Maple Leafs 6-3. Barrett Hayton had a three-point performance for the 13-16-5 Coyotes while Conor Timmins collected two assists for the 22-8-6 Maple Leafs.

A shootout goal by Viktor Arvidsson lifted the Los Angeles Kings to a 5-4 win over the Colorado Avalanche. Arvidsson also collected two assists in regulation as the Kings (21-12-6) extended their points streak to seven games (6-0-1). With 48 points, they’re now two behind the Pacific Division-leading Vegas Golden Knights.

Ottawa Senators winger Alex DeBrincat scored the game-tying and winning goals to defeat the Washington Capitals 4-3. Claude Giroux picked up two assists as the Senators improved to 16-16-3. Alex Ovechkin and Evgeny Kuznetsov scored for the 20-13-5 Capitals.

The New York Islanders topped the Columbus Blue Jackets 2-1 on goals by Jean-Gabriel Pageau and Mathew Barzal. The Islanders improved to 21-14-2 with their third straight victory while the Blue Jackets (10-22-4) suffered their seventh straight defeat.

Goals by Calle Rosen and Brandon Saad gave the St. Louis Blues (17-16-3) a 3-1 win over the Chicago Blackhawks to snap a three-game losing skid. Patrick Kane scored for the Blackhawks (8-22-4), who have lost 18 of their last 20 contests.

PITTSBURGH HOCKEY NOW: Penguins captain Sidney Crosby received an appointment for the Order of Canada for “being one of the greatest hockey players of all time and for supporting community service initiatives for youth.”

SPECTOR’S NOTE: Congratulations to Crosby on receiving one of Canada’s highest honors.

TSN: Speaking of the Devils, winger Andreas Johnsson cleared waivers yesterday and was assigned to their AHL affiliate in Utica.

DETROIT HOCKEY NOW: Former NHL winger Barry Cullen passed away on Dec. 16 at the age of 87. He spent five seasons in the league between 1955-56 and 1959-60 with the Toronto Maple Leafs and the Red Wings, finishing with 32 goals and 84 points in 219 games. Cullen’s brothers, Brian and Raymond, also played in the NHL. In his post-playing career, he owned a successful car dealership in Guelph, Ontario.