The Bruins defeat the Penguins in the 2023 NHL Winter Classic, the three stars of the week are announced, plus updates on sidelined stars such as Ryan O’Reilly and John Carlson in today’s NHL Morning Coffee Headlines.

NHL.COM: The Boston Bruins defeated the Pittsburgh Penguins 2-1 at the 2023 NHL Winter Classic at Fenway Park. Jake DeBrusk tallied the game-tying and winning goals in the third period for the league-leading Bruins (29-4-4, 62 points) as they extended their home points streak to 22 games. Kasperi Kapanen scored for the Penguins (19-12-6) as they’ve lost five straight games. 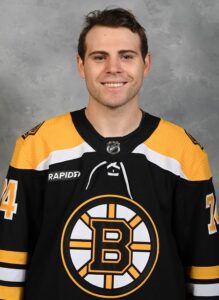 SPECTOR’S NOTE: Penguins goaltender Tristan Jarry left the game in the first period with a lower-body injury. No update was provided on his condition following the game.

The Pens also played without defenseman Kris Letang, who returned home to Montreal following the death of his father. He remains day-to-day with a lower-body injury. My condolences to Letang and his family for their loss.

Vegas Golden Knights forward Nicolas Roy scored twice as the Vegas Golden Knights held off the Colorado Avalanche 3-2. With the win, the Golden Knights (26-12-2) regained first place in the Western Conference with 54 points and sit two up on the Dallas Stars. Nathan MacKinnon had a goal and an assist for the 19-14-3 Avalanche, who’ve dropped four games in a row.

The Philadelphia Flyers (14-17-7) picked up their third straight win with a 4-1 victory over the Anaheim Ducks. Travis Konecny had a goal and an assist while goaltender Samuel Ersson made 28 saves. Ryan Strome replied for the Ducks, who dropped to 10-24-4.

The Seattle Kraken will host the Vegas Golden Knights at the 2024 NHL Winter Classic on Jan. 1, 2024, at T-Mobile Field.

SPECTOR’S NOTE: I’m taking a victory lap having predicted this during a Bleacher Report roundtable last week. OK, I picked the wrong stadium where they’d play but I’m not sweating the minor details here.

TSN: Bad news for the St. Louis Blues as captain Ryan O’Reilly (broken foot) will be sidelined for six weeks while winger Vladimir Tarasenko (hand injury) will be out for four weeks.

SPECTOR’S NOTE: The Blues are struggling to stay in the Western Conference playoff race. Losing their two core forwards for a month could sink their postseason hopes.

THE ATHLETIC: Tarik El-Bashir recently reported Washington Capitals defenseman John Carlson could be sidelined for months with a head injury suffered against the Winnipeg Jets on Dec. 23. His estimated return could be late in the regular season.

SPECTOR’S NOTE: The Capitals will miss Carlson’s presence on the blueline. He had 21 points in 30 games this season before his injury.

DETROIT HOCKEY NOW: The Red Wings have extended Jakub Vrana’s conditioning stint with their AHL affiliate from three days to the full two weeks. He only played two games with the Wings this season before voluntarily entering the NHL/NHLPA player assistance program in mid-October.

DAILY FACEOFF: Top NHL prospect Connor Bedard broke the Canadian World Junior record for all-time goals (16) and points (33) to lead Canada to a 4-3 overtime victory over Slovakia in the quarter-final of the 2023 World Junior Championships.

SPECTOR’S NOTE: Bedard was considered the top prospect in the 2023 NHL Draft prior to the 2023 WJC. His performance in this tournament will cement his spot in that position.