Will the Senators re-sign or trade Alex DeBrincat? Are they still trying to move Nikita Zaitsev? What’s the latest on the Coyotes? Find out in today’s NHL Rumor Mill. 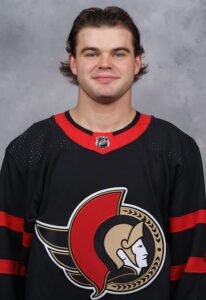 DeBrincat carries an average annual value of $6.4 million on his current contract. However, he’s earning $9 million in actual salary, which is what it’ll cost the Senators to qualify his rights this summer.

Warren speculates DeBrincat is in the running for a long-term contract worth between $8 million and $9 million. However, he wondered if the Senators’ existing managing board would approve such a deal, especially with the team up for sale and new ownership looming in 2023.

The Senators also have Brady Tkachuk, Tim Stutzle and Josh Norris on long-term deals each worth around $8 million annually. Given the state of their blueline, Warren mused over whether the money that would go to DeBrincat would be better spent improving the defense corps. If they remain out of playoff contention, perhaps they’ll contemplate shopping DeBrincat before the March 3 trade deadline.

SPECTOR’S NOTE: The Senators gave up a lot to acquire DeBrincat from the Blackhawks knowing full well what his contract situation was going to be. Unless the DeBrincat camp seeks over $10 million annually, I believe the Sens will re-sign him to a long-term deal worth close to $9 million annually.

ESPN’s Kevin Weekes reported Sunday the Senators are actively trying to trade defenseman Nikita Zaitsev. “They’ve granted permission to his representatives to speak with clubs,” writes Weekes, adding they’re willing to include a high draft pick or a prospect to accommodate a trade.

SPECTOR’S NOTE: Zaitsev carries an average annual value of $4.5 million through 2023-24. That’s why they’re trying to trade him and have been doing so since November. He’s currently on injured reserve with a lower-body injury.

The inability to find any suitors thus far for Zaitsev is the reason behind the Senators’ willingness to package a high pick or a prospect in the deal. They seem desperate to get that contract off their books. It remains to be seen if they can pull it off.

UPDATE ON THE COYOTES

Everyone knows defenseman Jakob Chychrun wants to be traded. He has 17 points in 19 games since returning from offseason wrist surgery in November. The Coyotes’ likely asking price is two first-round picks and either a second-round pick or a prospect. Chychrun earns an AAV of $4.6 million for the next two seasons but his actual salary rises to $5.4 million next season and $7 million in 2024-25.

Blueliner Shayne Gostisbehere is a pending unrestricted free agent rearguard on pace for 61 points this season. His AAV is $4.5 million but his actual salary this season is $1 million as his $2.5 million signing bonus was paid out at the start of the season. Morgan believes it makes little sense to move Gostisbehere for less than a second-round pick.

A dark horse trade candidate is goaltender Karel Vejmelka. Morgan wondered if clubs might have faith in Vejmelka’s body of work to offer up something meaningful. If not, does it make any sense to move him? Morgan suggests doing so could hurt the Coyotes’ morale.

SPECTOR’S NOTE: I think Chychrun’s a goner by deadline day if he remains healthy and productive. Gostisbehere will also likely be skating with a contender by March 3.

As for Vejmelka, he’s signed through 2024-25 with a very affordable $2.7 million AAV and hasn’t asked to be traded. The 26-year-old goalie should have a place as part of their long-term plans. Unless the Coyotes get an irresistible offer, I don’t see them moving Vejmelka.

← NHL Morning Coffee Headlines - January 2, 2023 NHL Morning Coffee Headlines - January 3, 2023 →
We use cookies on our website to give you the most relevant experience by remembering your preferences and repeat visits. By clicking “Accept”, you consent to the use of ALL the cookies.
Do not sell my personal information.
Cookie SettingsAccept
Manage consent