SPORTSNET: Jeff Marek reports that it sounds like long-time Chicago Blackhawks stars Patrick Kane and Jonathan Toews aren’t prepared to make a decision on their respective futures until sometime in mid-February.

Marek also believes Carolina Hurricanes winger Max Pacioretty’s season-ending injury could make things interesting for Kane and Toews and maybe other players who could move by the trade deadline. 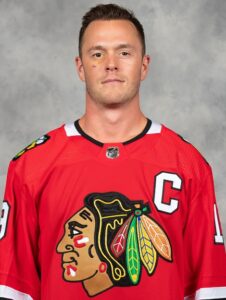 SPECTOR’S NOTE: The Hurricanes need a second-line center and could use a winger to replace the sidelined Pacioretty’s offense. Toews or Kane could fit into one of those roles in Carolina.

Sportsnet’s Ryan Dixon and Jason Bukala included the Hurricanes among their four suggested trade destinations for Toews along with the Boston Bruins, Colorado Avalanche and Winnipeg Jets.

Marek reports the Vancouver Canucks’ asking price for Bo Horvat is three players, including a top prospect. Friedman believes the Canucks are narrowing down the possible suitors to those willing to meet that price or at least willing to continue discussions about it. He doesn’t think that they’re close to a trade at this time.

Friedman didn’t name any clubs that could be among the interest parties for Horvat. However, he mentioned the Seattle Kraken and Minnesota Wild during his “32 Thoughts” podcast on Friday. He doesn’t believe the Canucks are allowing teams to speak with the pending unrestricted free-agent center.

SPECTOR’S NOTE: The Canucks could still surprise us as they did with J.T. Miller and re-sign Horvat but I think he’s a goner now. Based on recent comments by Canucks president of hockey ops Jim Rutherford, they aren’t comfortable paying Horvat for what they consider an outlier performance this season. It remains to be seen which team will meet their asking price before March 3 and whether the Canucks will allow them an opportunity to speak with Horvat about a contract extension.

Friedman also believes the Edmonton Oilers and Toronto Maple Leafs are among the teams to have inquired about Columbus Blue Jackets defenseman Vladislav Gavrikov. It’s believed the Jackets are allowing interested clubs to speak with him.

Marek thinks the Blue Jackets’ preference may have been to re-sign Gavrikov but he doesn’t believe that’s going to happen. He thinks they’ll seek a first and a third-round pick or a first-rounder plus other assets in return.

SPECTOR’S NOTE: Gavrikov isn’t the only defenseman the Leafs and Oilers are looking at in the trade market. Daily Faceoff’s Frank Seravalli reports they’re interested in Chicago Blackhawks defenseman Jake McCabe, who carries a seven-team no-trade list. The Los Angeles Kings are also thought to be among the suitors.

Seravalli believes McCabe’s no-trade list includes every Canadian team except for the Leafs. He’s carrying a $4 million annual cap hit through 2024-25 but Seravalli wondered if the Leafs could sway the Blackhawks into retaining half of it.

Speaking of teams being allowed to speak to players, Friedman thinks the San Jose Sharks will allow that to happen for restricted free-agent winger Timo Meier.

SPECTOR’S NOTE: Maybe the Winnipeg Jets could be among those teams talking to Meier. The Winnipeg Sun’s Scott Billeck believes the 26-year-old left winger could be a dream catch for Jets general manager Kevin Cheveldayoff.

Billeck believes Meier would be a perfect replacement for Blake Wheeler, who has one season remaining on his contract. The Sharks asking price and Meier’s $10 million qualifying price, however, are two significant hurdles.

← NHL Morning Coffee Headlines - January 22, 2023 NHL Morning Coffee Headlines - January 23, 2023 →
We use cookies on our website to give you the most relevant experience by remembering your preferences and repeat visits. By clicking “Accept”, you consent to the use of ALL the cookies.
Do not sell my personal information.
Cookie SettingsAccept
Manage consent