Sidney Crosby speaks about his future as well as his celebration of Nathan MacKinnon’s Stanley Cup win, Leafs GM Kyle Dubas faces a make-or-break season, the most and least expensive arenas to watch an NHL game, and more in today’s Morning Coffee Headlines.

YAHOO! SPORTS: Pittsburgh Penguins captain Sidney Crosby recently spoke about how long he intends to continue playing during a recent appearance on the “32 Thoughts” podcast.

“I’m thinking about three more years, then seeing what happens from there,” said the 34-year-old Crosby. That’s also when his current contract expires in 2025. He wants to ensure he can continue playing at a high level, with good health being among the factors that will determine how long he’ll continue his NHL career.

Crosby also opened up about celebrating with long-time friend and fellow Cole Harbour, NS native Nathan MacKinnon at the latter’s Stanley Cup party this summer. “At least top five (drunkest there)”, he joked, adding that MacKinnon left the party two hours before he did. “I think I shut the ale house down that night,” said Crosby.

SPECTOR’S NOTE: Crosby has a well-deserved reputation as one of the fittest players in the NHL. Now in his mid-thirties, he’s no longer the dominant player of his youth but remains among the league’s elite stars.

Despite missing the opening weeks of last season due to offseason wrist surgery, the Penguins captain tied with linemate Jake Guentzel as the club’s leading scorer with 84 points in 69 games. If Crosby is still capable of that type of production by 2025 it’s probably a safe bet that he’ll continue playing beyond that season.

THE ATHLETIC: Kyle Dubas will soon become the longest-serving general manager of the Toronto Maple Leafs in 25 years. However, it could also be his final season in the job if the Leafs once again fail to advance past the opening round of the Stanley Cup playoffs. His contract expires at the end of this season.

SPECTOR’S NOTE: As the article points out, the Leafs under Dubas have become one of the league’s best clubs during the regular season, twice setting franchise records for most points in a season (2017-18 and 2021-22). Nevertheless, the club’s ongoing postseason drought and Dubas’ reluctance to shake up his roster core have put him in what appears to be a difficult position with an uncertain future.

Dubas will probably earn a contract extension if the Leafs can at least get past the first round of the 2023 playoffs. Should they come up short again or miss the postseason, he won’t be back as GM.

TIME2PLAY: Rhiannon O’Donohue compiled a list of the most and least expensive arenas to watch an NHL game.

The New York Rangers top the list with the overall cost (factoring in ticket prices, food and drink and parking) being $188.26 USD or $247.99 Canadian based on 2021-22 numbers. The Toronto Maple Leafs and Vegas Golden Knights are second and third followed by the Seattle Kraken and Boston Bruins.

LE QUOTIDIEN: Antoine Roussel has been invited to the Philadelphia Flyers training camp on a professional tryout offer. The 32-year-old winger spent last season with the Arizona Coyotes.

NHL players will participate in the 2022 Winter Olympics, the Senators sign Drake Batherson, the Red Wings ink Filip Hronek to a new deal, and more in today’s morning coffee headlines.

NHL.COM: The league has reached an agreement with the International Ice Hockey Federation (IIHF) to take part in the 2022 Winter Olympics in Beijing. NHL players will be returning to the Olympics for the first time since the Sochi Games in 2014. The league will break from Feb. 3-22 to allow for the 2022 All-Star Game in Las Vegas followed by the Olympics. 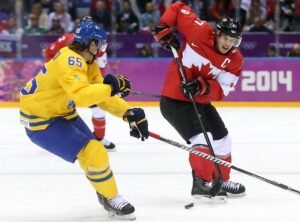 The agreement also provides the league and the NHL Players Association the option for a possible later decision to withdraw from the Beijing Games in the event COVID-19 conditions render participation to be impractical or unsafe.

SPECTOR’S NOTE: Some hockey fans and pundits believe the NHL should boycott the Beijing Games for a variety of reasons. That decision, however, isn’t up to the league.

The players wanted Olympic participation as part of the extension to the CBA. As a result, the league had to work with the PA, IIHF and the International Olympic Committee to reach an agreement on the Beijing Games. It appears the only thing that will prevent it will be the course of the COVID-19 pandemic.

SPECTOR’S NOTE: Batherson enjoyed a breakout campaign in 2020-21 after two short seasons with the Senators, tallying 17 goals and 34 points in 56 games. The report noted that the versatile two-way forward enjoyed terrific chemistry on a line with Brady Tkachuk and Josh Norris. That should continue in the coming years as the rebuilding Senators rise in the standings. Batherson’s new contract could also be a cost-effective deal if he continues to improve as management believes he will.

SPECTOR’S NOTE: An affordable new deal for Hronek, who developed into the Red Wings’ best blueliner over the past two seasons. He’ll likely be joined on their top pairing by Nick Leddy, who was acquired earlier this summer from the New York Islanders.

STLTODAY.COM: After signing an eight-year contract extension, Colton Parayko assured nervous Blues fans that he’s fully recovered from the back injury that hampered him last season. The 28-year-old defenseman missed 21 games but said he required minimal offseason treatment, relying instead on rest and building up the muscles around it.

TRIBLIVE.COM: The Pittsburgh Penguins invited forward Brian Boyle and defenseman Matt Bartkowski to training camp on professional tryout offers. Boyle is attempting a comeback after sitting out last season while Bartkowski spent all but one game last season with the Minnesota Wild’s AHL affiliate in Iowa.

NBC SPORTS BAY AREA: Rocky Thompson has stepped down as an associate coach with the San Jose Sharks. Medical reasons prevent him from taking the COVID-19 vaccine, making it difficult for him to perform his duties under the league’s COVID protocols for the coming season.