The New York Rangers fired team president John Davidson and general manager Jeff Gorton. Chris Drury has taken over for Davidson and Gorton but it’s uncertain if that’s on an interim basis. 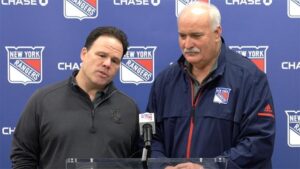 SPECTOR’S NOTE: Gorton had been general manager since July 2015 while Davidson became president in May 2019. Under those two, the Rangers had engaged in a rebuilding program, bringing in younger players.

Reports indicate this move is unrelated to the Rangers issuing a statement yesterday regarding the incident involving Washington Capitals winger Tom Wilson on Monday. Davidson and Gorton apparently sought to distance themselves from that statement.

The New York Post’s Larry Brooks cited sources saying a difference of opinion had emerged between those two and Rangers CEO James Dolan. Davidson and Gorton were taking a patient, long-term view while Dolan apparently wants the club to take the next step in the process. It’s also reported Dolan was unhappy with the Rangers’ performance this season, particularly after their two recent back-to-back shutout losses to the rival Islanders.

That “next step in the process” could mean Drury goes shopping in this summer’s trade and/or free-agent market. Perhaps veterans with a year remaining on their contracts, such as Mika Zibanejad or Ryan Strome, get peddled in the offseason. Maybe Drury attempts a blockbuster move by offering up some promising prospects and/or young players for a young impact star.

It’ll be interesting to see what the future holds for current Rangers coach David Quinn. While he kept his job there’s no certainty he’ll be back next season. Drury could prefer to bring in a more experienced NHL bench boss or could be directed by Dolan to do so.

THE ATHLETIC (subscription required): Pierre LeBrun reported New Jersey Devils general manager Ray Shero said there was never any consideration of moving left wing Taylor Hall at the trade deadline. Hall is a year away from eligibility for unrestricted free agency. Shero said he was asked about trading Hall by someone in the media two weeks before the deadline, adding there was “zero percent” chance of that happening. He also told LeBrun he hasn’t started contract negotiations yet with the Hall camp, suggesting those talks could start this summer. SPECTOR’S NOTE: Hall, winner of the 2018 Hart Trophy, would be among the biggest names in the 2020 UFA market. The reason his name popped up before the trade deadline was based on the assumption Shero might consider shopping him if he felt there was little chance of the winger re-signing with the Devils.

Once the initial frenzy of signings in this summer’s free-agent market has passed, we’ll likely hear growing speculation over Hall’s future in New Jersey. The longer he goes without a contract extension after this July, the more he’ll feature prominently in the rumor mill.

WILL RANGERS PURSUE PANARIN THIS SUMMER?

LeBrun also reported New York Rangers GM Jeff Gorton seeks a player who will help his club’s rebuild, rather than restrict it. He said he’s not going to promise any big signings to speed things up but admitted if such a player became available he’d look into it.

LeBrun believes someone like Columbus Blue Jackets winger Artemi Panarin would fit the bill, though he acknowledged Gorton will never say it. It’s believed the Rangers, Los Angeles Kings, New York Islanders, and Florida Panthers are among Panarin’s list of preferred destinations. At 27, Panarin is the right age to provide immediate help as well as over the long term.

SPECTOR’S NOTE: Panarin will be the best forward available in this summer’s UFA market and won’t lack for suitors. With over $61 million invested in 17 players, the Rangers have the cap space to make a competitive bid for the latest left winger. So do the Kings, Islanders, and Panthers. There could be quite a bidding war for his services leading up to July 1.