The Bruins’ David Krejci collects three points in his 1,000th NHL game, the three stars of the week are revealed and the Wild sign Matt Boldy to a contract extension. Details and much more in today’s NHL Morning Coffee Headlines.

NHL.COM: Boston Bruins center David Krejci celebrated his 1,000th career NHL game with a three-assist performance in a 6-0 drubbing of the Philadelphia Flyers. Jeremy Swayman had a 29-save shutout while David Pastrnak and Pavel Zacha each scored two goals as the league-leading Bruins (35-5-4) hold a 10-point lead over the Carolina Hurricanes in the overall standings with 72 points. The Flyers dropped to 18-19-7 on the season. 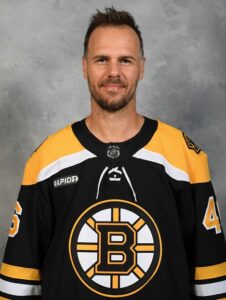 The New Jersey Devils picked up their seventh straight road win by downing the San Jose Sharks 4-3 on a shootout goal by Tomas Tatar. Jack Hughes scored with 10 seconds remaining to send the game into overtime and the shootout. With 61 points, the Devils (29-12-3) sit one point behind the Hurricanes in third place in the overall standings. James Reimer stopped 38 shots and Timo Meier had a goal and an assist for the Sharks as they fell to 13-23-9.

Dallas Stars goalie Jake Oettinger kicked out 27 shots to blank the Vegas Golden Knights 4-0. Jamie Benn scored what proved to be the game-winner as the Stars (26-12-7) move into a tie with the Winnipeg Jets with 59 points. The Jets hold first-overall in the Western Conference with a game in hand. With 58 points, the 28-15-2 Golden Knights slipped to third overall in the conference. They also lost defenseman Alec Martinez to an undisclosed injury.

The Colorado Avalanche got two goals and two assists from Nathan MacKinnon in a 6-3 win over the Detroit Red Wings. Cale Makar scored twice and collected an assist for the 22-17-3 Avalanche (47 points) as they moved to within four points of the Calgary Flames for the final Western Conference wild-card berth. The Red Wings’ record slipped to 18-17-7.

SPECTOR’S NOTE: The Avalanche also welcomed back winger Valeri Nichushkin after a nine-game absence with an ankle injury.

Speaking of the Flames, they dropped a 2-1 decision to the Nashville Predators. Juuse Saros stopped 38 shots, including 21 in the third period while Roman Josi and Juuso Parssinen scored for the Predators as they improved to 20-17-6 and sit five points back of the Flames, who slipped to 21-15-9 on the season.

Third-period goals by Nick Paul, Brandon Hagel and Victor Hedman lifted the Tampa Bay Lightning over the Seattle Kraken by a score of 4-1, snapping the latter’s eight-game winning streak. With 57 points, the Lightning (28-13-1) moved to within two points of the Toronto Maple Leafs for second place in the Atlantic Division. The Kraken (26-13-4) remain two points back of the first-place Golden Knights in the Pacific Division.

New York Rangers goalie Jaroslav Halak made 24 saves in a 3-1 win over the Columbus Blue Jackets. Barclay Goodrow and Kaapo Kakko each had two points as the Rangers improved to 25-13-7 to sit four back of the Devils in third place in the Metropolitan Division with 57 points. The Blue Jackets (13-28-2) have dropped four of their last five contests.

The Washington Capitals overcame a 3-0 deficit to down the New York Islanders 4-3 on an overtime goal by Dmitry Orlov. The Capitals (24-16-6) hold a four-point lead over the Pittsburgh Penguins for the first wild-card spot in the Eastern Conference with 54 points. The Islanders (23-18-4) are four points back of the Capitals with 50 points.

SPECTOR’S NOTE: The Islanders weren’t happy that Capitals captain Alex Ovechkin went unpenalized for what they considered an illegal hit to the head of forward Jean-Gabriel Pageau in the second period. Pageau left the game briefly but did return to action. Meanwhile, Capitals forward Nic Dowd left the game in the first period with an apparent leg injury and didn’t return.

Pittsburgh Penguins winger Jake Guentzel’s overtime goal lifted his club over the Anaheim Ducks 4-3. Guentzel, Evgeni Malkin and Jason Zucker each had a goal and an assist for the Penguins (22-15-6), who hold the final wild-card berth in the Eastern Conference (50 points) with two games in hand over the Islanders. Trevor Zegras and Troy Terry each had two goals for the 12-27-5 Ducks.

SPECTOR’S NOTE: Penguins defenseman Jan Rutta was a late scratch with an upper-body injury and is listed as day-to-day.

The St. Louis Blues collected their 2,000th franchise win by nipping the Ottawa Senators 2-1. Jake Neighbours and Noel Acciari scored for the Blues (22-20-3) as they also sit four points back of the Flames for the final Western wild-card spot. The Senators slipped to 19-21-3 and have dropped four of their last five games.

Florida Panthers winger Matthew Tkachuk collected three assists in a 4-1 win over the Buffalo Sabres. Sergei Bobrovsky made 28 saves for the Panthers (21-20-4) as they sit four points out of the final Eastern wild-card spot with 46 points. The Sabres dropped to 21-19-2 and have lost four of their last five games.

TWINCITIES.COM: The Minnesota Wild yesterday announced the signing of winger Matt Boldy to a seven-year, $49 million contract extension. The average annual value of the contract, which begins in 2023-24, is $7 million.

SPECTOR’S NOTE: Boldy, 21, is in the final season of his entry-level contract. He wasted little time establishing himself as a promising playmaking winger, netting 39 points in 47 games as a rookie in 2021-22 and 29 points in 42 games this season.

The Wild obviously believes big things are in store for Boldy. This deal could turn into a long-term bargain if he meets those expectations. It will also have a more immediate effect on the club’s salary-cap payroll for 2023-24, leaving them with $9.3 million in cap space.

SPECTOR’S NOTE: Frederik Andersen’s recent return from injury meant they have to demote Kochetkov, who remains waiver-exempt this season.

THE PROVINCE: Vancouver Canucks physician Dr. Bill Regan said there were two setbacks that stalled winger Tanner Pearson’s recovery from a hand injury that ended his season. He underwent two surgeries but the club didn’t reveal any details regarding the problems that arose during his rehabilitation due to patient privacy and confidentiality.

SPECTOR’S NOTE: Pearson’s situation raised questions and some criticism over the club’s handling of his treatment. The NHLPA is reportedly looking into the matter.

OTTAWA SUN: Potential owners of the Senators could have their first opportunity to review the club’s finances as early as Tuesday.

The Hurricanes extended their win streak, Erik Karlsson sets a Sharks record and the Stars re-sign Joe Pavelski. Details and much more in the NHL Morning Coffee Headlines.

NHL.COM: The Carolina Hurricanes picked up their 11th straight win by defeating the New Jersey Devils 5-4 on a shootout goal by Andrei Svechnikov. Derek Stepan tallied twice in regulation for the Hurricanes (25-6-6) as they also extended their points streak to 17 games. Jesper Bratt scored twice and collected an assist for the Devils as they dropped to 23-11-3.

San Jose Sharks defenseman Erik Karlsson collected two assists in a 5-2 win over the Chicago Blackhawks, extending his points streak to a franchise-record 13 games. Blueliner Marc-Edouard Vlasic scored in what was his 1,200th career game all spent with the Sharks. Patrick Kane and Sam Lafferty scored for the Blackhawks (8-24-4) as they’ve lost 12 of their last 13 contests. The Sharks improved to 12-20-7.

SPECTOR’S NOTE: Karlsson remains the leading scorer among NHL defensemen by a wide margin. With 53 points, he’s 11 ahead of the Winnipeg Jets’ Josh Morrissey and sits fifth among all NHL skaters this season.

The New York Rangers got two goals from Mika Zibanejad to defeat the Florida Panthers by a score of 5-3. Jaroslav Halak turned aside 32 shots as the Rangers improved to 20-12-6. Eric Staal had two points for the Panthers (16-18-4), who’ve lost five of their last six games.

Seattle Kraken goaltender Martin Jones made 18 saves in a 4-1 victory over the New York Islanders. Yanni Gourde and Vince Dunn each collected two points as the Kraken improved to 19-12-4. Ilya Sorokin stopped 31 shots while Mathew Barzal tallied his 100th career goal for the 21-15-2 Islanders.

The Ottawa Senators beat the Buffalo Sabres 3-1, snapping the latter’s six-game win streak. Anton Forsberg picked up the win with a 33-save performance, Tim Stutzle scored twice and Jacob Lucchini’s first NHL goal turned out to be the game-winner for the Senators (17-17-3) while the Sabres dropped to 18-15-2.

THE DALLAS MORNING NEWS: The Stars and Joe Pavelski agreed to a one-year, $5.5 million contract extension for 2023-24. Pavelski, 38, will earn a base salary of $3.5 million with an additional $2 million in performance bonuses. The deal also includes a no-movement clause

SPECTOR’S NOTE: Pavelski’s new contract is similar to his current deal. The only difference is how the dollars are divided up. It’s a reasonable contract for both sides given his age. Pavelski is currently second among the Stars in assists with 25 and third in points with 37 in 38 games.

The Edmonton Oilers will host the Calgary Flames in the 2023 Tim Hortons NHL Heritage Classic at Commonwealth Stadium on Oct. 29. It will mark the 20th anniversary of the first NHL outdoor regular-season game in which the Oilers fell to the Montreal Canadiens 4-3 in front of over 56,000 fans in the first Heritage Classic.

SPECTOR’S NOTE: It’s hard to believe it’s been 20 years since the first Heritage Classic. That game laid the foundation for the annual Winter Classic and a host of outdoor regular-season games.

BOSTON HERALD’s Steve Conroy took to Twitter yesterday debunking a radio report out of Boston on New Year’s Eve claiming the Bruins had re-signed winger David Pastrnak. He cited Pastrnak’s agent J.P. Barry calling the report “rubbish”, adding that negotiations are ongoing but it’s difficult to say whether progress has been made or not.

SPECTOR’S NOTE: The report claimed the Bruins and Pastrnak were finalizing an eight-year deal worth $88 million. That’s an average annual value of $11 million, which is pretty much what the 27-year-old pending free-agent winger is expected to receive from the Bruins or on the open market by July 1.

CBS SPORTS: The Vegas Golden Knights placed defenseman Alec Martinez on injured reserve. He’s been sidelined for the past two games with an undisclosed injury.

← Sunday NHL Rumor Roundup - January 1, 2023 NHL Rumor Mill - January 2, 2023 →
We use cookies on our website to give you the most relevant experience by remembering your preferences and repeat visits. By clicking “Accept”, you consent to the use of ALL the cookies.
Do not sell my personal information.
Cookie SettingsAccept
Manage consent