The Hurricanes and Islanders move into first place in their respective divisions, Viktor Arvidsson tallies a hat trick for the surging Predators, Alex Ovechkin reaches another scoring milestone, the Blackhawks and Panthers swing a five-player deal, the Canucks re-sign Tanner Pearson, and more in today’s NHL morning coffee headlines.

NHL.COM: The Carolina Hurricanes took over first place in the Discover Central Division by blanking the Florida Panthers 3-0. Alex Nedeljkovic had a 24-save shutout performance, Sebastian Aho collected his 300th career point and Vincent Trocheck and Martin Necas each had a goal and an assist. The Hurricanes (57 points) sit one point up on the Panthers and Tampa Bay Lightning.

A four-goal first period powered the Lighting to a 6-4 victory over the Columbus Blue Jackets. Ryan McDonagh scored twice and Yanni Gourde collected four assists for the Lightning, who lost captain Steven Stamkos in the third period with an undisclosed injury. No update was provided on his condition. The Jackets made defenseman David Savard a healthy scratch as a precautionary measure ahead of Monday’s trade deadline. The Lightning and Panthers are tied with 56 points but the Lightning hold second place in the Central with a game in hand.

SPECTOR’S NOTE: Savard sits atop TSN’s Trade Bait list. This move means the blueliner could be playing elsewhere by Monday’s 3 pm ET deadline. Jackets captain Nick Foligno is also on TSN’s list but he played in this game, which suggests he could be finishing the season with the Jackets barring a significant trade offer before Monday. 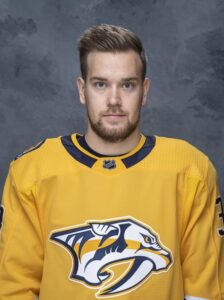 Viktor Arvidsson tallied a hat trick as the Nashville Predators crushed the Detroit Red Wings 7-1. The Predators (45 points) have won nine of their 10 games and hold a four-point lead over the Chicago Blackhawks for fourth place in the Central.

Meanwhile, Chicago fell to the Dallas Stars 5-1 as Roope Hintz had a goal and three assists. The Stars sit three points back of the Blackhawks.

The New York Islanders took over first place in the MassMutual East Division by edging the Philadelphia Flyers 3-2 on a shootout goal by Brock Nelson. Kyle Palmieri and Travis Zajac were held scoreless in their first game with the Isles since being acquired from the New Jersey Devils on Wednesday. With 56 points, the Islanders are two points ahead of the second-place Washington Capitals.

Speaking of the Capitals, they dropped a 4-2 decision to the Boston Bruins. Brad Marchand and Craig Smith each had a goal and an assist while rookie goalie Jeremy Swayman kicked out 31 shots for his second straight win. Capitals captain Alex Ovechkin tallied his 266th career power-play goal to move into second place on the all-time list. The Bruins (48 points) opened a six-point lead over the Flyers for fourth place in the East Division.

Kris Letang and Jason Zucker each had a goal and an assist as the Pittsburgh Penguins romped to a 5-2 win over the New York Rangers. The Penguins (52 points) moved to within two points of the second-place Capitals.

Third-period goals by Devin Shore and Jesse Puljujarvi gave the Edmonton Oilers a 3-1 victory over the Ottawa Senators. Mike Smith turned aside 39 shots for the win as the Oilers (52 points) hold a one-point lead over the Winnipeg Jets for second place in the Scotia North Division. Oilers center Ryan Nugent-Hopkins missed the game with an undisclosed injury.

Winnipeg, meanwhile, doubled up the Montreal Canadiens 4-2. Jets goalie Connor Hellebuyck made 38 stops and Kyle Connor collected two assists. With 43 points, the fourth-place Canadiens are eight back of the third-place Jets.

Two power-play goals by Pavel Zacha carried the New Jersey Devils over the Buffalo Sabres 6-3. Jack Hughes and Yegor Sharangovich each had a goal and two assists.

SPECTOR’S NOTE: This move is in line with Blackhawks general manager Stan Bowman’s stated willingness to use his cap space to absorb a bad contract if the return comes with a promising young player. Connolly’s contract isn’t onerous for the Hawks ($3.5 million annual average value through 2022-23) but it was for the Panthers as the veteran winger fell out of favor in Florida.

The prize for the Blackhawks is Borgstrom, a promising young forward who struggled to crack the Panthers’ lineup. He could have a better chance to establish himself as an NHL regular with the retooling Blackhawks as they transition toward younger players.

TSN: Canadiens goaltender Carey Price is unavailable until next week because of a lower-body injury.

BOSTON HOCKEY NOW: Bruins defenseman Charlie McAvoy is recovering from an upper-body injury. However, he’s expected to miss the club’s next two games.

THE PROVINCE: The Vancouver Canucks signed winger Tanner Pearson to a three-year contract extension worth an annual average value of $3.25 million.

SPECTOR’S NOTE: This signing received mixed reviews among pundits and fans on social media. It’s not because Pearson’s a bad player or that the contract is an overpayment. He’s become a dressing room leader and a good second-line winger.

Critics, however, point to other depth signings by Canucks GM Jim Benning (Sven Baertschi, Sam Gagner, Jay Beagle, Antoine Roussel, Jake Virtanen) as cap dollars poorly invested when young stars like Elias Pettersson and Quinn Hughes will soon be in need of significant raises. They fear the Pearson signing will further squeeze the Canucks cap space, leaving little room for other moves once Pettersson and Hughes receive their new contracts.

NHL.COM: Colorado Avalanche defenseman Jacob MacDonald received a two-game suspension by the department of player safety for an illegal check to the head of Minnesota Wild forward Ryan Hartman on Wednesday.

← NHL Trade Deadline: Don't Anticipate An Outbreak Of Deals NHL Rumor Mill - April 9, 2021 →
We use cookies on our website to give you the most relevant experience by remembering your preferences and repeat visits. By clicking “Accept”, you consent to the use of ALL the cookies.
Do not sell my personal information.
Cookie SettingsAccept
Manage consent