Patrik Laine is happy he’s staying with the Blue Jackets while the Canadiens’ Paul Byron assists in a plane crash rescue. Details and more in today’s NHL morning coffee headlines.

THE COLUMBUS DISPATCH: Patrik Laine is happy to have a new contract with the Blue Jackets and excited about the club’s recent signing of winger Johnny Gaudreau. 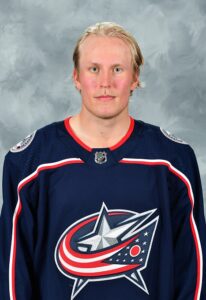 Laine learned of the Gaudreau signing while negotiations were ongoing for his own contract. “I don’t think I’ve ever been this excited to play hockey and maybe be able to play with this kind of guy,” he said.

Regarding his own new contract, Laine said he enjoys playing in Columbus and is happy he’s staying put. “Personally, I don’t know why guys, big names, have left before,” he said. “For me, that was never in my head that I wanted to go somewhere else.” Laine went on to say Columbus feels like home and there was no place he’d rather play in the NHL.

SPECTOR’S NOTE: Laine’s new four-year contract and Gaudreau’s seven-year deal with the Blue Jackets is changing the impression of Columbus as a city that NHL stars prefer to avoid or leave at the first opportunity. It could become a prime destination for future stars if Gaudreau and Laine can help to turn the Blue Jackets into a contender.

SPORTSNET: Montreal Canadiens forward Paul Byron was part of a group of people who rescued the pilot of a seaplane that crashed in Lac des Sables in the Laurentians on Sunday.

Byron downplayed his role, crediting Serge Labelle with rescuing the pilot, who was the only person on the plane. He also praised his father-in-law, brother-in-law and a friend who also assisted in the rescue.

TSN: The Seattle Kraken avoided salary arbitration with forward Morgan Geekie, signing him to a one-year, $1.4 million contract. Geekie, 24, had seven goals and 22 points in 73 games with the Kraken last season. He’s among the group of players selected by the Kraken in last summer’s expansion draft.

CBS SPORTS: Speaking of the Kraken, they signed Michal Kempny to a one-year, $750 contract. The 31-year-old defenseman spent over three seasons with the Washington Capitals, helping them win the Stanley Cup in 2018.

SPECTOR’S NOTE: Eriksson’s NHL career appears to be over after 16 seasons. His most productive campaigns were with the Dallas Stars with three straight 70-plus point seasons from 2009-10 to 2011-12. He also had a 63-point season with the Boston Bruins in 2015-16.

← Sunday NHL Rumor Roundup - July 24, 2022 NHL Rumor Mill - July 25, 2022 →
We use cookies on our website to give you the most relevant experience by remembering your preferences and repeat visits. By clicking “Accept”, you consent to the use of ALL the cookies.
Do not sell my personal information.
Cookie SettingsAccept
Manage consent