The COVID-19 pandemic took a toll on NHL revenue over the last two seasons. Shortened seasons saw revenues plummet from a high of $5.09 billion in 2018-19 to $4.37 billion the following season. On May 13, 2021, The Athletic’s Sean Shapiro reported the league missed out on roughly $3.6 billion in revenue in 2020-21 due to lowered attendance. 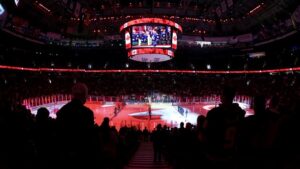 Prior to the start of the 2021-22 season, NHL commissioner Gary Bettman was optimistic about the league generating $5 billion in revenue barring any interruptions by COVID-19. Earlier in the year, the league signed two new lucrative long-term broadcasting contracts with ESPN and Turner Sports. Teams were able to sell jersey ad patches for the first time plus the league was tapping into other revenue streams such as sports betting and endorsements.

One month into the 2021-22 schedule, however, attendance is down around the league compared to where it was before the pandemic.

On Oct. 25, Sean Shapiro reported average attendance prior to the COVID shutdown in 2019-20 was 17,423. Through the first 75 games of this season, it had dropped to 16, 256. He also indicated several teams, including the Chicago Blackhawks, Nashville Predators and Pittsburgh Penguins, saw years of sellout streaks come to an end.

Several factors besides the pandemic are partially to blame in some cases. The Chicago Blackhawks, for example, are struggling on the ice while the franchise has been rocked by a sexual assault scandal from 2010. Some, like the Ottawa Senators, can tie their drop in attendance to their efforts in rebuilding their rosters.

The pandemic, meanwhile, still hovers over all aspects of life. Some fans still might not feel safe enough to return to games despite the health and safety measures while others could be put off by those rules.

A worrisome factor could be the cost of attending NHL games becoming too expensive for fans feeling the economic effects of the pandemic. Inflation could push the already expensive cost of attending an NHL game out of reach for the average fan. Some season-ticket or long-term ticket package holders could instead choose from more affordable single game or shorter-term options.

That doesn’t mean the NHL still won’t see a significant increase in hockey-related revenue (HRR) compared to last season. It could reach the $5 billion mark as projected by Bettman.

However, the NHL exceeded $5 billion in 2019-20 under the previous broadcasting deals and revenue streams, and without its new franchise in Seattle. Reaching roughly the same number this season won’t be the kind of improvement the league would prefer under normal circumstances.

Big-market clubs should be able to ride things out until HRR improves. Smaller markets, however, will fill the pinch.

Under the 2020 CBA extension, escrow payments were capped at 10 percent for 2022-23 and six percent for each of the remaining three years of the extension. That was based on the expectation that attendance would return to normal by that point, with the players having already made expensive escrow payments last season and this season to help the owners offset their losses.

The Athletic’s Sean Shapiro pointed out the players still owe the owners nearly $1 billion. The next round of CBA talks could become contentious if revenue hasn’t significantly risen by 2025-26 to enable the players to pay off that debt.

Of course, it’s still early in this season. Attendance could rebound if the North American economy improves as the pandemic subsides and life regains a semblance of normal.

But what happens if that’s not the case? What if those attendance figures are sluggish to return to what they once were? What if there’s yet another wave of COVID-19 that leads to rescheduled games or another shortened schedule? What happens to the players’ debt to the owners?

The fallout from the effects of the pandemic upon NHL revenue could linger for years. That could raise the specter of yet another work stoppage when the collective bargaining agreement expires in 2026.

← Sunday NHL Rumor Roundup - November 14, 2021 NHL Morning Coffee Headlines - November 15, 2021 →
We use cookies on our website to give you the most relevant experience by remembering your preferences and repeat visits. By clicking “Accept”, you consent to the use of ALL the cookies.
Do not sell my personal information.
Cookie SettingsAccept
Manage consent