​Mason Marchment has a 6-point night in a big Panthers win, more changes to NHL COVID protocols, the 3 stars of the week revealed, the wild re-sign Jordan Greenway and more in today’s NHL morning coffee headlines.

NHL.COM: Florida Panthers winger Mason Marchment scored two goals and set up four others in a six-point performance as his club doubled up the Columbus Blue Jackets 8-4. Teammates Anton Lundell collected five assists while Sam Reinhart tallied a hat trick and chipped in an assist. Patrik Laine scored twice for the Jackets while Elvis Merzlikins was pulled after giving up seven goals on 25 shots. The Panthers regained first place in the overall standings with 69 points. 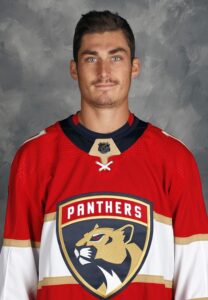 SPECTOR’S NOTE: The Jackets received bad news yesterday as defenseman Jake Bean is expected to be sidelined for four weeks with a groin injury. Bean already tallied career highs with four goals and 15 points this season.

Auston Matthews netted a hat trick during the Toronto Maple Leafs 6-4 comeback win over the New Jersey Devils. The Leafs overcame a 4-2 deficit with four unanswered third-period goals. Mitch Marner extended his goal streak to six games with a goal and two assists while Leafs goalie Jack Campbell was pulled after giving up three goals on nine shots. They remain in third place in the Atlantic Division with 59 points.

SPECTOR’S NOTE: Leafs defenseman Jake Muzzin missed this game with a concussion and is expected to remain sidelined for the remainder of this week. Devils coach Lindy Ruff missed this game and will miss the rematch tonight due to the recent passing of his father. My condolences to Ruff and his family.

An overtime goal by Tim Stutzle lifted the Ottawa Senators over the Edmonton Oilers 3-2. Goaltender Matt Murray picked up the win with a 37-save performance while Brady Tkachuk and Thomas Chabot each had two points. The Oilers (47 points) sit one point behind the Calgary Flames in the final wild-card spot in the Western Conference.

Vancouver Canucks goaltender Jaroslav Halak made 20 saves for his first win since Dec. 30 in a 3-1 victory over the Chicago Blackhawks. Brock Boeser tallied his 12th goal of the season as the Canucks (46 points) sit two points back of the Flames.

The Detroit Red Wings nipped the Anaheim Ducks 2-1. Jordan Oesterle scored in overtime while Dylan Larkin netted his 23rd of the season. Rickard Rakell replied for the Ducks, who sit in second place in the Pacific Division with 55 points.

NHL.COM: The league and the NHL Players Association yesterday announced an update on their COVID-19 protocols. Among the notable changes is the removal of “enhanced measures” as they revert back to start-of-season protocols, removal of daily testing for fully-vaccinated individuals, removal of the requirement to test close contacts, and updated recommendations for the type of masks and steps to reduce community exposure.

DAILY FACEOFF: The skills competition for the upcoming 2022 NHL All-Star weekend in Las Vegas will feature events on the Las Vegas Strip and in the Belaggio Fountains.

SPECTOR’S NOTE: It’s a nice little pay bump for Greenway from the $2.1 million annual average value of his current deal. This also fits comfortably within the Wild’s salary-cap payroll for 2022-23. Cap Friendly indicates the Wild have $69.4 million invested in 13 players next season with Kevin Fiala, Alex Goligoski, and Kaapo Kahkonen among their notable free agents.

NBC SPORTS CHICAGO: Former Blackhawks Marian Hossa, Ed Olcyzk and Patrick Sharp will be part of the advisory committee that will select the club’s next general manager.

TORONTO SUN: Former Maple Leafs head coach Mike Nykoluk passed away at age 87. He spent 17 seasons as a player in the AHL but briefly played for the Leafs in 1956-57. He was their head coach from 1980 to 1984. As an assistant coach with the Philadelphia Flyers, he was part of their Stanley Cup championships in 1974 and 1975. He was also an assistant coach with the New York Rangers before joining the Leafs.

SPECTOR’S NOTE: My condolences to Nykoluk’s family, friends and to the Leafs, Flyers and Rangers organizations.

← NHL Rumor Mill - January 31, 2022 NHL Rumor Mill - February 1, 2022 →
We use cookies on our website to give you the most relevant experience by remembering your preferences and repeat visits. By clicking “Accept”, you consent to the use of ALL the cookies.
Do not sell my personal information.
Cookie SettingsAccept
Manage consent