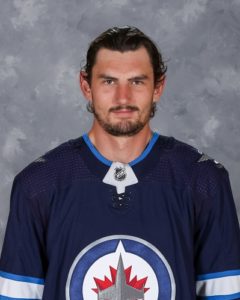 Winnipeg Jets goaltender Connor Hellebuyck is among the finalists for the 2020 Vezina Trophy (Photo via NHL Images).

SPECTOR’S NOTE: Rask (2014) and Vasilevskiy (2019) won the Vezina before, while this is Hellebuyck’s second time as a finalist. Rask has the better stats of the three, but Hellebucyk led the league in shutouts (6) while carrying the Jets and their depth-depleted defense into the 2020 playoffs. That could be the determining factor in his favor.

NBC SPORTS BOSTON: David Pastrnak’s agent said his client is in quarantine after coming in contact with an individual who tested positive for COVID-19. The Bruins winger tested negative for the coronavirus. That explains why he was held out of practice Thursday.

EDMONTON JOURNAL: Oilers defenseman Caleb Jones admitted he tested positive for COVID-19 several weeks ago when he returned to Edmonton from his off-season home in Dallas. He had no symptoms and self-quarantined for two weeks. He’s fine now and skating in Oilers’ practices.

SPECTOR’S NOTE: Jones is the second player known to have had the virus but the first to voluntarily admit it. Last month, the Toronto Sun reported Maple Leafs center Austin Matthews tested positive for COVID-19 over a month ago. He acknowledged it earlier this week.

The NHL is preventing teams from revealing the health status of its players during the return-to-play plan. Absent players are being listed as “unfit to play” or “unfit to participate” with no explanation.

Speaking of the Oilers, they and the mayor of Edmonton issued statements yesterday insisting the storm damage caused to part of Rogers Place arena on Thursday won’t derail plans to host Western Conference teams in the upcoming playoff tournament.

NHL.COM: Marc-Andre Fleury participated in training camp on Friday with his Vegas Golden Knights teammates for the first time this week. The club claims Fleury missed the opening days for “maintenance”, while head coach Peter DeBoer said the goaltender’s absence was not related to COVID-19.

TAMPA BAY TIMES: Lightning forward Cedric Paquette was listed as “unable to practice” on Friday. He was banged-up during practice on Wednesday.

MONTREAL GAZETTE: Noah Juulsen is battling for a spot on the Canadiens roster after being sidelined since Nov. 19, 2018, with migraines related to head trauma. The 23-year-old defenseman got in some games with the Habs’ AHL farm team in Laval before the schedule was interrupted in March and claims he’s felt great since then.

SPECTOR’S NOTE: For a while, there was concern Juulsen’s promising career could be over before it began. If he’s healthy he could be a valuable addition to the Canadiens blueline.

SPECTOR’S NOTE: Maybe Wilson doesn’t like it when a reporter spoils his big reveal.

THE DENVER POST: Some promising news to report on former NHLer Kyle Quincey’s young son Axl. The 1-year-old appears on the road to recovery following his second brain surgery on June 9 to remove a tumor.

SPECTOR’S NOTE: Best wishes to Axl and his family. Here’s hoping he makes a full recovery.

← NHL Rumor Mill - July 17, 2020 NHL Rumor Mill - July 18, 2020 →
We use cookies on our website to give you the most relevant experience by remembering your preferences and repeat visits. By clicking “Accept”, you consent to the use of ALL the cookies.
Do not sell my personal information.
Cookie SettingsAccept
Manage consent