NHL.COM: The New York Islanders’ Zdeno Chara surpassed Chris Chelios for most games (1,652) by an NHL defenseman but his club dropped a 4-3 shootout decision to the San Jose Sharks. Isles winger Zach Parise also reached a personal milestone by tallying his 400th career NHL regular-season goal. Logan Couture netted the winning goal for the Sharks (52 points), who sit seven points behind the Edmonton Oilers for the final wild-card berth in the Western Conference. 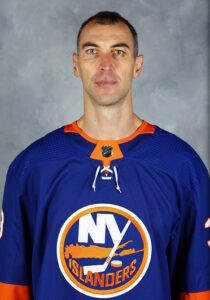 SPECTOR’S NOTE: Congratulations to Chara and Parise on their respective achievements in what could be their final NHL seasons. Both are now well past their playing prime and could face retirement following this season.

A shootout goal by Mikael Granlund gave the Nashville Predators a 2-1 victory over the Dallas Stars after they honored former goaltender Pekka Rinne by retiring his jersey No. 35 in a pre-game ceremony. Rinne’s successor, Juuse Saros, made 27 saves for the win as the Predators opened a six-point lead over the Oilers in the first Western wild-card berth with 64 points. The Stars (59 points) sit just behind the Oilers.

J.T. Miller scored twice and added two assists while Thatcher Demko made 29 saves as the Vancouver Canucks thumped the Calgary Flames 7-1, snapping the latter’s 10-game win streak. Elias Pettersson and Bo Horvat each tallied two goals as the Canucks (56 points) moved within three points of the Oilers. The Flames remain atop the Pacific Division with 66 points.

Toronto Maple Leafs center Auston Matthews scored twice to take over the NHL goal-scoring lead (36) in a 3-1 victory over the Minnesota Wild to snap a three-game losing skid. Petr Mrazek kicked out 29 shots while Mitch Marner collected two assists. With 70 points, the Leafs sit two points behind the second-place Tampa Bay Lightning in the Atlantic Division. The Wild remain in third place in the Central with 65 points, one behind the St. Louis Blues. Leafs winger Ilya Mikheyev left the game early with a non-COVID-related illness.

The Boston Bruins got a two-goal performance by Jake DeBrusk, including the winning goal in overtime, to down the Seattle Kraken 3-2. Charlie McAvoy collected two assists while Linus Ullmark stopped 25 shots. Bruins winger Brad Marchand was held scoreless in his return from a six-game suspension. The Bruins hold the final Eastern Conference playoff spot with 64 points, one behind the Washington Capitals. The Kraken has dropped six straight games.

Speaking of the Capitals, they suffered a 4-1 defeat at the hands of the New York Rangers. Igor Shesterkin turned aside 36 shots for the Rangers while teammates Mika Zibanejad and Alexis Lafreniere each had a goal and an assist. Capitals captain Alex Ovechkin netted his 32nd goal of the season. The Rangers sit in second place in the Metropolitan Division with 71 points, three behind the division-leading Carolina Hurricanes.

Patrik Laine scored a goal to extend his points streak to 11 games as his Columbus Blue Jackets upset the Florida Panthers 6-3. Oliver Bjorkstrand, Jakub Voracek and Jack Roslovic each collected two points for the Jackets while J-F Berube made 39 saves for the win. The Jackets have won four straight games and sit nine points behind the Bruins. The Panthers remain atop the Eastern Conference with 75 points.

Speaking of upsets, the New Jersey Devils rolled to a 6-1 victory over the Pittsburgh Penguins. Jesper Bratt, Nico Hischier and Jack Hughes each collected three points while Nico Daws turned in a 37-save performance for the Devils. The Penguins sit one point behind the Rangers in the Metro Division.

NEWSOBSERVER.COM: Carolina Hurricanes defenseman Tony DeAngelo will be sidelined for at least a month with an upper-body injury. It appears he injured his midsection during a game against the Philadelphia Flyers on Monday.

SPECTOR’S NOTE: DeAngelo was enjoying a solid bounce-back performance with the Hurricanes. Skating for much of the season alongside Jaccob Slavin, he’s third among Hurricanes scorers with 40 points.

THE ATHLETIC: Daniel Kaplan reports Evander Kane described his professional prospects beyond this season as “uncertain” and his pending contract grievance with the San Jose Sharks as “unclear” in a recent court filing in his ongoing bankruptcy case.

SPECTOR’S NOTE: The NHL Players Association reportedly filed a grievance on Kane’s behalf three weeks ago over the Sharks terminating his contract. A date for a hearing has yet to be determined.

NHL.COM: Toronto Maple Leafs winger Michael Bunting was fined $2,000.00 by the department of player safety for diving/embellishment during a recent game against the Pittsburgh Penguins.