TRIBLIVE.COM: Jake Guentzel was among a group of Pittsburgh Penguins to hit the ice on Tuesday. It’s a significant step forward for the 25-year-old winger after being sidelined since January by shoulder surgery. Guentzel hopes to be ready to participate in this summer’s proposed 24-team NHL playoff tournament. 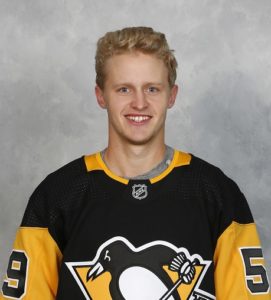 SPECTOR’S NOTE: Guentzel was on pace for a career-best performance before the shoulder injury. His return will provide the Penguins with a welcome boost to their offensive game.

SPECTOR’S NOTE: The seven NHL teams that didn’t qualify for the tournament can make their training facilities available upon request for their own players and those from other clubs who reside in their cities.

NEWSDAY: Johnny Boychuk said his injured left eye has almost fully recovered and he will be on the ice today for small-group training. The New York Islanders defenseman needed 90 stitches and plastic surgery after being struck by a skate blade during a March 3 game against the Carolina Hurricanes.

NBC SPORTS BOSTON: Brad Marchand and Patrice Bergeron are among the Bruins participating in voluntary small-group training under Phase 2 of the NHL’s return-to-play plan.

SUN-SENTINEL.COM: Florida Panthers general manager Dale Tallon said two-thirds of his players are already in the South Florida area and more are trickling in every day. The Panthers began their Phase 2 training yesterday.

VANCOUVER SUN: British Columbia Premier John Horgan endorsed a plan supplied by the Vancouver Canucks which would allow Vancouver to be one of the two host cities for the playoff tournament. He has written Canadian Prime Minister Justin Trudeau informing him of the province’s support.

The plan would allow teams to stay in local Vancouver hotels isolated from the general public. It would also allow players’ families to join them provided they remain within that isolation bubble.

SPECTOR’S NOTE: Canada and the United States have reportedly agreed to extend their border ban on non-essential travel to late July. While the US has deemed NHL players and staff as essential workers, Canada has yet to follow suit. If it doesn’t, the two host cities will be in the United States.

EDMONTON JOURNAL: The Edmonton Oilers, Calgary Flames, and Vancouver Canucks are considering holding their Phase 3 training camps in the United States if the two host cities for Phase 4 are located south of the Canadian border.

SPECTOR’S NOTE: The Toronto Maple Leafs, Montreal Canadiens, and Winnipeg Jets could do the same. No sense having their players go through two weeks of self-quarantine in Canada before training camp if they’re to travel to the United States afterward for the tournament.

SPECTOR’S NOTE: Some Canadiens fans will despair about this news, pointing to the Habs’ woeful record over the past four years. Others will commend Molson for his patience in the club’s “retooling” program.

THE SCORE: Columbus Blue Jackets coach John Tortorella has changed his view about those who choose to kneel during the playing of the national anthem. He once threatened to bench any player who took a knee or remained seated. “I have learned over the years, listening and watching, that men and women who choose to kneel during this time mean no disrespect to the flag,” said Tortorella.

SPECTOR’S NOTE: Perhaps it’s time to stop playing the national anthems before NHL games and instead reserve them solely for international tournaments. Thoughts?

THE HOCKEY NEWS: Arizona Coyotes owner Alex Meruelo doesn’t expect his club will face a substantial penalty for its alleged player recruitment violations. The Coyotes are under investigation for holding illegal pre-draft fitness tests of several players in the Canadian Hockey League (CHL).

Speaking of the CHL, Rimouski Oceanic winger Alexis Lafreniere was named the league’s Player of the Year for the second consecutive season. Pittsburgh Penguins center (and Oceanic alumni) Sidney Crosby is the only other CHL player to win that honor back-to-back. Lafreniere is considered the top prospect in the 2020 NHL Draft.

THE ATHLETIC: Former NHL player Kyle Quincey’s 14-month-old son Axl underwent surgery yesterday in Philadelphia on an Ependymoma tumor discovered in late March when he was diagnosed with brain cancer. They will be in Philadelphia for two months as Axl finishes his treatment protocols.

← NHL Return-to-Play Plan: Could Changes to This Season's Schedule Become Permanent? NHL Rumor Mill - June 11, 2020 →
We use cookies on our website to give you the most relevant experience by remembering your preferences and repeat visits. By clicking “Accept”, you consent to the use of ALL the cookies.
Do not sell my personal information.
Cookie SettingsAccept
Manage consent