FREE-AGENT FORWARD TARGETS FOR THE DEVILS 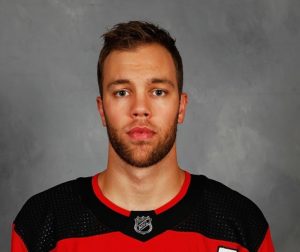 Could the New Jersey Devils attempt to bring back Taylor Hall? (Photo via NHL Images)

He doubted Hall might return to the Devils if he doesn’t find a suitable contract in the UFA market but doesn’t completely rule it out. I believe we’ve seen the last of Hall in a Devils’ jersey. He probably wants to play with a contender, which rules out his former team.

I share Masisak’s view that the lack of impact UFA forwards in this year’s market could put Hoffman and Dadonov out of the Devils’ price range. Toffoli will also probably be too expensive. Namestnikov and Granlund could be more affordable, but their inconsistent play in recent years probably won’t make them a good fit for the Devils.

SPECTOR’S NOTE: Smith and Fast seem like the best of this bunch. They would bring experienced, affordable depth to the Devils’ forward lines but not enough to move the needle forward.

SPECTOR’S NOTE: These guys are in the twilight years of their respective careers. Kovalchuk could return to the Montreal Canadiens, the Toronto Maple Leafs could re-sign Spezza, and Marleau could return to San Jose if there’s a spot available with the Sharks. Like the bargain options, there’s no one in this group who could significantly advance the Devils’ rebuild.

CHICAGO TRIBUNE: Paul Thompson reports the Blackhawks still have pivotal roster decisions to make following the 24-team playoff tournament. Here’s a look at several of the notable ones.

Long-time starting goalie Corey Crawford is an unrestricted free agent at season’s end. If he re-signs it likely won’t be for the $6 million annually of his current contract. His age (35) and recent concussion history are cause for concern.

SPECTOR’S NOTE: The Hawks might not have much choice. They sent Robin Lehner to Vegas at the trade deadline. Malcolm Subban, part of the return in that deal, is not an NHL starter. Washington’s Braden Holtby could be available but he’ll probably be too expensive for the Hawks.

Winger Brandon Saad is eligible next summer for UFA status and carrying a $6 million cap hit for 2020-21. He was a frequent subject of trade chatter this season and could surface again in the rumor mill. However, Thompson suggests the Hawks could keep him if they decide to build on the current roster.

SPECTOR’S NOTE: With over $75 million invested in 19 players for next season and Crawford, Dylan Strome, Dominik Kubalik, and Drake Caggiula due for new contracts, the Blackhawks must shed salary to accommodate those deals. They could get some cap relief if Brent Seabrook goes on long-term injury reserve next season. Nevertheless, they might still have to move out Saad to clear more space.

Winger Andrew Shaw was frequently sidelined over the past three seasons. Given his injury history, he might be a luxury they can no longer afford. Shaw has three years left on his contract with an annual average value of $3.9 million.

SPECTOR’S NOTE: Shaw could also end up on LTIR to start next season. If his concussions are serious enough, he could be there permanently.

Defenseman Olli Maatta is likely a trade or buyout candidate. He’s got two years left on his contract worth over $4.08 million AAV.

SPECTOR’S NOTE: Maatta saw third-pairing minutes with the Blackhawks. His performance was going downhill during his final two seasons in Pittsburgh before he was shipped to Chicago. They could try to trade him in the off-season, but the decline in his play could make him tough to move.

Center Zack Smith underwent season-ending back surgery and could be a buyout candidate. He signed through next season with a cap hit of $3.25 million.

SPECTOR’ S NOTE: Smith can’t be bought out if he hasn’t fully recovered from surgery whenever the buyout period rolls around.

← NHL Morning Coffee Headlines - June 1, 2020 Buffalo Sabres Must Overcome Their Culture of Losing →
We use cookies on our website to give you the most relevant experience by remembering your preferences and repeat visits. By clicking “Accept”, you consent to the use of ALL the cookies.
Do not sell my personal information.
Cookie SettingsAccept
Manage consent