​What next for the Sabres after their management purge? What are the Capitals’ off-season trade targets? Find out in today’s NHL rumor mill.

THE HOCKEY NEWS: Matt Larkin wonders if the Buffalo Sabres replacing Jason Botterill as general manager with Kevyn Adams will be enough to fix the struggling club. 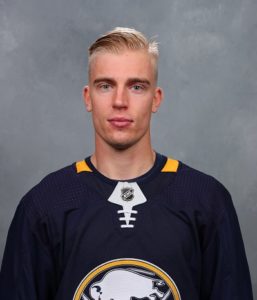 He feels Adams will have “lots of runway” to re-sign key restricted free agents Sam Reinhart, Victor Olofsson, and Linus Ullmark. He’ll also have plenty of time to fill out the roster for next season. The Sabres currently have 10 players (four forwards, five defensemen, and a goalie) under contract for 2020-21.

Adams could dramatically reshape the Sabres for next season. Larkin, however, wonders how much agency he’ll have to do so.

NBC SPORTS: James O’Brien also weighed in on the key decisions facing Adams. Defenseman Rasmus Ristolainen could be their most notable trade candidate. He’s frequently come up in trade rumors for some time, leading O’Brien to wonder if Botterill sought too much for the blueliner or was his market value really that cold. He suggests the Sabres might be better off cutting their losses with Ristolainen even at a discount rate.

O’Brien also wondered if Adams will stick with the goalie tandem of Ullmark and Carter Hutton or plunge into a pretty promising UFA market. He could then attempt to trade Hutton or send him to the minors.

The Sabres have lots of salary-cap room next season. Adams could attempt to go big in the UFA market by targeting St. Louis Blues defenseman Alex Pietrangelo or Arizona Coyotes winger Taylor Hall. However, O’Brien notes the Sabres have been burned before with expensive UFA signings. He also suggested perhaps targeting a cap-strapped team, like the Tampa Bay Lightning, in the trade market.

SPECTOR’S NOTE: The Pegulas apparently slashed their management and scouting staffs in part to cut costs. Perhaps that mindset also extends to next season’s salary-cap payroll.

Cap Friendly indicates they have over $47 million invested in next season’s roster. That will obviously rise as they re-sign RFAs like Reinhart, Olofsson, and Ullmark, and perhaps Brandon Montour or a UFA like Wayne Simmonds. Nevertheless, they must still spend to get over the $60 million cap floor and ice a competitive roster.

Adams could surprise us by chasing one or two big-name UFAs, but I think he’ll make modest dips into that pool. I can see him trying to pry away a decent player or two from clubs looking to shed salary. Perhaps he dangles Ristolainen to a team that’s deep in scoring forwards but in need of blueline depth.

THE ATHLETIC (subscription required): In a recent mailbag segment, Tarik El-Bashir was asked about any possible off-season trade candidates or targets for the Washington Capitals.

El-Bashir said he doesn’t get the sense that Capitals management is eager to move anyone under contract for next season. As for possible options to address next season, he believes they’ll need a veteran top-four defenseman and doesn’t rule out re-signing Brenden Dillon. They’ll also need a third-line left wing to replace Ilya Kovalchuk and a proven goalie to back up Ilya Samsonov.

← NHL Morning Coffee Headlines - June 17, 2020 NHL Return-to-Play Plan: The Plight of The Seven Non-Playoff Teams →
We use cookies on our website to give you the most relevant experience by remembering your preferences and repeat visits. By clicking “Accept”, you consent to the use of ALL the cookies.
Do not sell my personal information.
Cookie SettingsAccept
Manage consent