SPORTSNET: Chris Johnston reports Phase 3 (training camp) would begin on July 13, with teams traveling to the hub cities as soon as July 25 for Phase 4. 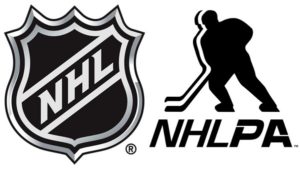 The NHL and NHLPA are reportedly closing in on a return-to-play plan and CBA extension (Image via NHL.com).

THE ATHLETIC’s Michael Russo reports Las Vegas fell out of the running as a hub city because of recent reports of a rise of positive COVID-19 tests among hotel and casino employees. That defeated the purpose of an NHL player/staff bubble.

SPECTOR’S NOTE: Vegas was considered a lock to be a hub city until earlier this week when logic finally prevailed. Canada is trending in the right direction as active COVID-19 cases steadily decline.

The league’s return-to-play plan, which includes daily testing, received approval from the Canadian government, the governments of Alberta and Ontario, and the municipal governments of Edmonton and Toronto.

TSN: Bob McKenzie also reported the NHL and NHL Players’ Association appear to be drawing closer to an agreement on a return-to-play plan and an extension to the collective bargaining agreement. However, he warns nothing is settled until both sides ratify a tentative deal. The NHLPA membership could vote on Friday or Saturday.

Frank Seravalli reports the league and PA agreed to an interim extension on all expiring player contracts pending completion of the CBA extension and agreement on Phases 3 and 4 of the return-to-play plan. He also indicates part of the agreement would allow any player to opt-out of return-to-play.

The deals would require two-thirds majority approval from the NHL Board of Governors, but a simple majority from the NHLPA membership. Seravalli indicates it would be a three- or four-year extension to the current CBA. The players are also expected to receive small lifestyle benefits in this deal, such as increases in medical subsidies in retirement and player health insurance, and increase rental/mortgage reimbursement following trade or reassignment.

SPORTSNET: Chris Johnston reports the players’ pay would be delinked from league revenue for the next two years with a 20 percent escrow cap and a fixed salary cap of $81.5 million before eventually returning to a system based on the current model. The players’ would also defer 10 percent of their salaries for next season to a later date.

Johnston also reports there were negotiations on changing the rules on salary structure, with limits on signing bonuses and restrictions on salary variance from year to year. The league is also willing to participate in the 2022 and 2026 Winter Olympics, pending an agreement with the International Olympic Committee on insurance, travel, and other issues.

THE ATHLETIC (subscription required): Michael Russo speculates the IOC’s position on those issues may be softening if the league and the PA made that agreement on Olympic participation. He also cited a player agent saying his clients still don’t have a clear understanding of the economic impact of playing this season versus not playing. They also have concerns over the possible health risks associated with playing this summer.

SPECTOR’S NOTE: We could learn more details on both plans over the next two days. As McKenzie points out, nothing is set in stone yet. The players’ concerns are legitimate and could potentially derail this agreement if not sufficiently addressed.

I’m curious to see what the major CBA changes could be once the deal is ratified.  No surprise the league wants to close the loophole on paying the bulk of a player’s salary in signing bonuses. I also expected they would attempt to narrow the salary variance, currently at 50 percent.

Olympic participation was considered among the main sticking points in CBA talks prior to the pandemic interrupting the regular season. That’s a significant concession from the league to the players, but I’m interested in what it will cost the players down the road.

The poison pill, as always, could be escrow. As Seravalli recently noted, the players could end up paying back escrow shortfalls from the pandemic for years if league revenues fail to substantially rebound over the next two or three seasons.

VANCOUVER SUN: Canucks winger Jake Virtanen is catching flak for failing to practice proper social distancing during a recent visit to a Vancouver nightclub. Several teammates took to Twitter condemning what they consider his reckless behavior, especially with the league set to implement the next phase of its’ return-to-play plan.

The Canucks say they’ve spoken with Virtanen, who hasn’t taken part in Phase 2 voluntary small-group training with the club. He will be tested before rejoining the team.

THE ORANGE COUNTY REGISTER: The Anaheim Ducks signed an affiliate agreement with the ECHL’s Tulsa Oilers.

← NHL Rumor Mill - July 1, 2020 NHL Rumor Mill - July 2, 2020 →
We use cookies on our website to give you the most relevant experience by remembering your preferences and repeat visits. By clicking “Accept”, you consent to the use of ALL the cookies.
Do not sell my personal information.
Cookie SettingsAccept
Manage consent