THE ATHLETIC (subscription required): In a recent mailbag segment, Joe Smith was asked several questions about how the Tampa Bay Lightning could address their salary-cap crunch for next season. 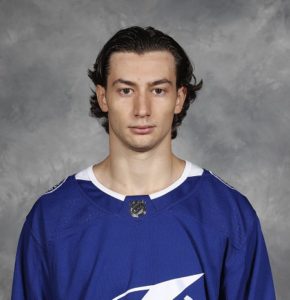 Smith feels many teams, including the Buffalo Sabres and Minnesota Wild, would be interested in center Anthony Cirelli. He also believes there will be plenty of interest in young defenseman Mikhail Sergachev. Both are restricted free agents at season’s end.

Smith suggests the asking price for either player could be at least a strong prospect and one or more high picks. Asked if the Bolts could get a player in return like Wild defenseman Matt Dumba for Cirelli, he doesn’t see how that player’s contract  ($6 million annual average value) would fit within their limited cap space.

SPECTOR’S NOTE: Cirelli or Sergachev could be shopped if Lightning general manager Julien BriseBois feels he can’t afford to keep both players. However, I believe his priority is to re-sign them and move out one or two other players to free up sufficient cap room for their new contracts.

Both are coming off entry-level contracts and lack arbitration rights. BriseBois could use that leverage to sign both to affordable short-term contracts, but one of them could sign an offer sheet with another club.

Smith feels Alex Killorn is the most likely to be shopped in the off-season. His value is high, he’s got only a few years left on his contract with an affordable $4.5 million AAV, and his limited no-trade clause provides some flexibility.

SPECTOR’S NOTE: Moving Killorn will help but the Bolts could be forced to shed another salary. Speculation suggests Tyler Johnson, Ondrej Palat, or Yanni Gourde, but they carry full no-movement clauses. Smith suggested they could deal away one of the RFAs. He felt contract buyouts would be the last resort.

Asked about what the Lightning’s threshold would be if Sergachev signed an offer sheet, Smith feels $7 million is their cutoff.

SPECTOR’S NOTE: Many clubs lack sufficient cap space to go the offer-sheet route this summer, but some have the cap space to make that pitch. However, that depends on Sergachev’s willingness to sign one. He could stick with the Lightning on a short-term bridge deal with the promise of greater riches down the road. The same goes for Cirelli.

SPORTSNET: In a recent mailbag segment, Ken Wiebe was asked if there was any word on the Winnipeg Jets re-signing Dylan DeMelo. The Jets acquired the 27-year-old defenseman in February. He’s due to become an unrestricted free agent in the off-season.

Re-signing DeMelo is likely a priority for Jets GM Kevin Cheveldayoff. Despite the flat salary cap, he’s got more short-term flexibility to make a move or two this summer. While DeMelo could seek long-term stability, Wiebe speculates he might take a short-term deal in hope league economics improve in a few years.

SPECTOR’S NOTE: Wiebe reported DeMelo indicated there hasn’t been much conversation regarding a new contract, but he feels he’s fit in well with the Jets and would welcome a chance to re-sign.

Most contract talks are on hold for now as teams prepare for the upcoming playoff tournament. If Cheveldayoff is interested in re-signing DeMelo, and I think he could be, those discussions will likely begin once the playoffs are over.

DeMelo’s earned $900K annually on his current contract and will be seeking a significant raise. Provided his asking price is reasonable – around $3 million annually – he could remain with the Jets.

← NHL Morning Coffee Headlines - July 22, 2020 2020 NHL Awards: Hart, Norris, and Selke Finalists →
We use cookies on our website to give you the most relevant experience by remembering your preferences and repeat visits. By clicking “Accept”, you consent to the use of ALL the cookies.
Do not sell my personal information.
Cookie SettingsAccept
Manage consent