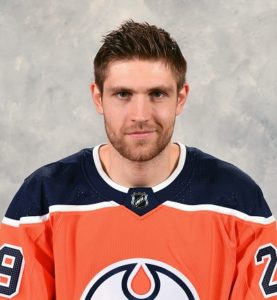 Edmonton Oilers forward Leon Draisaitl is among the finalists for the Hart Trophy (Photo via NHL Images).

SPECTOR’S NOTE: These three are also the finalists for the Ted Lindsay Award honoring the most valuable player as voted by the NHL Players Association membership.

THE BOSTON GLOBE: Bruins goaltender Tuukka Rask has a small fracture in one of the fingers on his left hand but he doesn’t believe that will impede his play. He said the injury happened several weeks ago and it’s feeling much better.

SPECTOR’S NOTE: Nevertheless, you can bet opposing players will test that hand by firing more shots to his glove hand wherever possible.

Meanwhile, Corey Crawford’s chances of returning to the ice before the Blackhawks head to Edmonton on Sunday appear to be dwindling. Teams are allowed to bring 31 players to the upcoming playoff tournament. The club isn’t ruling out saving a roster spot for Crawford.

SPECTOR’S NOTE: Crawford hasn’t participated in Phase 3 training, sparking speculation he’s nursing an injury. Without their starting goaltender, the Blackhawks could face long odds of upsetting the favored Edmonton Oilers in their qualifying round tournament.

NBC SPORTS PHILADELPHIA: Flyers goaltender Carter Hart left the ice during the first period of a three-period scrimmage yesterday and didn’t return. Because of league injury protocols, the Flyers provided no details for Hart’s departure. Local broadcaster Colby Cohen said he was told Hart experienced minor back spasms and could return in a day or two.

CBS SPORTS: Toronto Maple Leafs winger Zach Hyman returned to the ice Tuesday after missing a pair of practices to a leg injury suffered when he blocked a shot on Friday.

TSN: St. Louis Blues defenseman Jay Bouwmeester won’t be traveling with the club to Edmonton for the upcoming playoff tournament. He’s been sidelined since suffering a cardiac incident on Feb. 11 during a game with the Anaheim Ducks.

Speaking of the Blues, STLTODAY.COM reports Ivan Barbashev will miss one or two round-robin games and the start of the opening round of the playoffs to attend the birth of his child. He’ll have to test negative for COVID-19 four times in four days before he can rejoin his teammates in Edmonton.

SPECTOR’S NOTE: Washington Capitals forward Lars Eller and Carl Hagelin will also be departing the quarantine bubble in Toronto to be with their wives when they give birth. They’ll have to go through the same testing before rejoining the Capitals.

TSN: Darren Dreger reports every player traveling to the bubble cities in Edmonton and Toronto for the upcoming playoff tournament must have three negative COVID-19 tests within a 48-hour period.

← NHL Free Agent Flat Cap Fallout - Metropolitan Division NHL Rumor Mill - July 22, 2020 →
We use cookies on our website to give you the most relevant experience by remembering your preferences and repeat visits. By clicking “Accept”, you consent to the use of ALL the cookies.
Do not sell my personal information.
Cookie SettingsAccept
Manage consent