​A look at the five teams affected the most by a flat salary cap in today’s NHL rumor mill.

THE HOCKEY NEWS: Matt Larkin lists the Tampa Bay Lightning, St. Louis Blues, Chicago Blackhawks, Toronto Maple Leafs, and the Arizona Coyotes as the five clubs that will be most affected by a flat salary cap in 2020-21.

The Lightning has 15 players signed for next season with $5.33 million in projected cap space. That won’t be enough to re-sign restricted free agents Anthony Cirelli and Mikhail Sergachev. Larkin suggests Yanni Gourde and Alex Killorn as trade candidates. Gourde has a no-trade clause but Larkin thinks he could waive it for a fresh start elsewhere after seeing a reduced role this season. Larkin’s no-trade clause becomes a partial listing of 16 no-trade destinations.

SPECTOR’S NOTE: The Athletic’s Joe Smith (subscription required) considers Killorn the top trade candidate, in part because of the flexibility his modified no-trade provides the Lightning. He also suggests Tyler Johnson ($5 million AAV through 2023-24) might be willing to waive his no-trade clause if it’s for a destination where he’d have a top-six center role. Cedric Paquette ($1.65 million through next season) could also be a trade option.

I think there will be more interest in Killorn, who’s more affordable ($4.45 million annual average value through 2022-23) than Gourde ($5.16 million AAV through 2024-25) and has a better reputation as a two-way forward. There’s no certainty Johnson would agree to be moved and his lengthy contract could be a deal-breaker for some clubs during these uncertain times. 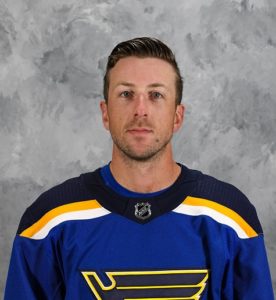 The Blues have 20 players under contract for next season with a little over $2 million in cap space and defenseman Alex Pietrangelo and Vince Dunn to re-sign. Larkin speculates they’ll attempt to move out goaltender Jake Allen ($4.35 million AAV through 2020-21) and suggests keeping an eye on winger Jaden Schwartz ($5.35 million AAV through ’20-’21, 15-team no-trade list).

Meanwhile, The Athletic’s Jeremy Rutherford considers moving Schwartz far-fetched while the Blues’ championship window remains open. They could buy out the final season of Alexander Steen’s contract ($5.75 million AAV) but they’ll only get $2.4 million in cap relief for next season.

If the Blues intend to re-sign Pietrangelo and Dunn, significant cost-cutting is in order. Any way you slice it, however, it means parting with a couple of meaningful players.

The Blackhawks have 18 players inked for next season with $7.35 million in projected cap space. Larkin believes they could get much-needed cap relief if Brent Seabrook ($6.875 million AAV through 2023-24) and Andrew Shaw ($3.9 million AAV through 2021-22) go on long-term injury reserve for next season. Seabrook however, is attempting to return for the upcoming playoff tournament.

SPECTOR’S NOTE: Larkin and The Athletic’s Scott Powers point out the Blackhawks lack sufficient cap space to re-sign goalie Corey Crawford and forwards Dominik Kubalik and Dylan Strome. Powers suggests they could buy out defenseman Olli Maatta ($4.083 million AAV through 2021-22) and center Zack Smith ($3.25 million through 2020-21). The combined savings (over $5.5 million) along with Shaw potentially remaining on LTIR would free up valuable cap room to re-sign those key players.

The Toronto Maple Leafs have 16 players signed for next season with $4.59 million in projected cap room. With Tyson Barrie expected to depart via free agency, Larkin believes they won’t have enough space to bring in one or two impactful right-shot defensemen. GM Kyle Dubas could attempt to shop a mid-tier forward like Kasperi Kapanen, Andreas Johnsson, or Alexander Kerfoot for a blueliner. He also wonders if Dubas might attempt to acquire more LTIR contracts with David Clarkson and Nathan Horton coming off the books in the off-season.

SPECTOR’S NOTE: The Toronto Star’s Kevin McGran points out the cost of re-signing Travis Dermott and Ilya Mikheyev could eat up most or all of that cap space. He also anticipates one of those mid-tier forwards could be shopped, including Zach Hyman among them. Unless the CBA extension prohibits clubs from acquiring the contracts of players on permanent LTIR, it wouldn’t be surprising if Dubas goes to that well again to gain some wiggle room.

The Arizona Coyotes have 16 players signed with just $1.51 million available, though they’ll gain some cap relief with Marian Hossa ($5.75 million) on permanent LTIR. They need more than that if they hope to re-sign pending UFA winger Taylor Hall. Larkin suggests packaging center Derek Stepan ($6.5 million through next season) with a sweetener to free up more room.

SPECTOR’S NOTE: It could take one helluva sweetener to tempt a rival club with more cap space into taking Stepan’s contract.

← NHL Morning Coffee Headlines - July 9, 2020 NHL Teams That Could Benefit From A Flat Salary-Cap in 2020-21 →
We use cookies on our website to give you the most relevant experience by remembering your preferences and repeat visits. By clicking “Accept”, you consent to the use of ALL the cookies.
Do not sell my personal information.
Cookie SettingsAccept
Manage consent