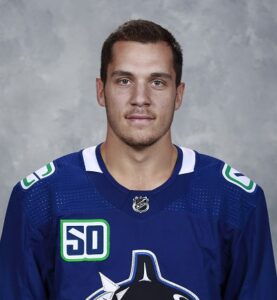 NHL.COM: Vancouver Canucks captain Bo Horvat opened and finished the scoring as he led his club to a 4-3 overtime victory over the St. Louis Blues, taking a 2-0 lead in their best-of-seven opening-round series. Horvat’s game-winner came after the Blues’ Jaden Schwartz tied the game in the dying seconds of regulation. Canucks forwards Elias Pettersson and Brock Boeser each had two points, as did the Blues’ Alex Pietrangelo and David Perron.

SPECTOR’S NOTE: The Blues outhit the Canucks 41-27 but struggled at times to keep up with their speedy young opponents. They’re also getting no production from sniper Vladimir Tarasenko. The Canucks have an opportunity to take a stranglehold on this series in Game 3 on Sunday.

Tomas Tatar and Jesperi Kotkaniemi each scored twice as the Montreal Canadiens thumped the Philadelphia Flyers 5-0 to square their first-round series at one game apiece. Carey Price kicked out 30 shots for his second shutout of the postseason. Flyers winger Travis Konecny left the game in the third period after injuring his left foot blocking a shot.

SPECTOR’S NOTE: Determined to win this game for sidelined coach Claude Julien, the Canadiens came out flying with a rare dominating performance. Flyers coach Alain Vigneault expressed his displeasure following the game over Habs interim coach Kirk Muller putting his top power-play unit on the ice late in the game. Muller said it was merely to give a little more work to his club’s erratic play with the man advantage.

Vigneault indicated he’d try to use that as motivation for his players in Game 3. If that’s his intended rallying point, the Flyers could be in worse shape than we thought. They’re a better team than what we’ve seen thus far in this series, but most of their scoring forwards have fired blanks thus far in this postseason. If those players don’t start scoring soon, the Flyers could be in big trouble against the underdog Habs.

Calgary Flames goaltender Cam Talbot made 35 saves to shut out the Dallas Stars 2-0 in Game 3 of their series, putting his club up two games to one. Mikael Backlund and T.J. Brodie were the goalscorers for the Flames, who hope to have sidelined winger Matthew Tkachuk back in their lineup for Game 3 on Sunday. Earlier in the day, the Flames announced forward Austin Czarnik has returned home to attend to a personal matter.

SPECTOR’S NOTE: Talbot stole this one for the Flames, as the Stars dominated the play for most of this contest. They were also their own worst enemies, missing several quality scoring chances.

SPECTOR’S NOTE: The Islanders were the better-disciplined team in this contest, as the Capitals were sloppy defensively and took too many unnecessary penalties. Without a better effort in Game 3, the Caps could fall into a hole too deep to climb out of against the determined Isles.

The Colorado Avalanche took a 2-0 series lead over the Arizona Coyotes with a 3-2 victory. Andre Burakovsky snapped a 2-2 tie with 2:53 remaining in regulation.

SPECTOR’S NOTE: This was a disappointing defeat for the Coyotes, who had a strong bounce-back effort after being dominated by the Avs in Game 1. Game 3 now becomes a must-win for the Desert Dogs.

NBC SPORTS BOSTON: Bruins goaltender Tuukka Rask has opted out of participating further in the return-to-play plan. In a statement released by the team, Rask indicated he’s making the decision for family reasons. “I want to be with my teammates competing, but at this moment there are things more important than hockey in my life, and that is being with my family.”  Bruins general manager Don Sweeney said Rask’s priorities are in the right order, noting the goalie had a newborn baby daughter born just months ahead of the return-to-play in Toronto.

SPECTOR’S NOTE: Losing their starting goaltender is a significant blow for the Bruins in the midst of their opening-round series with the Carolina Hurricanes. Backup Jaroslav Halak will take over the starter’s role, and NBC Sports suggests Daniel Vladar will be Halak’s understudy.

Some will rush to criticize Rask’s actions, but we don’t know the full story other than it’s for family reasons. He may have found being isolated from his family for weeks simply too difficult to bear. The Bruins and the league are respecting his decision. We should too.

Minnesota Wild defenseman Matt Dumba, New York Rangers goaltender Henrik Lundqvist, and New Jersey Devils blueliner P.K. Subban are the finalists for the King Clancy Memorial Trophy, presented annually to the player “who best exemplifies leadership qualities on and off the ice and has made a noteworthy humanitarian contribution in his community.”

THE BOSTON GLOBE: Bruins winger David Pastrnak didn’t practice yesterday and remains uncertain for Game 3 today against the Carolina Hurricanes. The 48-goal scorer was unfit to play in Game 2 following an apparent left injury in the previous game.

WGR550: The Buffalo Sabres are reportedly hiring Seth Appert as head coach of their AHL affiliate in Rochester.

LOS ANGELES TIMES: The Kings have suspended the mascot actor who performs as team mascot Bailey. He is being investigated for alleged sexual misconduct.

← NHL Playoffs: Canadiens Tie Series with Convincing Win over Flyers NHL Rumor Mill - August 15, 2020 →
We use cookies on our website to give you the most relevant experience by remembering your preferences and repeat visits. By clicking “Accept”, you consent to the use of ALL the cookies.
Do not sell my personal information.
Cookie SettingsAccept
Manage consent