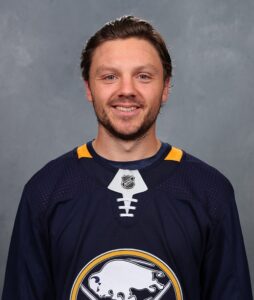 SPECTOR’S NOTE: Both are affordable short-term contracts that could lead to more lucrative deals for both players following next season. Reinhart, 24, exceeded 40 points in each of his five NHL seasons, including 65 points in 2018-19 and 50 points in 69 games last season. Ullmark, 27, took over as the Sabres’ starting goaltender last season, finishing with 17 wins in 34 games with a 2.69 goals-against average and .915 save percentage.

THE DETROIT NEWS: The Red Wings and Tyler Bertuzzi had their virtual salary-arbitration hearing yesterday and now await the arbiter’s decision. The Wings offered $3.15 million while Bertuzzi sought $4.25 million. The 25-year-old winger led the club with 21 goals and finished second in points with 48.

SPECTOR’S NOTE: Bertuzzi is the first player among the 26 who filed for arbitration this year to go before an arbiter. The report also notes the arbiter’s decision will be handed down within 48 hours of the hearing’s completion. Under the new collective bargaining agreement, the team and the player can no longer continue to negotiate once the hearing is completed.

THE PROVINCE: The Vancouver Canucks opted not to use their second buyout window on Sunday to buy out the remaining season of Brandon Sutter’s contract. He’s earning an annual average value of $4.35 million. General manager Jim Benning cited the 34-year-old center’s leadership and defensive skills as justification for retaining him.

SPECTOR’S NOTE: Cap Friendly indicates the Canucks are $1.5 million above the $81.5 million salary cap. The report suggested Benning has other options to become cap compliant for next season, such as putting Micheal Ferland (post-concussion symptoms) on long-term injury reserve if he’s unable to start next season. He could also demote a player or two to the minors.

THE SCORE: Martin Hanzal announced his retirement citing three back surgeries. The 34-year-old center spent 12 seasons in the NHL, with nearly 10 of them with the Arizona Coyotes. Traded to the Minnesota Wild at the 2017 trade deadline, he spent his final two seasons with the Dallas Stars, though injuries limited him to just 45 games. Hanzal finished his NHL career with 127 goals and 338 points in 673 games, as well as 13 points in 28 playoff contests.

SPECTOR’S NOTE: Best wishes to Hanzal in his future endeavors.