The latest on the NHL’s return-to-play plan for 2020-21, an update on Elias Pettersson, and more in today’s morning coffee headlines.

NHL.COM: Commissioner Gary Bettman said the league is exploring temporary hub cities, temporary divisional realignments and a reduced schedule as options for staging the 2020-21 season amid the COVID-19 pandemic. 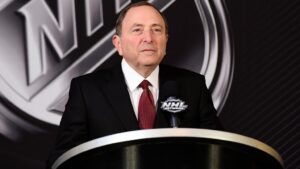 Bettman said he would never ask the players to return to a strict quarantine bubble similar to the 2020 Stanley Cup playoffs for an entire season. They’re exploring teams playing in their own arenas with or without fans, depending on the location, in hubs or a hybrid system.

The commissioner suggested teams would play for 10-to-12 days in hub cities without traveling, followed by returning home to their families for a week. He indicated they would have testing protocols and other things in place. While admitting it won’t be quite as effective as in a quarantine bubble, they believe they can minimize the risks “to the extent practical and sensible.”

Bettman indicated any return-to-play plan would be a collaborative effort with the NHLPA. The two sides have been in regular and constant communication but regular meetings have yet to begin.

Border restrictions between Canada and the United States, as well as travel limitations between certain states, could force a temporary divisional realignment based on region.

Bettman also pointed to a lack of fans in the stands and casual fans being less inclined to watch hockey during the summer as two key factors why television ratings were down for the 2020 playoffs.

OTTAWA SUN: Bruce Garrioch reports deputy commissioner Bill Daly sent a memo to all 31 teams stating the league believes progress toward finalizing a recommendation for the 2020-21 season to the board of governors is being made.

If negotiations with the NHLPA can be completed by Thursday, the terms will be presented to the upcoming board of governors meeting for approval.

Daly indicated the objective remains to start on Jan. 1 with the regular-season schedule concluding in late-April. That would mean a shortened schedule of 48-56 games, with the league crowning a Stanley Cup champion before the summer and returning with a normal 82-game schedule from October to April for 2021-22.

Because of border restrictions, the seven Canadian franchises could be in their own division for at least the start of the season.

SPORTSNET: Elliotte Friedman reports the NHL hopes to award the Stanley Cup by no later than July 15. He also said different sources have heard different potential lengths for the schedule, from as low as 56 to as high as 72 games, depending on when the season begins.

There’s a growing push for teams to play in their own buildings. One reason is the naming rights on those buildings. With fewer events, sponsorship deals could be affected.

One area of possible contention is player salaries for 2020-21. The players agreed to accept 72 percent of their gross pay for the upcoming season, but the owners feel they should be prorated if a significant decline in attendance creates losses higher than the 20 percent escrow could withstand.

SPECTOR’S NOTE: Much of what Bettman said has already been previously reported or speculated upon. Bear in mind that those points he raises remain under consideration and haven’t officially approved.

The league’s plan also remains to have fans gradually returning to the arenas over the course of the season, with the hope of full arenas when the playoffs open in the spring. However, that’s going to depend on the severity of the pandemic in each region. Some could have loosened restrictions allowing a reduced number of socially distanced fans in the stands as we’ve seen in the NFL.

There was speculation suggesting the NHL could wait until as late as March to reopen to allow more fans into the stands by that point. Based on Garrioch’s report, however, the push remains to start in January and award the Cup by no later than mid-July to avoid having the playoffs drag on too deeply into the summer. I also think they want to avoid having to go up against the Tokyo Summer Olympics set to begin in late July.

While the league and the PA in constant talks, it’s interesting to note the supposed “return-to-play” committee still hasn’t met yet. It appears the leadership of both sides could be hashing out the framework of a plan and leave the finer details to the committee.

I’ve recently pointed out, however, the league is getting pressed for time to start on Jan. 1. All the players still have to return to their home cities. Training camps will have to begin in early-December, with the seven clubs that didn’t qualify for the 2020 playoffs probably to hit the ice by no later than the end of this month. The Christmas holiday break will also complicate an exhibition-game schedule.

THE SCORE: cites a report in The Athletic indicating the Vancouver Canucks haven’t yet begun substantive contract extension talks with Elias Pettersson. However, that lack of progress isn’t anything to be concerned about.

SPECTOR’S NOTE: Pettersson quickly established himself as the Canucks’ best player since his debut in 2018-19. He won the Calder Trophy as rookie of the year that season with 66 points, followed by 66 points in 68 games last season. Pettersson, who turns 22 on Nov. 12, has yet to reach his playing prime. He’s entering the final season of his entry-level contract and will receive a significant raise in his next deal with the Canucks.

SPORTSNET: The Seattle Kraken expect to have the main portion of their training facility ready to open next July.

ECHL.COM: released its schedule of critical dates that will see it gradually start its season in two stages. The first stage will see 13 teams start their seasons on Dec. 11 with the remainder beginning on Jan. 15.