FLORIDA HOCKEY NOW (subscription required): Jimmy Murphy wondered if the Calgary Flames might shop left-side defenseman Noah Hanifin to bring in a right-side defenseman and to shed some cap space. The sources he spoke with believe Hanifin isn’t been shopped but didn’t rule out Flames general manager Brad Treliving listening to a “hockey trade” offer. 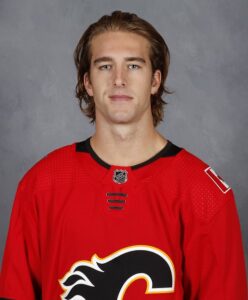 The Flames have over $1 million in cap space, with Hanifin having four years remaining on his contract with an annual average value of $4.95 million. Murphy suggests the Boston Bruins, Detroit Red Wings, Buffalo Sabres and Columbus Blue Jackets as teams that could initiate calls.

SPECTOR’S NOTE: The Bruins might have to part with Brandon Carlo ($2.5 million), the Red Wings with Filip Hronek ($714K), the Sabres with Brandon Montour ($3.85 million), and the Blue Jackets with David Savard ($4.25 million).

The Bruins would have to find a suitable right-side replacement if they swap Carlo for Hanifin. I don’t see the Wings trading away the promising Hronek. Savard is a UFA next summer and won’t provide much cap savings this season for the Flames. Montour is also slated to become UFA after 2020-21 and the Flames could prefer someone with more term left on their contract.

SPECTOR’S NOTE: Nill could put Bishop and Seguin on long-term injury reserve to make an affordable signing or two to offset their absences on a short-term basis. It could depend, however, on when the 2020-21 season begins. Bishop and Seguin could be good to go if the season opens in March.

THE DALLAS MORNING NEWS: In a recent mailbag segment, Matthew DeFranks was asked about the possibility of Corey Perry returning with the Stars. He believes the 35-year-old winger would have to take a pay cut on the $1.5 million in base salary and $1.75 million in bonuses that he was paid last season. He cited recent rumors linking Perry to the Ottawa Senators and noted the Stars want to inject some youth into their forward lines.

SPECTOR’S NOTE: I’ve believed Perry could return to the Stars for another season. I’m not so sure now after reading DeFranks’ take. They have the cap space to sign him but he might be reluctant to accept a pay cut. We’ll see.

← NHL Morning Coffee Headlines - November 10, 2020 NHL Morning Coffee Headlines - November 11, 2020 →
We use cookies on our website to give you the most relevant experience by remembering your preferences and repeat visits. By clicking “Accept”, you consent to the use of ALL the cookies.
Do not sell my personal information.
Cookie SettingsAccept
Manage consent