What it might cost the Oilers to re-sign Ryan Nugent-Hopkins, Kasperi Kapanen’s role with the Penguins and more in today’s NHL morning coffee headlines.

NBC SPORTS: Adam Gretz examined how much it might cost the Edmonton Oilers to re-sign Ryan Nugent-Hopkins. The 27-year-old center/winger is slated to become an unrestricted free agent next summer. He’s averaged 29 goals and 69 points per 82 games over the last three seasons. Gretz suggests a $7 million annual average value would be within reason for the Oilers if they spend to the cap in 2021-22. 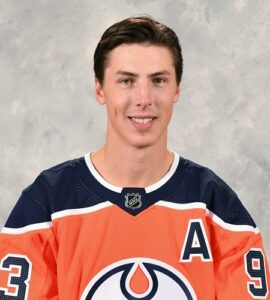 How much will it cost the Edmonton Oilers to re-sign Ryan Nugent-Hopkins? (NHL Images)

SPECTOR’S NOTE: That would be a $1 million raise over Nugent-Hopkins’ current annual cap hit. The short-term economic uncertainty could make him receptive to that pay bump on a long-term deal.

EDMONTON JOURNAL: Speaking of the Oilers, Kurt Leavins reports there’s nothing new regarding Ethan Bear’s contract talks. That has less to do with the 23-year-old defenseman and more to do with the status of Oscar Klefbom and his LTIR status.

SPECTOR’S NOTE: As per Cap Friendly, the Oilers are over $242K above the $81.5 million cap for 2020-21. Klefbom could require season-ending shoulder surgery, allowing the Oilers to spend over the cap by the equivalent of his $4.167 million AAV if he’s placed on long-term injury reserve. The Oilers will likely sign Bear to an affordable short-term bridge deal.

TRIBLIVE.COM: Pittsburgh Penguins coach Mike Sullivan confirmed Kasperi Kapanen will skate on the club’s top line alongside Sidney Crosby and Jake Guentzel. The Penguins acquired Kapanen from the Toronto Maple Leafs in August. Sullivan cited Kapanen’s speed that would make him complimentary to Crosby and Guentzel.

SPECTOR’S NOTE: Sullivan also noted Kapanen tallied 20 goals in 2018-19 as a secondary scorer with the Leafs. He’ll have the opportunity to tally much more if he clicks with his new all-star linemates.

NBC SPORTS BAY AREA: San Jose Sharks defenseman Mario Ferraro said the departure of Joe Thornton hasn’t fully sunk in yet. After 15 seasons with the Sharks, Thornton recently signed a one-year contract with the Maple Leafs. Ferraro believes his teammates are really going to miss the big center when they return for training camp.

THE SCORE: The Tampa Bay Lightning are the first team to have their names engraved on the Stanley Cup when each member of the club gets their day with the trophy.

THE PROVINCE: Two Vancouver Canucks fans are leading a campaign to have Gino Odjick become a member of the club’s Ring of Honour. Odjick, a popular enforcer with the Canucks from 1990-91 to 1997-98, is battling cardiac amyloidosis.

← NHL Rumor Mill - November 14, 2020 Sunday NHL Rumor Roundup - November 15, 2020 →
We use cookies on our website to give you the most relevant experience by remembering your preferences and repeat visits. By clicking “Accept”, you consent to the use of ALL the cookies.
Do not sell my personal information.
Cookie SettingsAccept
Manage consent