TSN: The New York Islanders avoided arbitration with Ryan Pulock as the 26-year-old defenseman agreed to a two-year, $10 million contract. The annual average value is $5 million, but Pulock will earn $3.34 million in actual salary this season and $6.66 million in 2021-22. 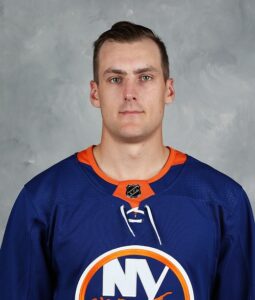 SPECTOR’S NOTE: Pulock will be an unrestricted free agent in two years’ time. He’ll be in line for a significant raise on his next contract.

Cap Friendly indicates this signing leaves the Islanders with $3.9 million in cap space with Mathew Barzal still to sign. That’s raising speculation over what general manager Lou Lamoriello will do to free up cap space for Barzal. I’ll have more about that later this morning in the Rumors section.

SPECTOR’S NOTE: Nyquist’s absence is a big hit for the Blue Jackets’ anemic offense. He finished second among Jackets’ scorers last season in assists (27) and points (42) and fourth in goals with 15.

That’s sparked conjecture over how they’ll offset Nyquist’s absence. You can read about that later this morning in the Rumors section.

SPECTOR’S NOTE: His hearing is slated for Nov. 6.

WGR 550: The Buffalo Sabres signed goaltender Dustin Tokarski to a two-year, two-way contract with an annual average value of $725K.

EDMONTON JOURNAL: The Oilers signed defenseman William Lagesson to a two-year contract worth $725K annually. It’s a two-way deal during the first season.

STARTRIBUNE.COM: The Minnesota Wild extended their ECHL affiliation with the Allen Americans for 2020-21.

← The Dog Days Have Arrived in the 2020 NHL Offseason NHL Rumor Mill - November 5, 2020 →
We use cookies on our website to give you the most relevant experience by remembering your preferences and repeat visits. By clicking “Accept”, you consent to the use of ALL the cookies.
Do not sell my personal information.
Cookie SettingsAccept
Manage consent