How will the Islanders find cap space to sign Mathew Barzal? How will the Blue Jackets replace sidelined Gustav Nyquist? Check out the latest in the NHL rumor mill. 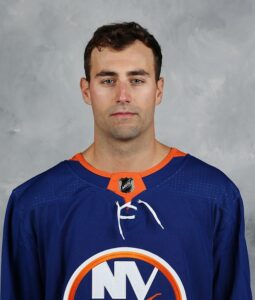 Pulock filing for arbitration provides the Isles with a second buyout window that opens for 24 hours on Friday. However, they can only buy out a player earning an annual average value of over $4 million, ruling out Leo Komarov and Thomas Hickey as options.

Lamoriello could attempt another cost-cutting trade. It’ll be difficult to find takers for Johnny Boychuk ($6 million AAV) or Andrew Ladd ($5 million AAV) in this economic climate.

THE HOCKEY NEWS: Matt Larkin indicates buying out Boychuk or Ladd won’t provide much immediate relief. The way their salaries are structured, a Boychuk buyout would give the Isles $833K in savings for 2020-21 while Ladd’s would be over $666K.

Larkin wondered if Lamoriello could place a player like Ladd on long-term injury reserve. Failing that, he’ll have to dump another salary via trade.

THE ATHLETIC: Arthur Staple also weighed in on the Islanders’ options. He indicates Martin, Greene and Schneider already have agreed-upon deals with the club but they’re being kept off the books for now in case Barzal signs an offer sheet.

Lamoriello could take a drastic step like buying out Jordan Eberle, Josh Bailey or Nick Leddy but Staple doubts he’ll go that far. He also doubts Barzal will get $10 million annually from the Isles unless Lamoriello can find a taker for Boychuk and at least one other contract.

SPECTOR’S NOTE: Staple believes Lamoriello will have to get creative given how the trade market has dried up and the complications of going the LTIR route. He has a well-earned reputation for creativity when it comes to finding wiggle room under the cap, but this situation will still be a significant challenge.

Leddy has surfaced as a trade candidate. He’s under 30, doesn’t have a long injury history like Boychuk and Ladd, lacks no-trade protection and carries an annual cap hit of $5.5 million. With Devon Toews shipped to Colorado last month in a cost-cutting deal, it’s unlikely Lamoriello parts with Leddy now.

He could try to move Komarov ($3 million AAV through 2021-22, seven-team no-trade list) and Hickey ($2.5 million AAV, lacks no-trade protection. Both could be easier to move than Boychuk and Ladd, though it will still be challenging drumming up interest for either guy.

HOW WILL THE JACKETS REPLACE NYQUIST?

Larkin acknowledged adding Hoffman won’t make the Jackets a Stanley Cup contender, but it would provide a much-needed injection of offense. He’s the type of player who can score given the opportunity at five-on-five or on the power play, which he’ll certainly get with the Jackets.

THE ATHLETIC: Aaron Portzline reports Blue Jackets GM Jarmo Kekalainen isn’t a big fan of free agency. Instead, he’s expected to continue to play the waiting game with the handful of cap-strapped NHL clubs in the hope one of them will be willing to trade away a quality player on the cheap.

Portzline also examined internal options for the Jackets. They could slide Nick Foligno or Boone Jenner into left wing on the second line. Nyquist’s absence could also create an opportunity for rookie Liam Foudy to skate on the third line with Mikko Koivu and either Foligno or Jenner.

SPECTOR’S NOTE: The Jackets still have to sign first-line center Pierre-Luc Dubois. With over $12 million in cap space, however, they’ve got sufficient room to do that and to find a suitable short-term replacement for Nyquist.

Hoffman is the best choice in the UFA market. He’d prefer a long-term contract but recent reports indicated he’d accept a one-year deal worth $6 million. That’s probably too rich for Kekalainen’s blood. He could be keeping an eye on the Lightning to see if he can land Tyler Johnson or Alex Killorn.

As with his efforts to sign Dubois, Kekalainen can afford to remain patient. He might not move on finding Nyquist’s replacement until training camp, which could be at least two months away.