The latest on the stalled return-to-play talks between the NHL and NHLPA in today’s morning coffee headlines.

TSN: Darren Dreger reports the NHL still has Jan. 1 as its target date for starting the season but it is looking at a later date. They’re also looking at starting up training camp following the holidays in late December or early January. He also reports league commissioner Gary Bettman and NHLPA executive director Donald Fehr resumed discussions over the weekend and those talks continued on Monday. Dreger suggested a mid-January start is the likely target date. 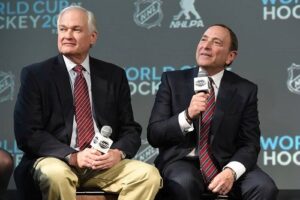 Dreger also said the players remain unhappy over the league’s proposals for increased escrow and salary deferral rates. Some of them wonder why Bettman did offer up some sort of give-back from the owners before requesting another increase in those rates. He believes there’s still a lot of work to be done to reach common ground.

Jeff O’Neill ultimately believes the players will accept the league’s requests. Otherwise, they won’t play and won’t get paid for this season.

OTTAWA SUN: Bruce Garrioch cites NHL insider John Shannon reporting sources from the NHL and NHLPA confirm there have been discussions but no progress on revisiting this summer’s Memorandum of Understanding on the CBA extension.

Facing the prospect of starting the season with empty arenas due to COVID-19, the league is requesting another $300 million in savings from the players in the form of increased escrow and salary deferral rates. Garrioch points out the players have every right to kick the can down the road on escrow, but if they don’t more now they’ll have to do so in the latter years of the deal.

SPECTOR’S NOTE: The good news is that at least Bettman and Fehr have resumed discussions. Dreger’s report also indicates the league is leaning toward a more realistic potential start date most of us anticipated for the season.

TORONTO STAR: Kevin McGran predicts it will take four weeks from the time an agreement is reached until the puck drops on the season. If it’s reached by early January the season could open in early February and conclude in late June.

McGran also reports Bettman kept the NHL owners out of this summer’s negotiations on the MOU extension to the CBA. The owners unanimously endorse it and it’s believed some did so solely on the commissioner’s recommendation. Having read the MOU after its ratification, some owners aren’t happy with it.

It could cost each team $150 million in operating costs for this season. Some owners have apparently told Bettman they would be better off financially by not playing. The players, meanwhile, aren’t happy with the league’s requests to lower their salaries from the agreed-upon 72 percent for this season to 55 percent.

McGran believes the players will ultimately bend because the CBA allows the league to suspend a season based on circumstances beyond its control. It’s in the financial best interest of the players to play.

SPECTOR’S NOTE: Under the CBA, the players are entitled to no more than 50 percent of hockey-related revenue. Thus, it would make sense for the players to give back now to avoid paying back more down the road.

The New York Post’s Larry Brooks last week argued the adoption of annual escrow caps coupled with unlinking the cap from actual HRR ended the assurance of a 50-50 split. That’s likely coming from the PA given Brooks’ sources within the union. I doubt that’s going to fly with the NHL owners.

The consensus among pundits is the players will have to agree to Bettman’s requests but the league will have to include a sweetener to make it enticing to the players. Plenty of suggestions have been bandied about but paying back the deferred salary with interest appears the best option. We’ll see what transpires in the coming weeks.

SPECTOR’S NOTE: The league crafted its strict test policies for this summer’s return-to-play postseason plan by observing what worked and what didn’t with other sports leagues. I daresay they’ll follow the same plan to make adjustments for a regular-season schedule.

← NHL Might Have To Bend In Stalemate With Players NHL Rumor Mill - December 1, 2020 →
We use cookies on our website to give you the most relevant experience by remembering your preferences and repeat visits. By clicking “Accept”, you consent to the use of ALL the cookies.
Do not sell my personal information.
Cookie SettingsAccept
Manage consent