​In today’s NHL rumor mill,  the reason behind Winnipeg Jets forward Jack Roslovic’s trade request, an update on teammate Patrik Laine, and what the Blackhawks might do with Jonathan Toews sidelined.

WINNIPEG FREE PRESS: Mike McIntyre reports the reason behind Winnipeg Jets forward Jack Roslovic’s trade request is an “obvious difference of opinion” when it comes to his role and ultimate value. 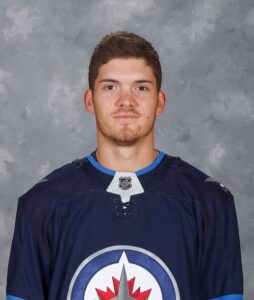 Roslovic sees himself as a natural center who should be playing on one of the Jets’ top-two lines. However, those spots are already filled with Mark Scheifele and Paul Stastny, along with Patrik Laine, Kyle Connor, Blake Wheeler and Nikolaj Ehlers on the wings. He’s instead been used in a checking-line role with Adam Lowry and Andrew Copp.

The fact Roslovic is staying put in Columbus indicates the restricted free agent is no closer to a new contract with the Jets. McIntyre said it’s no secret Roslovic wants a change of scenery. The Jets have explored trade possibilities but general manager Kevin Cheveldayoff has yet to make a move.

WINNIPEG SUN: Paul Friesen believes Roslovic has limited leverage in his contract talks coming off his entry-level deal. He also has less bargaining power than Laine and Connor last year.

SPECTOR’S NOTE: As McIntyre observes, the only way Roslovic can participate in the start of training camp on Sunday is if he’s traded to an American club. If he returns to the Jets, he’ll have to undergo a seven-day quarantine and four negative COVID tests.

Roslovic frequently surfaced in trade speculation during the offseason. It’s been suggested he could be used as trade bait to bring in a top-four defenseman but Cheveldayoff might have to package him with a draft pick or prospect to land that type of return.

Cheveldayoff could simply wait out Roslovic as he did with Jacob Trouba four years ago. However, the shortened season, the travel difficulties brought about by COVID-19 and the Jets’ glaring need for blueline depth could soon see the young forward suiting up with another NHL club.

WINNIPEG FREE PRESS: Speaking of the Jets, Mike McIntyre also reports Patrik Laine will have to address the trade request made by his agent in October with his teammates and the media. However, Cheveldoff doesn’t think it will be a distraction. The Jets GM expects the 22-year-winger will have one of the best seasons of his career.

SPECTOR’S NOTE: It might not be a distraction for the Jets, but Laine’s future will be among the hot topics in this season’s rumor mill. He’s a restricted free agent with arbitration rights next summer and is expected to seek a substantial raise over his current $6.75 million annual average value.

Cheveldayoff doesn’t have to trade Laine this season and certainly doesn’t have to rush into anything. However, unless the winger agrees to a new contract during the season, his status will remain a question that dogs the Jets throughout the coming season and into next summer.

WHAT NEXT FOR THE BLACKHAWKS?

While the Blackhawks have salary-cap space to find a center to replace Toews (especially if he’s placed on long-term injury reserve), Campbell doubts they will. If his career is in jeopardy, Campbell wonders if that might spur a complete tear-down of the roster, including seeking trade options for Patrick Kane.

THE ATHLETIC: Mark Lazerus believes the Blackhawks are going to be awful this season. He encourages the club’s fans to accept it. His suggested blueprint for this season is to play a lot of young players, lose a lot of games, get a top draft pick and turn the page to 2021-22.

SPECTOR’S NOTE: The Blackhawks really don’t have much choice. This was a roster that was already in transition before Toews, Dach and Nylander went down. Even with those three in the lineup, the Hawks’ weak goaltending and retooling blueline made reaching the playoffs a long shot this season.

Kane would fetch a strong return but I don’t expect Bowman will ask the long-time Blackhawks winger if he’ll accept a trade during this season. Nevertheless, the Blackhawks GM will probably be a seller by the Apr. 12 trade deadline. Likely trade candidates could be pending UFAs like Carl Soderberg and Mattias Janmark or players like Calvin de Haan or Connor Murphy with a year left on their contracts.

← NHL Morning Coffee Headlines - December 30, 2020 NHL Morning Coffee Headlines - December 31, 2020 →
We use cookies on our website to give you the most relevant experience by remembering your preferences and repeat visits. By clicking “Accept”, you consent to the use of ALL the cookies.
Do not sell my personal information.
Cookie SettingsAccept
Manage consent