NHL.COM: The Boston Bruins edged the Pittsburgh Penguins 3-2 on an overtime goal by Craig Smith. Brad Marchand had a goal and an assist for the Bruins, who lost winger Jake DeBrusk to a lower-body injury following an open-ice hit by Penguins captain Sidney Crosby. Jason Zucker scored and collected an assist for the Penguins.

Buffalo Sabres captain Jack Eichel’s first goal of the season held up as the game-winner in a 3-2 victory over the slumping New York Rangers, sending the latter to their fourth straight loss. Earlier in the day, the Rangers learned center Filip Chytil will be sidelined four-to-six weeks with an upper-body injury. 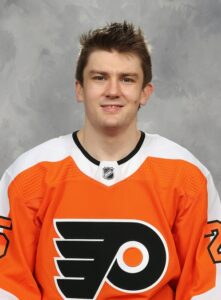 James van Riemsdyk scored two goals and Ivan Provorov had a goal and two assists to give the Philadelphia Flyers a 5-3 win over the New Jersey Devils. Claude Giroux also collected two assists for the Flyers.

The Washington Capitals nipped the New York Islanders 3-2 when Justin Schultz scored with 27 seconds remaining in the third period. John Carlson had a goal and an assist for the Capitals, who extended their points streak to seven games. Mathew Barzal scored and picked up an assist for the Islanders, who earned scorn from head coach Barry Trotz over his club’s lack of urgency. “It’s playoff mentality right now and I’m not sure we have our playoff mentality yet,” said Trotz. “And it’s pissing me off.” The Islanders were playing with Anthony Beauvillier as he was placed on injured reserve with a lower-body injury.

The Nashville Predators ended a three-game skid by downing the Chicago Blackhawks 3-2 on an overtime tally by Roman Josi. Mikael Granlund had a goal and an assist for the Predators. The Blackhawks skated without winger Alex DeBrincat and defenseman Adam Boqvist as both are expected to miss two weeks due to COVID-19 protocols.

Nikolaj Ehlers scored and set up three others as the Winnipeg Jets rallied from a 3-1 deficit to beat the Edmonton Oilers 6-4. Adam Copp also had a four-point night (two goals, two assists) and Adam Lowry had a three-point performance for the Jets. Oilers stars Connor McDavid and Leon Draisaitl each had two points while blueliner Darnell Nurse chalked up three assists.

The Los Angeles Kings picked up their third win in four games by beating the Minnesota Wild 2-1 on a third-period goal by Carl Grundstrom. Kings goalie Cal Petersen kicked out 32 shots for the win.

An overtime goal by Jason Dickinson lifted the Dallas Stars over the Detroit Red Wings 2-1. Stars defenseman John Klingberg had a goal and an assist while Joe Pavelski collected his 800th career point. The Stars have won their first three games.

The St. Louis Blues defeated former captain Alex Pietrangelo and the Vegas Golden Knights by a score of 5-4 on a shootout goal by Brayden Schenn. David Perron scored twice for the Blues while Max Pacioretty tallied a hat trick for the Golden Knights, who played without their coaching staff behind the bench after one of them tested positive for COVID-19. General manager Kelly McCrimmon took over as head coach and called up several coaches from their farm team as assistants. The Golden Knights are closing their facilities today as they determine their next steps under the league’s coronavirus protocols.

A third-period goal by Mitch Marner gave the Toronto Maple Leafs a 4-3 victory over the Calgary Flames. Marner, Auston Matthews and Morgan Rielly each had two points for the Leafs, who swept their two-game series against the Flames. Johnny Gaudreau tallied twice for the Flames. There were fireworks at the game’s end when Leafs defenseman Jake Muzzin flipped the puck at Flames winger Matthew Tkachuk, touching off a scrum that landed Muzzin a meaningless unsportsmanlike conduct penalty. The incident was likely tied to Tkachuk injuring Leafs backup goalie Jack Campbell in their previous game, leaving Campbell sidelined “for weeks”.

The Colorado Avalanche rolled to a 7-3 beat down of the San Jose Sharks. Brandon Sand scored twice, Cale Makar picked up three assists and Mikko Rantanen extended his goal-scoring streak to six games. The Sharks, meanwhile, are hoping to ready soon to their home arena after the state of California lifted its regional stay-at-home order that had been in place since Dec. 3.

John Gibson turned in a 31-save shutout and Danton Heinen scored the only goal as the Anaheim Ducks blanked the Arizona Coyotes 1-0.

← Bergevin's Offseason Roster Moves Have Canadiens Flying NHL Rumor Mill - January 27, 2021 →
We use cookies on our website to give you the most relevant experience by remembering your preferences and repeat visits. By clicking “Accept”, you consent to the use of ALL the cookies.
Do not sell my personal information.
Cookie SettingsAccept
Manage consent