NHL.COM: Connor McDavid scored twice to lead the Edmonton Oilers to a 2-1 win over the Winnipeg Jets. The Oilers have the same number of points (40) as the first-place Toronto Maple Leafs in the Scotia North Division but the latter hold three games in hand. McDavid (58 points) extended his points streak to eight games and leads the NHL scoring race by nine points over teammate Leon Draisaitl.

SPECTOR’S NOTE: McDavid is on pace for 98 points in 56 games this season. 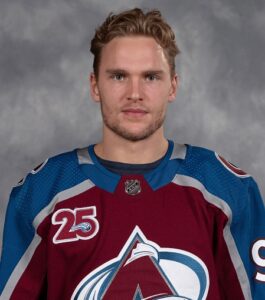 Colorado Avalanche winger Mikko Rantanen scored twice and added two assists in a 5-1 victory over the Minnesota Wild. Nathan MacKinnon and Gabriel Landeskog each had a goal and two assists as Colorado peppered Wild goaltender Cam Talbot with 55 shots. Avs defensemen Cale Makar and Bo Byram returned from upper-body injuries that had sidelined each from multiple games. Wild defenseman Matt Dumba left the game in the second period with a lower-body injury. The Avalanche (38 points) moves one point up on the Wild into second place in the Honda West Division.

A hat trick by Robby Fabbri enabled the Detroit Red Wings to hold off the Dallas Stars 3-2. It was a costly victory for the Wings as goalie Jonathan Bernier left the game in the second period with an apparent injury to his right leg. An update is expected on his condition today.

The New Jersey Devils held off the Pittsburgh Penguins 3-2 thanks to goaltender Scott Wedgewood’s 40-save performance. Devils forward Jack Hughes had a goal and an assist. Wedgewood got the call after starter Mackenzie Blackwood suffered an upper-body injury during warmups. No update was provided for his status. Earlier in the day, the Penguins placed forwards Evgeni Malkin and Teddy Blueger (undisclosed) on injured reserve. The Pens sit in third place in the MassMutual East Division with 37 points.

A new head coach didn’t change the Buffalo Sabres fortunes as they dropped a 4-1 decision to the Boston Bruins in their first game with Don Granato behind the bench. The Sabres fall to 0-11-2 in their last 13 games. David Krejci collected three assists for the Bruins, who sit one point behind the Penguins in the East Division.

The Philadelphia Flyers (33 points) moved to within three points of the Bruins by edging the New York Islanders 4-3. The Flyers blew a 3-0 lead but got the win on Oskar Lindblom’s second goal of the game late in the third period. Travis Konecny had three assists for the Flyers while Isles defenseman Nick Leddy had three helpers. Before the game, the Flyers announced defenseman Robert Hagg would be sidelined two-to-four weeks with a shoulder injury. The Islanders (42 points) remain in second place in the East.

An overtime goal by Seth Jones lifted the Columbus Blue Jackets over the Carolina Hurricanes 3-2. It was Jones’ second goal of the game. Carolina center Sebastian Aho countered with two goals. The Hurricanes remain in third place in the Discover Central Division with 42 points while the Jackets (31 points) climbed to within two points of the fourth-overall Chicago Blackhawks.

Speaking of the Blackhawks, they dropped a 4-2 decision to the Tampa Bay Lightning. Bolts goalie Andrei Vasilevskiy made 19 saves for his 10th straight victory while Victor Hedman had a goal and an assist. The Lightning (44 points) opened a two-point lead over the Hurricanes and Florida Panthers for first place in the Central Division. Chicago center Dylan Strome scored in his first game since being sidelined a month ago by a concussion. The Blackhawks have dropped three straight.

The Nashville Predators got two goals from Calle Jarnkrok and a 40-save effort from Juuse Saros to edge the Panthers 2-1. Jonathan Huberdeau scored for the Panthers, who remain in second place in the Central.

Anaheim Ducks rookies Jamie Drysdale and Trevor Zegras each scored their first NHL goals in a 3-2 win over the Arizona Coyotes. Drysdale finished the game with two points while Adam Henrique tallied the game-winner. Clayton Keller and Conor Garland replied for the Coyotes.

SPECTOR’S NOTE: Drysdale and Zegras offer what could be a promising look at the Ducks’ future depending on what moves management makes to rebuild the roster.

SPECTOR’S NOTE: That news won’t silence Andersen’s critics but it explains his struggles since returning to action from the same injury that sidelined him for two weeks in the second half of February.

← Goaltending Becomes The Maple Leafs' Weakest Link NHL Rumor Mill - March 19, 2021 →
We use cookies on our website to give you the most relevant experience by remembering your preferences and repeat visits. By clicking “Accept”, you consent to the use of ALL the cookies.
Do not sell my personal information.
Cookie SettingsAccept
Manage consent