​Panthers defenseman Aaron Ekblad could be sidelined for an extensive period, the Predators surge into a playoff spot, the regular-season schedule is extended to May 11, and more in today’s NHL morning coffee headlines.

NHL.COM: A serious leg injury suffered by Florida Panthers defenseman Aaron Ekblad overshadowed his club’s 4-1 victory over the Dallas Stars. Ekblad fell awkwardly following a routine play along the corner boards with Stars blueliner Esa Lindell and was carried off the ice on a stretcher. Florida coach Joel Quenneville indicates Ekblad could be sidelined for an “extensive time.” Jonathan Huberdeau scored twice for the Panthers (48 points) as they sit two points behind the first-place Tampa Bay Lightning in the Discover Central Division. 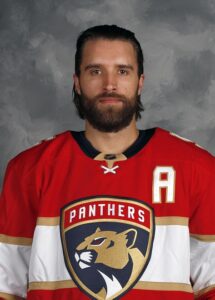 SPECTOR’S NOTE: Ekblad was clutching his lower-left leg after crumpling to the ice. His absence will leave a big gap on the Panthers’ blueline at a time when they’re jockeying with the Lightning and Carolina Hurricanes for the top spot in their division. He’s their top defenseman, sitting fifth among their scoring leaders with 11 goals and 22 points.

Roman Josi’s third-period goal lifted the Nashville Predators over the Chicago Blackhawks 3-2. Alex DeBrincat scored both of Chicago’s goals. The Predators have won five straight and moved past the Blackhawks into fourth place in the Central Division. Both clubs have 37 points but the Preds hold a game in hand.

SPECTOR’S NOTE: The higher Nashville rises in their division the more reluctant general manager David Poile could be to become a seller at the April 12 trade deadline. Predators defenseman Mattias Ekholm is considered the top trade candidate but he could be unavailable if his club stays in playoff contention leading up to deadline day.

SPECTOR’S NOTE: Ovechkin now has 18 goals on the season and sits three behind Toronto’s Auston Matthews and his league-leading 22 tallies. The Capitals captain is now seven goals behind Marcel Dionne, who sits fifth on the all-time goal-scoring list.

An overtime goal by Josh Manson enabled the Anaheim Ducks to upset the St. Louis Blues 3-2. Anthony Stolarz made 38 saves for the Ducks, who lost winger Rickard Rakell to an upper-body injury during a collision with Blues forward Kyle Clifford in the second period. Blues winger Mike Hoffman was a healthy scratch after scoring just two goals in his last 17 games. The Blues sit fourth in the West Division with 38 points, just one ahead of the Arizona Coyotes.

SPECTOR’S NOTE: The Blues have dropped nine of their last 11 games. They scored three-or-more goals only three times during that stretch. GM Doug Armstrong is rumored to be in the market for a scorer but finding one who fits within his limited cap space won’t be easy. Hoffman’s struggles are part of the problem and damaging to his value as a free agent this summer.

Three third-period goals carried the Detroit Red Wings to a 4-1 upset of the Columbus Blue Jackets. Wings goalie Calvin Pickard made 16 saves for his second win in as many days. The loss leaves the Jackets with 34 points, three back of the Predators and Blackhawks in the Central.

SPECTOR’S NOTE: Jackets’ winger Patrik Laine has really struggled to score over the past month. In 16 games since Feb. 25, he’s tallied just one goal and three assists.

A 40-save shutout by Mackenzie Blackwood gave the New Jersey Devils a 1-0 win over the Boston Bruins. Kyle Palmieri tallied the only goal. The loss leaves the Bruins (39 points) seven points behind the third-place Pittsburgh Penguins and three up on the fifth-place Philadelphia Flyers in the East Division.

The NHL announced the extension of the regular season to May 11 to accommodate the rescheduling of postponed games.

TRIBLIVE.COM: Pittsburgh Penguins forwards Mark Jankowski and Brandon Tanev came off the NHL’s COVID-19 protocol list one day after being placed on the list.

THE DENVER POST: Colorado Avalanche defenseman Bo Byram is in concussion protocol since becoming injured during Thursday’s game against the Vegas Golden Knights. He remains day-to-day but head coach Jared Bednar didn’t rule out moving him to week-to-week.

← Sunday NHL Rumor Roundup - March 28, 2021 NHL Rumor Mill - March 29, 2021 →
We use cookies on our website to give you the most relevant experience by remembering your preferences and repeat visits. By clicking “Accept”, you consent to the use of ALL the cookies.
Do not sell my personal information.
Cookie SettingsAccept
Manage consent