​Brad Marchand and Alex Wennberg each tally a hat trick, the Stars and Sharks keep their playoff hopes alive and more Canucks added to the COVID-19 protocol list. Details and more in the NHL morning coffee headlines.

NHL.COM: Brad Marchand tallied a hat trick and David Pastrnak scored twice to lead the Boston Bruins over the Pittsburgh Penguins 7-5. Pittsburgh forwards Sidney Crosby and Jake Guentzel each had a goal and two assists. With the win, the Bruins (43 points) opened a four-point lead over the Philadelphia Flyers for fourth place in the MassMutual East Division. The Penguins (50 points) are seven points ahead of the Bruins in third, sitting two behind the second-place New York Islanders. The Bruins also learned defenseman Brandon Carlo is listed as week-to-week with an upper-body injury suffered on Thursday against the Penguins. 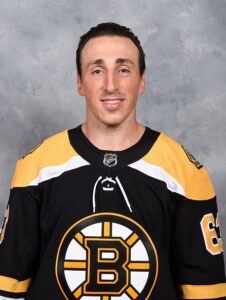 Mathew Barzal scored the winner in a shootout as the Islanders nipped the Flyers 3-2. Anthony Beauvillier scored twice for the Isles but Claude Giroux countered with two to force extra time. The Islanders are tied with the Washington Capitals with 52 points but the latter holds first place in the East with a game in hand. Isles forward Ross Johnston left the game following a first-period fight with Flyers defenseman Samuel Morin and didn’t return.

The Buffalo Sabres picked up their second win in three games by edging the New York Rangers 3-2 in a shootout. Tage Thompson potted the winner for the Sabres. Artemi Panarin scored twice for the Rangers, who are tied with the Flyers with 39 points but the latter holds fifth place in the East Division with a game in hand.

The Tampa Bay Lightning picked up their 17th straight home victory over the Detroit Red Wings by edging the latter 2-1. Andrei Vasilevskiy made 25 saves while Ross Colton and Brayden Point tallied for the Lightning (54 points), who are tied with the Florida Panthers but hold first place in the Discover Central Division with a game in hand.

A hat trick by Alex Wennberg and a 44-save effort by Sergei Bobrovsky gave the Panthers a 5-2 win over the Columbus Blue Jackets. The struggling Jackets sit seventh in the Central with 36 points. Jackets forward Jack Roslovic was a healthy scratch in his contest with just two points in his last six outings.

A 41-save shutout by Juuse Saros carried the Nashville Predators to a 3-0 victory over the Chicago Blackhawks. Eeli Tolvanen’s 10th goal of the season was also the winning goal as the Predators (41 points) have won seven of their last eight contests, opening a two-point lead over the Blackhawks for fourth in the Central Division.

The Dallas Stars kept their playoff hopes alive with a 3-2 win over the Carolina Hurricanes. Tanner Kero broke a 2-2 tie while Jake Oettinger kicked out 41 shots for the Stars (36 points), who sit five points behind the fourth-place Predators in the Central Division. The Hurricanes (51 points) remain three points behind the Lightning and Florida Panthers in the Central.

Cale Makar’s goal within the final minute of regulation lifted the Colorado Avalanche over the St. Louis Blues 2-1. Nathan MacKinnon also scored for the Avs (54 points), who won their fourth straight and sit four points up on the Vegas Golden Knights in the Honda West Division. The Blues (38 points) remain one behind the fourth-place Arizona Coyotes.

Third-period goals by Kirill Kaprizov and Joel Eriksson Ek 55 seconds apart rallied the Minnesota Wild over the Vegas Golden Knights 2-1. With 48 points, the Wild are just two back of the second-place Golden Knights in the West Division.

A third-period goal by Dylan Gambrell gave the San Jose Sharks a 3-2 win over the Los Angeles Kings. Evander Kane and Kevin Labanc each had a goal and an assist as the surging Sharks moved into a tie with the Blues, though the latter holds fifth in the West Division on the basis of regulation plus overtime wins.

The Ottawa Senators got two goals from Evgenii Dadonov and 35 saves from Anton Forsberg to beat the Montreal Canadiens 6-3, snapping the latter’s three-game win streak. Artem Anisimov also collected three assists for the Senators while Josh Anderson tallied twice for the Canadiens, who remain in fourth place in the Scotia North Division with 41 points. Habs winger Tyler Toffoli also scored in his return to the lineup after missing three games with a lower-body injury. The Senators played without Colin White, who’s day-to-day with an upper-body injury.

Hawryluk is a positive case, marking the second time in a year he’s tested positive for COVID-19. Research shows the P.1 variant is capable of reinfecting people who previously suffered from other strains of the coronavirus.

TSN: Pierre LeBrun reports the NHL is proceeding on the assumption the entire Canucks team will likely test positive. It’s built into the league’s planning going forward, similar to what happened at the start of the season with the Dallas Stars. This is a variant of the coronavirus the league hasn’t seen before.

The Canucks shutdown will last longer than anticipated. They will not be playing next week. The league has discussed future dates with the club but those won’t be announced for a while.

North Division games will likely be scheduled past May 11, using the week of May 10-14 as a buffer. The three US divisions could still start their playoffs on May 11. The league also remains confident it can complete the 56-game schedule.

SPORTSNET: Elliotte Friedman reports there are discussions about holding the 2021 Stanley Cup playoffs in a bubble environment similar to last year, though it’s not something anyone wants at this point. Much will depend upon how things evolve between now and then.

Meanwhile, the NHL has issued a memo to its 31 teams reiterating the rules, regulations and best practices for mitigating the spread of COVID-19.

SPECTOR’S NOTE: Previous outbreaks among several clubs have put a strain on the schedule, with most teams facing a grueling timetable over the next six weeks making up games postponed earlier in the season. That’s going to take a physical toll on the players over the next month.

The league wants to avoid moving the regular season and playoff schedules forward because they don’t want to push the postseason any deeper into the summer than it already is. They also don’t to risk the Stanley Cup Final being staged at the same time as the 2021 Tokyo Olympics, which are slated to begin on July 23.

Teams want to avoid a playoff bubble because it will adversely affect their already depleted revenue for this season. The players don’t want it because they’ll be separated for weeks from their families. Nevertheless, they could have little choice if the variants of the coronavirus lead to a significant increase in infections among the North American population.

← NHL Goaltenders and Early Trade Deadline Odds Sunday NHL Rumor Roundup - April 4, 2021 →
We use cookies on our website to give you the most relevant experience by remembering your preferences and repeat visits. By clicking “Accept”, you consent to the use of ALL the cookies.
Do not sell my personal information.
Cookie SettingsAccept
Manage consent