The Canadiens win over the Leafs overshadowed by Tavares injury, the Panthers rally back against the Lightning, the Penguins and Golden Knights take 2-1 leads in their respective series. Details and more in today’s NHL morning coffee headlines.

NHL.COM: A shorthanded goal by Paul Byron late in the third period lifted the Montreal Canadiens to a 2-1 victory over the Toronto Maple Leafs in Game 1 of their much-anticipated first-round series. Canadiens goalie Carey Price made 35 stops while Josh Anderson opened the scoring. William Nylander tallied for the Leafs. 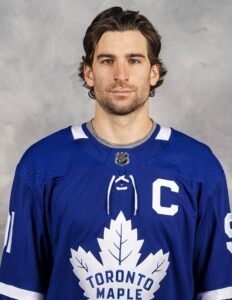 The Habs win was overshadowed by a scary injury to Leafs captain John Tavares in the first period. Checked to the ice by Ben Chiarot, Tavares was accidentally struck in the head by the knee of Corey Perry as the latter attempted to avoid the fallen Leaf. He was stretchered from the ice and spent the night in hospital, where he was reportedly conscious, communicative, and passed all tests.

SPECTOR’S NOTE: Tavares’ status for Game 2 on Saturday is unclear. Here’s hoping he makes a full recovery and returns to this series.

While Perry’s collision with Tavares was accidental, Leafs winger Nick Foligno felt the Habs winger had to answer for his “transgression” by fighting him on the next faceoff. Had Perry deliberately attempt to injury Tavares it would’ve been justified. That wasn’t the case in this instance. Even former NHL enforcer Matthew Barnaby questioned Foligno’s actions.

The Canadiens didn’t emerge entirely unscathed from this game. Center Jake Evans left the game with an undisclosed injury and didn’t return.

The Florida Panthers clawed their way back into their series with the Tampa Bay Lightning with a 6-5 overtime victory. Ryan Lomberg tallied the game-winner as his club overcame a 5-3 deficit on third-period goals by Patric Hornqvist and Gustav Forsling. Jonathan Huberdeau collected three assists for the Panthers as did the Lightning’s Victor Hedman. The Lightning holds a 2-1 series lead with Game 4 set for Saturday afternoon.

SPECTOR’S NOTE: Panthers defenseman Keith Yandle was a healthy scratch for the first time since 2009. However, this doesn’t affect his consecutive-games streak of 922 as only regular-season games are counted.

SPECTOR’S NOTE: This was a wild contest that saw the Islanders overcome 1-0, 3-1 and 4-3 deficits before Tanev put the game away. A wild scrum near the Penguins net in the third period resulted in nine roughing minors.

The Vegas Golden Knights overcame a 2-0 deficit to drop the Minnesota Wild 5-2 and take a 2-1 lead in their first-round series. Mark Stone led the way with two goals for the Golden Knights. Game 4 is on Saturday night.

SPECTOR’S NOTE: The Wild were the better team in the first period. They appeared to take a 3-0 lead on a goal by Joel Eriksson Ek but that was overturned as offside on a coach’s challenge. Had that goal stood, perhaps it would’ve changed the outcome of this game. Instead, the Golden Knights rallied with a strong effort over the remaining two periods.

THE DENVER POST: Colorado Avalanche center Nazem Kadri faces a suspension for his hit to the head of St. Louis Blues defenseman Justin Faulk in Game 2 of their first-round series. Kadri was offered an in-person hearing with the league’s department of player safety.

SPECTOR’S NOTE: Kadri has two prior postseason suspensions. He could be gone for at least the remainder of this series. His punishment is expected to be handed down today.

NBC SPORTS WASHINGTON: Capitals center Evgeny Kuznetsov confirmed he tested positive for COVID-19 for a second time earlier this month. He returned to action for Game 3 of his club’s series against the Boston Bruins. It was his first game since May 1. He had also tested positive in January.

THE DETROIT NEWS: Red Wings forward Tyler Bertuzzi said he’s feeling well following back surgery on April 30. He was limited to just nine games this season and hopes to be ready for training camp in September.

THE PROVINCE: The Vancouver Canucks are reportedly close to signing head coach Travis Green to a new contract. His current deal expires at the end of this season. Meanwhile, Canucks center Elias Pettersson said his season was ended on March 1 by a hyperextended wrist. He said it’s almost 100 percent healed and doesn’t expect any issues for next season.

OTTAWA SUN: Senators owner Eugene Melnyk said he’d like to build a new arena in Kanata to replace the Canadian Tire Centre. However, he also hinted at moving across the Gatineau River into Quebec, though the team would still be within the Ottawa region.

← NHL Playoffs: Vegas Golden Knights vs Minnesota Wild Game 3 NHL Playoffs: Canadiens Draw First Blood Against Leafs →
We use cookies on our website to give you the most relevant experience by remembering your preferences and repeat visits. By clicking “Accept”, you consent to the use of ALL the cookies.
Do not sell my personal information.
Cookie SettingsAccept
Manage consent