NHL.COM: Edmonton Oilers captain Connor McDavid collected two assists in a 4-1 victory over the Vancouver Canucks. McDavid has a league-leading 93 points on the season with five games remaining in the schedule. Leon Draisaitl scored twice for the Oilers, who sit in second place in the Scotia North Division with 66 points. 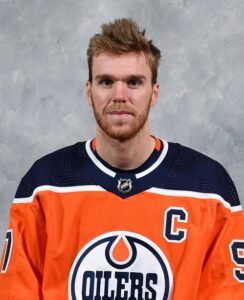 SPECTOR’S NOTE: McDavid’s chances of reaching 100 points in 56 games are improving. The Oilers play the Canucks three more times and the Montreal Canadiens twice. The Habs did a good job containing McDavid through their first five games, limiting the Oilers’ captain to just two assists in those contests. However, McDavid lit up the Canadiens for six points during their last two meetings.

The Carolina Hurricanes overcame a 2-0 deficit to down the Chicago Blackhawks 6-3. Andrei Svechnikov and Teuvo Teravainen each scored two goals for Carolina while Alex DeBrincat tallied twice for Chicago. Blackhawks center Kirby Dach missed the game due to scar tissue aggravation in his right wrist.

SPECTOR’S NOTE: The Hurricanes (79 points) moved closer to winning their first Presidents’ Trophy, holding a four-point lead over the Florida Panthers with a game in hand for the top spot in the Discover Central and the overall standings.

Pittsburgh Penguins captain Sidney Crosby scored twice and collected an assist in a 7-3 drubbing of the Philadelphia Flyers. Jake Guentzel had a goal and two assists for the Penguins, who regained first place in the MassMutual East Division with 73 points.

The New Jersey Devils nipped the Boston Bruins 4-3 in overtime. Pavel Zacha scored twice, including the game-winner. With 69 points, Boston sits two behind the second-place Washington Capitals. Bruins defenseman Brandon Carlo returned to action after being sidelined a month with an oblique muscle injury.

A 45-save performance by minor-league call-up Michael Houser gave the Buffalo Sabres a 4-3 shootout win over the New York Islanders. Anders Bjork scored two goals and regulation and the winning goal in the shootout. Houser has two wins in as many games for the Sabres. The Islanders sit one point behind the Bruins.

NEW YORK POST: Wilson also slammed Rangers winger Artemi Panarin to the ice but received no supplemental discipline for that incident. Panarin suffered a lower-body injury and will miss the remaining three games of the Rangers’ season. Following the announcement of Wilson’s fine, the Rangers released a statement condemning the mild punishment. They considered it a dereliction of duty by NHL head of player safety, George Parros, declaring him unfit to continue in his current role.

SPECTOR’S NOTE: Wilson’s slap on the wrist sparked outrage on social media and widespread condemnation among many NHL pundits. However, the Rangers’ public statement is a shot across the bow.

Team owner James Dolan is no fan of league commissioner Gary Bettman dating back to the latter’s smackdown of Dolan’s 2007 attempt to set up a Rangers website outside of the NHL.com realm. The league will likely fine the Rangers as Bettman won’t tolerate any public challenge to his authority. I doubt this leads to any major changes in the player safety department.

As for Wilson, he’s expected to be in the Capitals lineup tonight against the Rangers.

SPORTSNET: Milan Lucic has agreed to waive his no-movement clause to allow the Calgary Flames to leave him unprotected in this summer’s NHL expansion draft. The move allows the Flames the opportunity to protect a player like Mikael Backlund, Dillon Dube or Andrew Mangiapane.

SPECTOR’S NOTE: An unselfish act by Lucic to give Flames general manager Brad Treliving some flexibility in the expansion draft. However, it’s unlikely the Seattle Kraken will claim him. The 32-year-old winger’s best seasons are behind him plus he carries a $5.25 million cap hit for the next two seasons.

NBC SPORTS WASHINGTON: Capitals center Evgeny Kuznetsov was added to the NHL’s COVID-19 protocol list for the second time this season. Kuznetsov and teammate Ilya Samsonov didn’t dress for Monday’s game against the Rangers as a disciplinary measure for missing a team function. It’s uncertain if he tested positive or broke protocol.

THE ATHLETIC: San Jose Sharks winger Evander Kane has been sued for $15 million by a lender for punitive damages stemming from a $1.5 million loan. Kane is in the midst of a tangle Chapter 7 bankruptcy case.

SPECTOR’S NOTE: Kane’s financial issues haven’t affected his play on the ice. He’s the Sharks scoring leader with 22 goals and 45 points in 52 games.

OTTAWA SUN: Senators defensemen Thomas Chabot and Josh Brown are sidelined by injuries that will keep them out of the lineup for the club’s remaining four games of the season.

THE PROVINCE: The Vancouver Canucks are moving their AHL affiliate from Utica, NY to Abbotsford, BC, beginning in 2021-22.

← What Next For the Los Angeles Kings? NHL Rumor Mill - May 5, 2021 →
We use cookies on our website to give you the most relevant experience by remembering your preferences and repeat visits. By clicking “Accept”, you consent to the use of ALL the cookies.
Do not sell my personal information.
Cookie SettingsAccept
Manage consent