In today’s NHL rumor mill, Drew Doughty calls upon Kings management to add experienced depth plus a look ahead at possible offseason moves by the Senators and Canucks.

THE SCORE: Josh Gold-Smith cites Drew Doughty calling upon Los Angeles Kings management to bring in more experience to their rebuilding roster. The 31-year-old defenseman feels he and veteran teammates Anze Kopitar, Jonathan Quick and Dustin Brown are running out of time. 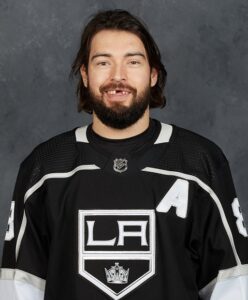 Doughty acknowledged the club’s been rebuilding but feels they have the salary-cap space to make some big moves. “There’s no point in just waiting for these prospects to develop when you’ve got guys in their prime, hungry to win, and sick of losing,” he said. When asked if he’d be happy if big moves aren’t made, Doughty simply replied, “No.”

SPECTOR’S NOTE: Kings general manager Rob Blake has patiently built up his roster with promising youngsters but his veteran core wants to return to playoff contention and a shot at winning the Stanley Cup again.

Doughty has six more seasons left on his contract with an annual average value of $11 million. Kopitar has three more at $10 million annually, Quick has two years at $5.8 million and Brown one year at $5.875 million. Blake could trade one or two of those players but their age or hefty contracts would be difficult to move.

Cap Friendly shows the Kings with over $20 million in cap space for 2021-22 with all their core players under contract. There’s room to make a big offseason move to accelerate the rebuild. That’s why the Kings have been linked to Buffalo Sabres center Jack Eichel in recent trade rumors.

We’ll have to wait and see what Blake has in store for his roster this summer. If he sticks with his current plan, however, he’ll have an unhappy No. 1 defenseman on his hands. And that will raise questions about Doughty’s future in Los Angeles.

THE ATHLETIC: Thomas Drance included reallocating salary-cap space among his list of offseason priorities for the Vancouver Canucks. Once restricted free agents Elias Pettersson and Quinn Hughes are re-signed, there won’t be enough cap room to rebuild the blueline, upgrade their bottom-six forwards and add a top-six winger.

They could get some relief if the Seattle Kraken select goalie Braden Holtby (4.3 million) in this summer’s expansion draft. A contract buyout or two is possible. Drance also proposed bundling a future asset to move an additional contract or attempt to move Micheal Ferland’s contract to a cap-strapped team.

SPECTOR’S NOTE: The Canucks have over $65 million tied up in 15 players. Most of that will be used up signing Pettersson and Hughes.

GM Jim Benning could be squeezed by the Kraken for a draft pick to take Holtby off his hands. Ferland and Jay Beagle could start next season on long-term injury reserve. However, it would be less complicated if one or both could be shipped to teams better equipped than the Canucks to carry those contracts. Those moves also mean including a draft pick, prospect or young NHL-ready player into the deal.

Benning attempted to trade disappointing winger Jake Virtanen this season but couldn’t find any takers. His $3.4 million in actual salary for next season combined with his recent off-ice issues could give Benning little choice but to buy out Virtanen.

THE ATHLETIC: Ian Mendes includes the acquisition of a top-four defenseman among his suggested offseason priorities for the Ottawa Senators. He feels they need a veteran blueliner who can log over 20 minutes per game.

Mendes proposed targeting teams with expansion draft protection issues or those with salary-cap issues in the trade market. They could also go the free-agent route.

OTTAWA SUN: Bruce Garrioch reports the Senators want to add another center and perhaps a top-four defenseman. GM Pierre Dorion could attempt to address those needs from within but could shop around first.

SPECTOR’S NOTE: The Senators have over $53 million invested in 17 players with Brady Tkachuk and Drake Batherson as their notable free agents. They’ll have plenty of salary cap room once those two are re-signed, but that depends on how close to the $81.5 million cap owner Eugene Melnyk is willing to spend.

← NHL Morning Coffee Headlines - May 15, 2021 Several NHL Teams Going With Unproven Playoff Goalies →
We use cookies on our website to give you the most relevant experience by remembering your preferences and repeat visits. By clicking “Accept”, you consent to the use of ALL the cookies.
Do not sell my personal information.
Cookie SettingsAccept
Manage consent