Check out the latest on the Blue Jackets, Canucks, Hurricanes, and Coyotes in today’s NHL rumor mill.

THE ATHLETIC: Aaron Portzline recently reported on Columbus Blue Jackets defenseman Zach Werenski’s recent decision to change agents. He has a year remaining on his contract but changing agents suggests he wants to open contract discussions this summer. 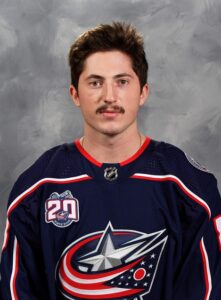 SPECTOR’S NOTE: That would coincide with the contract talks expected this summer for Seth Jones, Werenski’s defense partner. Jones is slated to become an unrestricted free agent next summer. Werenski, meanwhile, will become a restricted free agent with arbitration rights who’ll cost $7 million just to qualify his rights. The Jackets ownership will have to dig deep for the big bucks to keep their top-two defensemen in Columbus.

Portzline also believes Jackets general manager Jarmo Kekalainen must evaluate his current centermen before going shopping for one via trade or free agency. Max Domi, Jack Roslovic, and Alexandre Texier struggled in that position this season. Portzline doesn’t see Kekalainen adding three centers this summer but wonders how many the GM feels he needs.

SPECTOR’S NOTE: As Portzline pointed out, Kekalainen might be lucky to pry away a prominent center from another team. I expect he’ll try to add one experienced center and hope for improvement from Domi, Roslovic and Texier next season, perhaps with a new coach behind the bench if John Tortorella doesn’t return.

TSN’s Darren Dreger believes Kekalainen will try his best to bring in a top-line center for winger Patrik Laine next season. That would be a costly undertaking during the best of seasons. It could prove more difficult under a flattened salary cap.

Boston’s David Krejci and Edmonton’s Ryan Nugent-Hopkins are the best centers in this summer’s UFA market. At 35, Krejci is at the tail end of his career and best suited for second-line duty. Nugent-Hopkins is a versatile two-way forward but I don’t see him as a first-line center.

Cap Friendly shows the Jackets have $56.5 million invested in 16 players for 2021-22. Kekalainen could target a cap-strapped club trying to shed salary. However, re-signing Laine (an RFA with arbitration rights this summer) will bite deeply into that cap space, perhaps as much as $8 million. It’ll take $7.5 million to qualify his right.

TSN: Pierre LeBrun reports the Vancouver Canucks haven’t put a new offer on the table for head coach Travis Green. He wants to stay and the Canucks want to keep him. Green is earning $1 million per season, which is in the lower third among NHL head coaches. LeBrun speculates it could take around $2.5 million to get it done.

Darren Dreger reports the Carolina Hurricanes hope to get head coach Rod Brind’Amour under contract before the playoffs begin. Management seems confident it will get a deal done soon.

SPECTOR’S NOTE: Brind’Amour has turned the Hurricanes into a Stanley Cup contender in just three seasons. They’re on the verge of winning their first-ever Presidents’ Trophy.

Dreger also reports Arizona Coyotes bench boss Rick Tocchet could be moving on at the end of this season. His sources indicated Tocchet is more likely to test the open market this summer.

AFTONBLADET: Coyotes defenseman Niklas Hjalmarsson could return to HV71 Jonkoping of the Swedish Hockey League after 14 NHL seasons. Hjalmarsson, 33, is slated to become an unrestricted free agent this summer. He spent three seasons with HV71 before starting his NHL career with the Chicago Blackhawks in 2007-08.

SPECTOR’S NOTE: The report doesn’t rule out Hjalmarsson staying in the NHL if he gets an offer he can’t resist or if the tax situation makes it difficult for him to play in Sweden this autumn.

← NHL Morning Coffee Headlines - May 7, 2021 What Next For the San Jose Sharks? →
We use cookies on our website to give you the most relevant experience by remembering your preferences and repeat visits. By clicking “Accept”, you consent to the use of ALL the cookies.
Do not sell my personal information.
Cookie SettingsAccept
Manage consent