The Bruins face some free-agent decisions, some recent speculation linking the Flyers to Seth Jones, and the latest on the Sharks in today’s NHL rumor mill.

WHAT NEXT FOR THE BRUINS?

ESPN.COM: Emily Kaplan reports the Boston Bruins must decide on the futures of goaltender Tuukka Rask and center David Krejci. Rask is a polarizing figure among Bruins fans but remains among the NHL’s best goaltenders. It’s unclear what the 34-year-old Rask intends to do but the emergence of Jeremy Swayman makes the club feel better about its’ future plans. 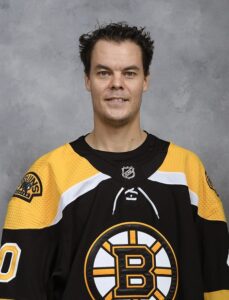 Has Tuukka Rask played his final game with the Boston Bruins? (NHL Images)

Krejci remains a reliable center at age 35 but not at his current $7.25 million cap hit. The chemistry he developed with Taylor Hall and Craig Smith could lead management to try and bring him back at a reduced rate.

Kaplan also believes the Bruins should attempt to re-sign trade-deadline acquisitions Taylor Hall and Mike Reilly. Hall’s been campaigning to remain a Bruins since his arrival in Boston.

SPECTOR’S NOTE: The Bruins could bring back Rask if he’ll accept a short-term deal for perhaps a little less than his current $7 million cap hit. He’ll also have to share more of the goalie duties with Swayman. If not, they’ll go with Swayman and perhaps add an experienced backup as his mentor.

I can see Krejci returning at a reduced rate on a two-year deal, or perhaps a one-year, bonus-laden contract. He doesn’t seem keen to leave the only NHL team he’s played for. The club’s performance this season suggests they could have enough left for another shot at a Cup run next season, depending of course on their offseason moves. Krejci will probably want to be part of that.

The Bruins were pleased with the play of Hall and Reilly. The latter, however, will be easier to re-sign than the former. Kaplan said Hall would prefer long-term stability. If he wants that from the Bruins, he’ll likely have to accept less than market value.

Hall salvaged his reputation with a strong performance in Boston after his disastrous turn earlier this season with the Buffalo Sabres. That will make him an intriguing option for playoff contenders if he heads to free agency this summer.

COULD THE FLYERS LAND SETH JONES?

Appearing last week on SiriusXM NHL Network Radio, Friedman said he felt the Flyers could make that trade. He wondered how Jones would feel about that but wouldn’t be shocked if the blueliner ends up in Philadelphia.

THE PHILADELPHIA INQUIRER: Sam Carchidi was asked by a reader if the Flyers could acquire Jones, or Carolina Hurricanes defenseman Dougie Hamilton, or Calgary Flames winger Johnny Gaudreau.

Carchidi believes Gaudreau would help the Flyers’ offensive attack. However, he believes their top priority should be acquiring a right-shot defenseman such as Jones or Hamilton.

SPECTOR’S NOTE: Every team interested in Jones will want to know if he’ll sign a contract extension with them. If he won’t, Flyers general manager Chuck Fletcher could look elsewhere to address his right-side defense needs.

If Jones is willing to talk contract extension, Fletcher must decide how much he’s willing to spend in return and salary. Others clubs, such as the Los Angeles Kings and Chicago Blackhawks, have the cap space and tradeable assets to outbid the Flyers. We also can’t rule out teams like the Colorado Avalanche or Dallas Stars finding a creative way to acquire him.

White suggested offering up a package including a winger such as Timo Meier ($6 million cap hit) and Kevin Labanc ($4.725 million) for Marner or Nylander. The Capitals’ limited cap space could make them receptive to an offer of draft picks for Eller.

Talbot could be an option if the Wild risk losing him to the Seattle Kraken in the expansion draft or of giving up assets to the Kraken to retain him. With $11 million in salary-cap space, the Sharks could be positioned to offer Nugent-Hopkins more money on a short-term deal via free agency.

SPECTOR’S NOTE: Sharks GM Doug Wilson has a well-earned reputation for making bold moves and could do so this summer. I don’t see him prying Marner or Nylander away from the Leafs or winning a bidding war in free agency for Nugent-Hopkins. Pursuing Talbot or Eller are more reasonable options, though we don’t know if either guy will be on Wilson’s radar this summer.

← NHL Morning Coffee Headlines - June 10, 2021 NHL Morning Coffee Headlines - June 11, 2021 →
We use cookies on our website to give you the most relevant experience by remembering your preferences and repeat visits. By clicking “Accept”, you consent to the use of ALL the cookies.
Do not sell my personal information.
Cookie SettingsAccept
Manage consent