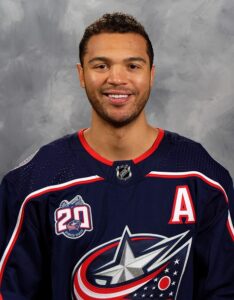 SPECTOR’S NOTE: Friedman didn’t elaborate but it’s not surprising the Flyers would look at Jones to fill their glaring need for a top-pairing, right-side blueliner. They have the assets to make a competitive pitch, but they’ll have to shed salary to squeeze in his $5.4 million cap hit for next season. Cap Friendly shows them with $13.08 in projected cap space. Carter Hart and Travis Sanheim are due for new contracts plus they need to find a suitable backup for Hart.

The Flames issued firm denials regarding a recent rumor claiming Matthew Tkachuk wanted out of Calgary. That’s different from when no one denied the leak that Seth Jones would test next summer’s free-agent market or the news the Arizona Coyotes will try to trade Oliver Ekman-Larsson or reports the Carolina Hurricanes allowed Dougie Hamilton to speak with other teams.

SPECTOR’S NOTE: There weren’t any earlier indications Tkachuk was unhappy in Calgary prior to last week’s rumor claiming he wanted out. Flames management could consider all options after missing the playoffs this season. Moving Tkachuk, however, doesn’t sound like one of them.

Things were quieter on the Jack Eichel rumor front last week. Friedman expects things to pick up once they hire a new coach. Interim coach Don Granato and Rick Tocchet are among the contenders.

SPECTOR’S NOTE: The New York Post’s Larry Brooks reports several sources said the Rangers have had preliminary talks with the Sabres and would like to look into Eichel’s medical condition. He said it’s uncertain if general manager Chris Drury is performing due diligence or has a serious interest in the Sabres’ captain. The Sabres haven’t granted permission for clubs to examine Eichel’s medical records but it’s expected they would do so if trade talks intensify.

Friedman also heard Nashville Predators winger Viktor Arvidsson could be available. The hard-working winger has three years remaining on his contract with an annual average value of $4.25 million.

SPECTOR’S NOTE: A healthy Arvidsson would attract considerable interest. However, he’s been hampered by injuries the past three seasons, which would explain why the Predators could be willing to move him.

It sounds like Wayne Simmonds could be returning for another season with the Toronto Maple Leafs.

SPECTOR’S NOTE: Simmonds completed a one-year, $1.5 million contract with the Leafs. Given their limited cap space, my guess is they’ll try to sign him to a one-year deal worth under $1 million. They’ll also probably wait until after the expansion draft to formally announce it so they don’t have to place him on their protected list.

**UPDATE: TSN reports the Leafs signed Simmonds to a two-year extension with an annual average value of $900K.

Friedman thinks some trade discussions are stalled over worries about expansion draft protection. There’s also concern the Seattle Kraken could draft exposed players and then flip them elsewhere. For example, they could select someone like Matt Dumba or Mark Giordano and then entertain bids and potentially absorb part of their salary. Friedman feels either player would make sense for the Edmonton Oilers.

SPECTOR’S NOTE: Kraken GM Ron Francis will try to use the same playbook as the Vegas Golden Knights during their expansion draft. He’s going to look at side deals if it lands a return that provides long-term benefits.

SPECTOR’S NOTE: The potential departures of Martinook and Foegele could be in anticipation of re-signing pending UFA defenseman Dougie Hamilton and restricted free agents Andrei Svechnikov and Alex Nedeljkovic. The Hurricanes have over $29 million in projected cap space but new contracts for those three will eat up a big chunk.

The New Jersey Devils could consider moving their first-round pick (fourth overall) in this year’s draft for a good young defenseman.

← NHL Morning Coffee Headlines - June 29, 2021 Nugent-Hopkins Signs Eight-Year Extension With Oilers →
We use cookies on our website to give you the most relevant experience by remembering your preferences and repeat visits. By clicking “Accept”, you consent to the use of ALL the cookies.
Do not sell my personal information.
Cookie SettingsAccept
Manage consent