The Philadelphia Flyers acquired defenseman Ryan Ellis from the Nashville Predators in exchange for defenseman Philippe Myers and forward Nolan Patrick. The Predators then traded Patrick to the Vegas Golden Knights for forward Cody Glass. 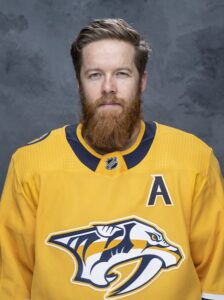 SPECTOR’S NOTE: A major move right before the 3 pm ET expansion-draft roster freeze. This signals a shakeup among the Predators’ core, a big move by the Flyers to improve their defense, and the possibility of a change of scenery helping two former first-round draft picks get their once-promising careers back on track.

Ellis has also been hampered by injuries in recent years. He played just one full season (2018-19) in the last four. When healthy, he should provide that veteran experience, skill and leadership the Flyers were lacking on their blueline this season. However, his health could be a concern going forward, especially carrying a $6.25 million annual cap hit for the next six seasons.

Myers, 24, struggled in his sophomore campaign with the Flyers. The 6-foot-5, 210-pounder has potential as a shutdown rearguard and could realize his full potential with the Predators. He’s signed through 2022-23 at an affordable $2.25 million per season.

Centers Patrick (second overall, 2017 draft) and Glass (sixth overall, 2017) both had difficulties playing up to expectations as high first-round picks. Patrick also battled migraines that sidelined him for the entire 2019-20 season. He could fill a checking-line role in Vegas. Glass struggled to earn a regular roster spot with the Golden Knights but could get more playing time on the retooling Predators.

← NHL Rumor Mill - July 17, 2021 NHL Morning Coffee Headlines - July 18, 2021 →
We use cookies on our website to give you the most relevant experience by remembering your preferences and repeat visits. By clicking “Accept”, you consent to the use of ALL the cookies.
Do not sell my personal information.
Cookie SettingsAccept
Manage consent