NHL.COM: The Seattle Kraken finally have a full roster as they made their 30-player selections in their expansion draft yesterday. Mark Giordano, Jordan Eberle and Yanni Gourde were among the notable players chosen by the Kraken. 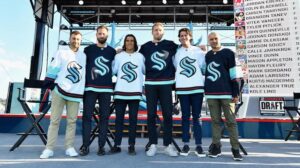 The Seattle Kraken officially announced their roster on July 21. (NHL.com).

Gourde will have to wait for a little way to make his debut with the Kraken after undergoing shoulder surgery this week. His recovery period is estimated to be four months.

Adam Larsson, Chris Driedger and Jamie Oleksiak were considered draft selections from the Edmonton Oilers, Florida Panthers and Dallas Stars respectively after signing new contracts with the Kraken. The trio was slated to become unrestricted free agents on July 28 but the Kraken had a three-day window to exclusively negotiate with free agents exposed in the draft.

Larsson signed a four-year, $16 million contract. Driedger’s new deal is for three years and is worth an annual average value of $3.5 million while Oleksiak’s is for five years with a $4.6 million AAV.

SPECTOR’S NOTE: The unofficial Kraken roster I posted yesterday based on media links throughout the day turned out to be the official list. You can read my take on the expansion draft on Bleacher Report.

The Kraken’s home opener is slated for Oct. 23 against the Vancouver Canucks. The NHL’s full 2021-22 schedule will be released on Thursday.

No side deals emerged during the draft despite weeks of hype. General manager Ron Francis was asked if he has any trades in hand that could be unveiled when the expansion draft roster freeze is lifted at 1 pm ET today. “Probably a lot less than you guys think there might be,” he said.

TSN: The Boston Bruins are reportedly closing in on a new deal for left wing Taylor Hall. Darren Dreger expects it’ll be a four-year contract worth close to $24 million in total.

SPECTOR’S NOTE: Not a surprise. Most of the speculation about Hall’s negotiations with the Bruins suggested a three-to-four year contract worth around $6 million annually.

SPORTSNET: Mike Smith is reportedly returning to the Edmonton Oilers. The 39-year-old goaltender is expected to ink a two-year deal worth around $2 million annually.

SPECTOR’S NOTE: Not a bad cap hit but it’s still a bit of a gamble to invest more than one year into a goalie who turns 40 in March. It remains to be seen who will share the netminding duties with Smith. The Oilers are reportedly shopping Mikko Koskinen. He has a year left on his deal worth $4.5 million but they can’t find any takers. There are no immediate plans to buy him out.

Speaking of the Oilers, they’ve engaged in preliminary contract talks with Tyson Barrie after losing defenseman Adam Larsson to the Kraken in the expansion draft.

THE BUFFALO NEWS: The Sabres have started contract discussions with Rasmus Dahlin. The 21-year-old defenseman is a restricted free agent after coming off his three-year entry-level contract.

MONTREAL GAZETTE: The Canadiens hired Trevor Letowski as an assistant coach. He spent the past 10 years coaching in the Ontario Hockey League, the last three as head coach of the Windsor Spitfires.

← Unofficial Seattle Kraken Roster NHL Rumor Mill - July 22, 2021 →
We use cookies on our website to give you the most relevant experience by remembering your preferences and repeat visits. By clicking “Accept”, you consent to the use of ALL the cookies.
Do not sell my personal information.
Cookie SettingsAccept
Manage consent