With the expansion draft over, here’s the latest on the Kraken, Oilers, Islanders, Canadiens, Capitals, Senators, Kings and Sharks in today’s NHL rumor mill.

TIME TO GET KRAKEN IN THE TRADE AND UFA MARKETS?

RDS.CA: Francois Gagnon reports the Seattle Kraken’s inaugural roster is thin on scoring punch. However, that could change once the expansion draft roster freeze lifts at 1 pm ET Thursday.

Francis has approximately $29 million in salary-cap space to put toward adding players to help his club over the short and long term. The Kraken GM could target cap-strapped clubs looking to shed salary. He could also try his luck in the free-agent market when it opens on July 28.

SPECTOR’S NOTE: Trades involving the Kraken could be announced as early as today following the lifting of the roster freeze. It will be interesting to see how Francis navigates the trade and free-agent markets this summer. I’ll be surprised if he doesn’t land one or two quality players before the puck drops in October.

TORONTO STAR: Kevin McGran reports Zach Hyman was in Edmonton yesterday discussing a possible long-term contract that could be announced as early as Thursday. The 29-year-old winger’s preference is to remain with the Leafs but his asking price of eight years at $5 million annually could be too much for the cap-strapped Leafs. 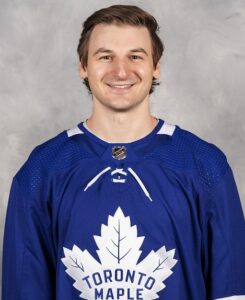 If Hyman agrees to terms with the Oilers, his rights could be traded to Edmonton before the free-agent market opens on July 28. It’s believed the Leafs would want draft picks in return. The winger has drawn interest around the league, with one offer (not from the Oilers) said to be as high as $7 million annually. Hyman is only interested in playing for a contender.

SPECTOR’S NOTE: The reason for the sign-and-trade is for the Oilers to get an extra year on the contract. Teams can re-sign players to a maximum of eight years. Unrestricted free agents from other teams can be signed for no more than seven years.

Whoever the general manager is that’s offering Hyman $7 million should be fired at once. The winger’s a good player but he’s not worth $7 million per season. With some GMs apparently succumbing to auction fever already, Hyman’s going to make a lot of money on his next contract.

SPORTSNET: Mark Spector reports the Oilers are trying to figure out how to replace Adam Larsson following his signing with the Seattle Kraken yesterday. General manager Ken Holland will look at bringing back Tyson Barrie but they still need a shutdown defenseman on the right side. If Barrie is signed, Ethan Bear could become a trade candidate.

Should Holland pass on Barrie, his options in the free-agent market include Tampa Bay’s David Savard or Vancouver’s Travis Hamonic.

SPECTOR’S NOTE: Reports yesterday indicated the Oilers were circling back to Barrie. He seeks a long-term deal that could prove more expensive than the four-year, $16 million contract Larsson signed with the Kraken. Savard could cost less than Barrie but perhaps a little more than Larsson.

THE ATHLETIC: With Jordan Eberle gone, Arthur Staple wondered what the New York Islanders will do with the cap space they’ve freed up. Eberle’s selection by the Kraken in the expansion draft plus the recent trades of Nick Leddy to Detroit and Andrew Ladd to Arizona give the Isles over $17.6 million in cap room.

The Islanders have also been linked to St. Louis Blues winger Vladimir Tarasenko and Colorado Avalanche winger Gabriel Landeskog. Adding one or the other could involve making a cost-cutting move.

SPECTOR’S NOTE: Staple also noted the Islanders can put the permanently sidelined Johnny Boychuk ($6 million annual cap hit) on long-term injury reserve if necessary to free up additional cap room. They could go that route depending on what it takes to re-sign those RFAs and Cizikas. Landeskog will cost a fortune as a free agent so I don’t see a fit there. Tarasenko is a possibility in the trade market but making the dollars work will be difficult.

SPECTOR’S NOTE: The Canadiens’ rumored pursuit of both players could depend on what the future holds for Shea Weber and Jonathan Drouin. They have over $14 million in cap space but could get more wiggle room if necessary should Weber ($7.85 million) and/or Drouin ($5.5 million) end up on long-term injury reserve.

The Canadiens’ supposed interest in Beauvillier is tied to the small number of Quebec-born players on their roster. Drouin and Phillip Danault were the only two in the lineup this season and Danault is expected to depart via free agency next week. I think Beauvillier will be staying on Long Island. The Coyotes, meanwhile, are rebuilding their roster and believed to be listening to offers for Dvorak.

NBC SPORTS WASHINGTON: J.J. Regan reports the Seattle Kraken’s selection of goaltender Vitek Vanecek leaves the Capitals facing a salary-cap crunch. They have just $8.9 million in cap space with captain Alex Ovechkin and goalie Ilya Samsonov to re-sign. They also have to find a replacement for Vanecek.

With eight defensemen under contract, the Capitals could end up moving one of Dmitry Orlov ($5.1 million cap hit), Brenden Dillon ($3.9 million), Justin Schultz ($4 million) or Nick Jensen ($2.5 million). Depending on the cost of re-signing Ovechkin and Samsonov, that still might not be enough. A bolder move could be trying to trade center Evgeny Kuznetsov and his $7.8 million cap hit.

SPECTOR’S NOTE: A salary dump or two is in the cards for the Capitals this summer. Kuznetsov’s been a fixture in the rumor mill for weeks but his cap hit and personal baggage could be difficult to move without tossing in a sweetener like a draft pick or prospect.

UPDATES ON THE SENATORS, KINGS AND SHARKS

OTTAWA SUN: Bruce Garrioch reports Chris Tierney may have played his final game with the Senators. He and forward Evgenii Dadonov and defenseman Josh Brown were exposed in the expansion draft.

Garrioch also reports the Los Angeles Kings are willing to move their first-round pick (eighth overall) in this year’s draft.

THE ATHLETIC’s Kevin Kurz reports the San Jose Sharks are seeking a veteran goaltender to pair with recently acquired Adin Hill. That means Martin Jones has played his final game with the Sharks.

← NHL Morning Coffee Headlines - July 22, 2021 NHL Morning Coffee Headlines - July 23, 2021 →
We use cookies on our website to give you the most relevant experience by remembering your preferences and repeat visits. By clicking “Accept”, you consent to the use of ALL the cookies.
Do not sell my personal information.
Cookie SettingsAccept
Manage consent