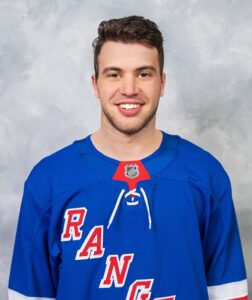 Tony DeAngelo is expected to be bought out of his contract later this month (NHL Images).

Topping his list is New York Rangers defenseman Tony DeAngelo. The Blueshirts have reportedly finalized plans to buy out the final season ($4.8 million annual average value) of his contract.

SPECTOR’S NOTE: DeAngelo has played his final game with the Rangers. While his defensive game needs work he’s a skillful puck-moving blueliner. Given his personal baggage, however, the question is whether another NHL club will take a chance on him. Rumors linked him to the Calgary Flames and Montreal Canadiens before the April 12 trade deadline.

Seravalli pointed out Oilers general manager Ken Holland has hinted at buying out one or two contracts this summer. The 33-year-old Neal has two years with an annual average value of $5.75 million.

Johnson missed all but four games this season to injury but Seravalli observed he wasn’t on the list of players exempted from the upcoming expansion draft due to injury. He suggested placing Johnson on long-term injury reserve might be the better way to go for the Avs. Johnson has two years left at $6 million annually.

Yandle was a healthy scratch during the Panthers’ playoff series against the Tampa Bay Lightning. The 34-year-old has two years remaining on his deal with an AAV of $6.35 million.

Seravalli suggests the Sharks buy out Jones and use the cap savings to put toward his replacement. The 31-year-old netminder has three years remaining at $5.75 million AAV.

SPECTOR’S NOTE: Holland could buy out Neal but there’s also talk of shipping him to the Chicago Blackhawks in exchange for Duncan Keith, whereby the Blackhawks would buy him out.

Putting Johnson on LTIR sounds like a better option. However, a buyout might be the only choice if it appears he’ll be healthy to return next season. The Avs need cap space to re-sign Cale Makar, Philipp Grubauer and Gabriel Landeskog.

Yandle surfaced in the rumor mill back in January when it appeared he would become a healthy scratch to start the season, putting his Ironman streak in jeopardy. That talk died down when the 34-year-old blueliner never missed a game during the regular season.

There might be a trade market for Yandle if he agrees to waive his no-movement clause. However, the Panthers would either have to absorb part of his cap hit, take back a bad contract, or try to work a three-way deal.

Jones has really struggled over the last three seasons. The Sharks need more consistency between the pipes. Buying him out, however, would result in six years of dead cap space (stick tap to Cap Friendly) totaling over $12 million.

Minnesota Wild winger Zach Parise is No. 6 on Seravalli’s list. He suggests they “bite the bullet” and use the savings for next season to re-sign Kirill Kaprizov and Kevin Fiala.

SPECTOR’S NOTE: A Parise buyout seems unlikely. It’s eight years of dead cap space. They’d get a $2.3 million cap hit for next season, but it jumps to over $6.3 million in 2022-23 and over $7.3 million annually for the following two seasons. The only real cap relief would come in the final four years at over $833k per season.

SPECTOR’S NOTE: The Canucks tried to trade Virtanen but couldn’t find any takers. A buyout seems likely given his on-ice struggles and off-ice issues.

Bishop missed all of the 2021-22 schedule recovering from knee surgery but Seravalli indicated he worked out with the club toward the end of the season. He could be bought out if healthy but they might not go that route if Anton Khudobin is selected in the expansion draft. Seravalli suggests a buyout of Bishop would enable them to protect Khudobin as Jake Oettinger is exempt but that might not be in their plans.

Seravalli pointed out the Canadiens put Byron on waivers three times during the regular season. However, his performance in this year’s playoffs probably means he’ll be back next season. The Habs could consider other options to free up some cap space.

Milano only played six games last season with the Ducks. With a year left on his contract at $1.7 million, he could become a buyout candidate, though the savings ($500K) are minimal.

← NHL Morning Coffee Headlines - July 7, 2021 NHL Morning Coffee Headlines - July 8, 2021 →
We use cookies on our website to give you the most relevant experience by remembering your preferences and repeat visits. By clicking “Accept”, you consent to the use of ALL the cookies.
Do not sell my personal information.
Cookie SettingsAccept
Manage consent