NHL.COM: The Tampa Bay Lightning are Stanley Cup champions for the second straight year following a 1-0 victory over the Montreal Canadiens in Game 5 of the Final, winning the series four games to one. 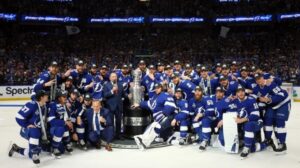 Ross Colton scored the game’s only goal while Andrei Vasilevskiy turned in a 22-save shutout. Vasilevskiy was awarded the Conn Smythe Trophy as playoff MVP. Canadiens goaltender Carey Price made 29 saves.

THE SPORTING NEWS: Lightning winger Pat Maroon became just the fourth player in NHL history to win three straight Stanley Cups with two different teams. Maroon won his first with the St. Louis Blues in 2019 before joining the Lightning as a free agent.

SPORTSNET: Lightning winger Alex Killorn revealed he suffered a fractured fibula during Game 1 of the Stanley Cup Final. He underwent surgery last week to have a rod inserted in his leg and hoped to be ready to play in Game 6 or 7 if the series went that far.

THE SCORE: Lightning winger Nikita Kucherov ripped Montreal fans for the wild celebration of their club’s victory in Game 4 during his post-game press conference. “I didn’t want to go back to Montreal, but they acted, the fans in Montreal, come on. They acted like they won the Stanley Cup last game. You kidding me? Their final was last series.”

Appearing shirtless and chugging a beer, Kucherov also tore into Vezina Trophy voters for selecting Vegas Golden Knights goalie Marc-Andre Fleury over Vasilevskiy. “I was telling him every day, ‘Vasy, you’re MVP. You’re the best player.’ And then they gave it to whatever the guy in Vegas, the Vezina. And then last year, they gave (the) Vezina to somebody else. No. 1 bullshit!”

MONTREAL GAZETTE: Montreal goalie Carey Price blamed himself for his club’s loss in the Stanley Cup Final. “At the end of the day I just don’t think I played well enough at the start of the series,” he said during a post-game press conference.

Seated next to Price, Canadiens captain Shea Weber disagreed. “I don’t think that’s the case at all”, said Weber. “To be honest, I think that we weren’t good enough in front of Carey.” He also praised the Lightning. “Give them credit, they’re a heck of a team. They’re here for a reason and they were better than us in the end.”

SPECTOR’S NOTE: Congratulations to the Lightning on becoming the third team to win consecutive Cups since the Pittsburgh Penguins (2016, 2017) and the Detroit Red Wings (1997, 1998) within the last 25 years. They were unquestionably the best team in this series and throughout this year’s postseason.

Changes will be coming to the Lightning this summer as salary-cap constraints and the expansion draft could cost them two or three players. I’ll have more on that in the Rumors section.

This was also a heck of a run for the underdog Canadiens, overcoming the odds and defying the critics by upsetting three heavily-favored opponents to reach the Final. Whether they can build on this going forward will in part depend on whatever moves they make in the offseason.

NBC SPORTS: This year’s Stanley Cup Final marked the end of a 16-year affiliation between NBC Sports and the NHL. The league recently signed new broadcasting deals with ESPN and Turner Sports starting next season.

CALGARY SUN: Plans for a new arena in Calgary are running as much as $60 million over its $550 million budget.

THE ORANGE COUNTY REGISTER: Newell Brown has returned to the Anaheim Ducks for his third stint as an assistant coach with the team. He was an assistant in 1998-2000 and from 2005-2010. He spent the past four seasons with the Vancouver Canucks.

← NHL Rumor Mill - July 7, 2021 NHL Rumor Mill - July 8, 2021 →
We use cookies on our website to give you the most relevant experience by remembering your preferences and repeat visits. By clicking “Accept”, you consent to the use of ALL the cookies.
Do not sell my personal information.
Cookie SettingsAccept
Manage consent