NHLPA.COM: The hearing dates have been set for players who selected salary arbitrations last week: 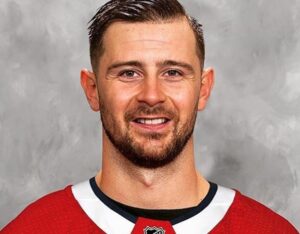 NORTHJERSEY.COM: The New Jersey Devils signed Tomas Tatar to a two-year, $9 million contract. The 30-year-old winger spent the past three seasons with the Montreal Canadiens.

SPECTOR’S NOTE: Bang goes my theory of the Devils acquiring St. Louis Blues winger Vladimir Tarasenko via trade. Tatar reached or exceeded 20 goals six times between 2014-15 and 2019-20 and 45-plus points five times. He’ll likely slot in alongside Nico Hischier or Jack Hughes on the Devils’ top-two lines. Tatar is the third significant UFA signing by the Devils this summer, joining Dougie Hamilton and Jonathan Bernier.

THE SCORE: Speaking of the Devils, they signed winger Yegor Sharangovich to a two-year, $4 million contract.

SPECTOR’S NOTE: According to Cap Friendly, these moves leave the Devils with $14.7 million in projected cap space with restricted free agent Janne Kuokkanen to sign. They still have plenty of room to make another significant addition if they so choose.

THE TENNESSEAN: The Nashville Predators avoided salary arbitration with Dante Fabbro, signing the 23-year-old defenseman to a two-year, $4.8 million contract.

SPECTOR’S NOTE: The Predators have over $17.6 million in projected cap space with Juuse Saros and Eeli Tolvanen to re-sign.

DAILY FACEOFF: Frank Seravalli reports the NHL is projecting an increase in the salary cap by $1 million for 2022-23. It will be the first raise in the cap since COVID-19 affected the league’s business operations, delinking the salary cap from revenue and creating a $1 billion debt that players are still working to pay back to the owners.

Seravalli believes the anticipated increase in revenue when the NHL resumes a normal 82-game season in 2021-22 could trigger a “lag formula” agreed upon by the owners and players in the CBA extension. Starting in 2022-23, the cap will increase by $1 million each season until 2025-26, when the players’ debt is expected to be repaid should revenue rebound strongly over that period.

Should the debt be repaid by the end of 2025-26, Seravalli indicates the CBA would automatically extend by one season to 2026-27. The cap would revert back to the usual formula where it is tied to actual revenue projections.

SPECTOR’S NOTE: The debt Seravalli refers to stems from the artificially set cap of $81.5 million for last season and this season. League revenue was far less than projected because of the pandemic. The cap would’ve been significantly lowered had it remained tied to revenue, forcing teams to shed salary. That would’ve been almost impossible because most teams would’ve lacked sufficient cap space to acquire those contracts. It also would’ve left a large number of free agents unsigned.

Instead, it was agreed the cap would be decoupled from revenue and artificially set at $81.5 million. That created an imbalance as the players were receiving most of the revenue. Because the CBA mandates a 50-50 split, the players have to pay back the excess via escrow to make the owners whole.

NHL’s coffers should receive a boost from its new broadcasting deals with ESPN and Turner plus the addition of the Seattle Kraken. Nevertheless, it remains largely a gate-driven league. The number of fans returning to the arenas post-pandemic will determine how much revenue increases. As Seravalli points out, short of a revenue bonanza, the cap will only slowly rise over the next five seasons.