​What can the Leafs do to address their short- and long-term salary-cap issues? What’s the latest on the Panthers? Find out in today’s NHL rumor mill.

TORONTO SUN: Steve Simmons took note of young defensemen such as Edmonton’s Darnell Nurse, Colorado’s Cale Makar, Chicago’s Seth Jones and Dallas’ Miro Heiskanen landing long-term deals worth over $8 million. He believes the going rate for a 27-year-old blueliner like the Leafs’ Morgan Rielly is around $8 million per season, which is a big raise over his current $5 million annual cap hit. 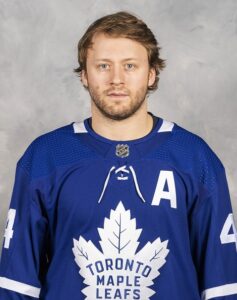 He believes the Leafs face a challenging decision with Rielly. Do they re-sign him? Do they let him depart via free agency next summer? If they re-sign him, how will they clear sufficient cap space for his new contract?

Complicating things further is goaltender Jack Campbell will also become eligible for unrestricted free agent status next summer. Simmons speculates it could the Leafs $6 million they don’t have to keep them both.

SPECTOR’S NOTE: That’s why some observers believed the Leafs could trade Rielly this summer rather than risk losing him next summer for nothing. However, management is sticking with its core (which includes Rielly, their best puck-moving defenseman) for the coming season.

Cap Friendly shows the Leafs with $67.78 million invested in 14 players for 2022-23. Assuming the cap rises that season by $1 million, that’ll leave the Leafs with $14.7 million in projected cap space. If they re-sign Rielly for $8 million annually, they’ll have only $6.7 million left to re-sign Campbell and promising blueliner Rasmus Sandin, leaving nothing to fill out the rest of the roster.

They could let Rielly walk or shop him before the trade deadline. However, that will leave a big hole on their blueline that could prove difficult to fill.

Simmons also observed the Maple Leafs are above the salary cap but don’t have to be cap compliant until the start of the regular season. He wonders which players will be waived in training camp or whether Alex Kerfoot will be moved in a cost-cutting trade.

SPECTOR’S NOTE: The Leafs are 1.394 million over the $81.5 million cap. They also have 15 forwards under contract. Rather than trade Kerfoot, they’ll likely attempt to demote two or three of those extra forwards or see one or two of them claimed by other clubs via waivers.

FLORIDA HOCKEY NOW: In a recent mailbag segment, George Richards was asked about how things stand with new contracts for Aleksander Barkov and Sam Reinhart. He anticipates new deals for both could be announced later this summer.

Regarding rumors linking the Panthers to Zdeno Chara, Richards believes they want to add another veteran defenseman but he’s not sure if Chara is the right fit. He also acknowledged the trade rumors about winger Frank Vatrano before the expansion draft. While nothing came of them, he didn’t rule out the possibility of a training camp deal.

Richards also predicted Sergei Bobrovsky could be moved out in 2023 “one way or another” but it won’t be a contract buyout.

SPECTOR’S NOTE: Bobrovsky will have just three years remaining on his contract following 2022-23. However, he must waive his no-movement clause first. The Panthers will also have to pick up a healthy chunk of his $10 million annual average value to facilitate a trade. Even then, they won’t get much interest in Bobrovsky if his performance doesn’t improve by that point.

← NHL Morning Coffee Headlines - August 9, 2021 NHL Morning Coffee Headlines - August 10, 2021 →
We use cookies on our website to give you the most relevant experience by remembering your preferences and repeat visits. By clicking “Accept”, you consent to the use of ALL the cookies.
Do not sell my personal information.
Cookie SettingsAccept
Manage consent