CHICAGO SUN-TIMES: The Blackhawks yesterday signed Connor Murphy to a four-year contract extension. The 28-year-old defenseman will earn an annual average value of $4.4 million through 2025-26. 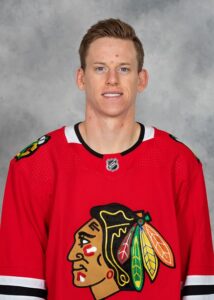 SPECTOR’S NOTE: Murphy gets a slight pay bump from the $3.85 million AAV of his current deal that expires at the end of this season. He should fill the second-pairing right-side role on the Blackhawks blueline with Seth Jones holding the first-pairing spot on their rebuilt defense corps. He’s also expected to take on more of a leadership role.

THE ATHLETIC’s Arthur Staple tweeted Casey Cizikas appears to have a new contract with the New York Islanders. He’s heard it’s a six-year deal at around $2.5 million annually.

SPECTOR’S NOTE: The term of Cizikas’ new deal seems excessive for a 30-year-old checking line forward but it’s an affordable annual average value. The length of the deal was likely what it took to get Cizikas to accept that annual cap hit.

Islanders general manager Lou Lamoriello still hasn’t officially announced Cizikas’ new deal but it’s the first indication that one of the club’s unrestricted free agents has been signed. The secretive Lamoriello reportedly doesn’t want his rivals to know how much salary-cap space he actually has.

Kyle Palmieri and Travis Zajac also remain unsigned but speculation persists they’re also under contract with the Islanders. The same goes for former Minnesota Wild winger Zach Parise, who’s been linked to the Isles in the offseason rumor mill.

THE MERCURY NEWS: Embattled San Jose Sharks winger Evander Kane is selling his San Jose home for almost $3.2 million. Kane filed for bankruptcy in January and is going through a messy divorce from his estranged wife Anna, who accused him of gambling on Sharks’ games. Those allegations are under investigation by the NHL.

SPORTSNET’s Elliotte Friedman tweeted former NHL forward Patrick Sharp is returning to his roots as a coaching advisor with the University of Vermont’s Men’s Hockey Team. Sharp played for them from 2000 to 2002.

SPECTOR’S NOTE: The Sun greeted this news with derision. “Were the voters four years old?”, they asked, calling the Leafs mascot “bland and uninspiring.”

← NHL Rumor Mill - August 31, 2021 NHL Rumor Mill - September 1, 2021 →
We use cookies on our website to give you the most relevant experience by remembering your preferences and repeat visits. By clicking “Accept”, you consent to the use of ALL the cookies.
Do not sell my personal information.
Cookie SettingsAccept
Manage consent