Anders Lee looks forward to returning from a knee injury, Dylan Cozens hopes to take on a larger role with the Sabres, the Blues unveil their 2022 Winter Classic jersey, and more in today’s NHL morning coffee headlines.

NEWSDAY: New York Islanders captain Anders Lee is excited about returning to action after being sidelined in March by a torn ACL in his right knee. He still needs medical clearance before rejoining his teammates when training camp opens on Sep. 22. 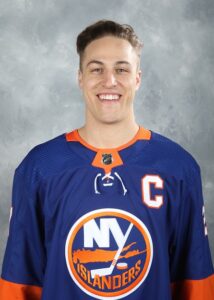 SPECTOR’S NOTE: Lee will likely get that clearance when he undergoes his training camp medical. The Islanders missed his presence on their top line down the stretch last season and in the 2021 playoffs.

WGR 550: Buffalo Sabres sophomore center Dylan Cozens believes his club is going to surprise people this season, pointing out the club’s improvement during the second half of last season. The 20-year-old Cozens also believes he can take on a leadership role. “I’ve always seen myself as a leader,” he said. ” I want to lead by example and be a guy that guys can look to if they need anything or look to to inspire them.”

SPECTOR’S NOTE: The Sabres are heading into another rebuild. Cozens could play a key role in that process, especially if current captain Jack Eichel gets traded as anticipated later this season.

NBC SPORTS: The St. Louis Blues unveiled their jerseys for the 2022 Winter Classic against the Minnesota Wild on Jan. 1, 2022, at Target Field in Minneapolis. The jersey is described as offering “a modern spin on an original worn in 1967”, the year the Blues joined the NHL.

SPECTOR’S NOTE: It looks pretty good too. I’ve always been a fan of the Blues’ jersey from their early years in the NHL.

NBC SPORTS BAY AREA: Marcus Sorensen confirmed he’s returning to Sweden after five seasons with the San Jose Sharks. The 29-year-old left winger tallied 31 goals and 64 points in 226 NHL games. He’ll be suiting up this season with the SHL’s Djugardens IF.

TRIBLIVE.COM: The Pittsburgh Penguins recently hired Charles Grant and Kain Tisi as goaltending development coaches. They replace Andy Chiodo, who was promoted to goalie coach at the NHL level.

← NHL Rumor Mill - September 11, 2021 Sunday NHL Rumor Roundup - September 12, 2021 →
We use cookies on our website to give you the most relevant experience by remembering your preferences and repeat visits. By clicking “Accept”, you consent to the use of ALL the cookies.
Do not sell my personal information.
Cookie SettingsAccept
Manage consent