QUENNEVILLE RESIGNS AS PANTHERS COACH, CHEVELDAYOFF HAS A MEETING TODAY WITH BETTMAN 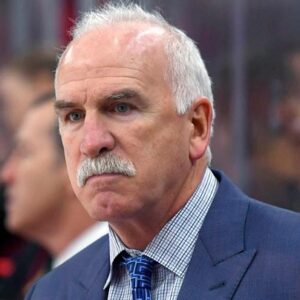 This move is a result of an independent investigation into sexual assault allegations made by former Blackhawk Kyle Beach against the club’s former video coach Bradley Aldrich during the 2010 Stanley Cup playoffs. Quenneville told investigators he first heard of the allegations through the media but it was determined he was part of the meeting of front office executives to discuss the matter.

The Panthers released a statement that the conduct described in the report on the investigation was “troubling and inexcusable”, adding it stood in direct contrast to their values as an organization and what the club stood for.

SPECTOR’S NOTE: But not so much to keep Quenneville from being behind the Panthers’ bench against the Boston Bruins on Wednesday, just one day after the report’s findings were released. It’s puzzling why they didn’t at least do that until Quenneville had his meeting with Bettman. It was a bad look for the Panthers.

According to the report’s findings, Quenneville recommended the Blackhawks wait to take action against Aldrich until after the playoffs so as to avoid any unnecessary distractions for their players as they pursued the Stanley Cup.

Quenneville was once a highly-respected NHL head coach with three Stanley Cups and a Jack Adams Award on his resume. He’s second all-time in wins (969) among the league’s bench bosses. All of that is meaningless now. I doubt he’ll ever coach another game in the NHL again.

TSN: Winnipeg Jets general manager Kevin Cheveldayoff will meet with Bettman in NHL headquarters today. The meeting was moved up from Monday. Cheveldayoff was the Blackhawks assistant GM and took part in that fateful meeting about Beach’s allegations against Aldrich.

SPECTOR’S NOTE: There are numerous calls on social media for Cheveldayoff’s firing but a recent report indicated he had the support of Jets ownership. Where he stands following his meeting today with Bettman remains to be seen.

Kyle Beach released a statement on Twitter yesterday expressing gratitude for “the outpouring of endless love and support” he’s received since stepping forward to identify himself as the player allegedly sexually assaulted by Aldrich. He expressed the hope his story would bring about change “to promote safety, as well as the health and well-being of society as a whole.”

SPECTOR’S NOTE: I cannot even imagine what Beach endured as a sexual assault survivor over the past decade. I hope his story brings about the change he seeks and the peace he deserves.

The league is reportedly going to implement “enhanced training measures” specific to dealing with sexual abuse and allegations of abuse. A third party will be employed to handle this with league oversight. Any report or hint of sexual abuse or assault will be immediately reported to the commissioner’s office.

Aldrich still has his name on the Stanley Cup. TSN reports it’s up to the Blackhawks to file a petition to the league to have his name removed. So far, that has not yet taken place.

THE SCORE: Boston Bruins winger Taylor Hall called for a change in hockey culture. “This is a game that’s, I guess, what you would call an old boys’ club, and there’s definitely some secrecy and things that need to change. Hopefully, they can.”

NHL.COM: The Carolina Hurricanes set a franchise record for their longest season-opening win streak by blanking the Boston Bruins 3-0. The Hurricanes have won six in a row as Frederik Andersen turned in a 33-save shutout. Tony DeAngelo, Nino Niederreiter and Andrei Svechnikov were the goal scorers.

Cale Makar had a goal and an assist to collect his 100th career point in the Colorado Avalanche’s 4-3 victory over the St. Louis Blues. He’s reached that mark in the sixth-fewest games (108) by NHL defensemen. J.T. Compher scored twice for the Avalanche. Blues goaltender Jordan Binnington received a 10-minute misconduct for swinging his stick at Avs center Nazem Kadri.

The Calgary Flames completed the sweep of their five-game road trip by downing the Pittsburgh Penguins 4-0. Jacob Markstrom kicked out 45 shots for the shutout while Johnny Gaudreau tallied his first goal of the season.

Jake Allen also had a 45-save shutout in the Montreal Canadiens’ 4-0 win over the San Jose Sharks. Josh Anderson had a goal and an assist for the Habs as they picked up their first win in San Jose since 1999.

Tampa Bay Lightning winger Alex Killorn netted two goals in his club’s 5-1 victory over the Arizona Coyotes. It was the Lightning’s first home win of the season. Steven Stamkos had a goal and an assist.

The Buffalo Sabres blew a 3-0 lead but an overtime goal by Rasmus Asplund gave them a 4-3 victory over the Anaheim Ducks. The Sabres’ record stands at 5-1-1 while the Ducks are winless (0-3-2) in their last five. Ducks center Adam Henrique picked up his 200th career goal.

Sean Couturier and Claude Giroux each collected two points as the Philadelphia Flyers nipped the Vancouver Canucks 2-1. Martin Jones got the win with 27 saves. Quinn Hughes replied for the Canucks.

The Seattle Kraken got two goals by Haydn Fleury to defeat the Minnesota Wild 4-1. Philipp Grubauer turned aside 30 shots for the win. The expansion Kraken has won two straight on home ice. The Wild played without Mats Zuccarello and Rem Pitlick as both entered COVID protocol yesterday.

NEW YORK POST: Islanders goaltender Semyon Varlamov said he’s fully recovered from his undisclosed injury and is ready to return to action. He missed all of training camp and the Isles’ regular-season games to date.

THE COLUMBUS DISPATCH: Blue Jackets forward Max Domi has recovered faster than anticipated from a fractured rib. The club took him off injured reserve yesterday and he could be in the lineup tonight against the New York Rangers.

SPECTOR’S NOTE: That could turn into quite the bargain for the Golden Knights if he should turn into a top-four shutdown defenseman.